How to Create Excitement in Your Music with Tremolo

Twice a month we revisit some of our reader favorite posts from throughout the history of Audiotuts+. This tutorial was first published in 2009.

Tremolo was always one of those plug-ins that my eyes completely skipped past. It wasn't until some experimenting and tips from other composers that I began to see the potential behind this simple device.

In this tutorial we'll look at some examples of how tremolo can help you make some truly interesting and unique sounds, including several techniques used to create the final piece from the "How To Create a Compelling Ostinato" tutorial.

All of the examples in this tutorial were created in Logic Pro, but the principles are universal and should apply to any tremolo plug-in in your program of choice. The goal here is to create good music, it's not the specific tools that get you there but how you use them.

One of the most basic effects we can use tremolo for is to create a pulsing rhythm, such as a driving bass.

Start with a basic sound. I've selected an interesting Zebra pad (interesting means that it is slightly complex with some motion in it) and a really nice deep low end.

Not terribly exciting yet. Let's initiate a Tremolo plug-in on the instrument and make this something we'd actually want to listen to.

We've got 5 settings to play with: Depth, Rate, Symmetry, Smoothing and Phase. 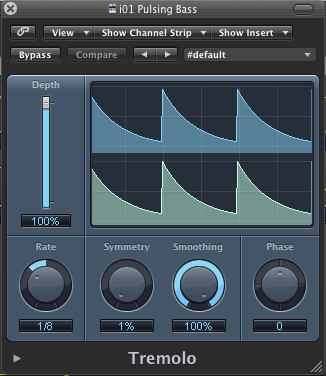 This is what our low pad sounds like now that we've added Tremolo:

And here's one example of how you could actually use this technique:

In one of my previous tutorials, "How to Create a Compelling Ostinato", the final piece used tremolo in a variety of unique ways. The next three examples are all taken from that piece.

The piece begins with a backwards snare sound. The purpose of this sound is to grab the listener's attention, so it needs to be exciting and interesting.

Here's the basic sound of a snare drum played in reverse:

It's already a somewhat interesting sound, but we can use tremolo to give it that extra bit of spice.

Here are the settings I'm using: 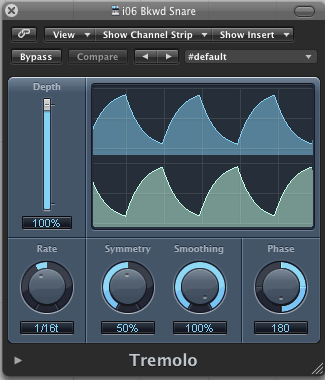 The biggest differences here are the phase and symmetry settings. The phase is now set to 180, meaning we go from the extreme left side to the extreme right side rather than loud to quiet. The symmetry is set to 50% this time so that there is an equal shift from left to right as there is back right to left.

Add a touch of reverb and the final result comes out like this:

Notice that the sound now feels like it is consuming the entire space and really pulls you in.

Another great use for tremolo is to add haunting ambience. Using a very slow rate, soft smoothing and a wide phase we can give a sound the feeling of coming in and out of nowhere or spinning around our heads.

Here is the sound we'll be using to demonstrate, a complex pad:

By this point you should be getting the hang of what these different parameters do. We've set the rate to a 1/2, so the effect is spread out over a little more time than the rhythmic effects we were using before. The phase is set to 180 so that the sound will cross over the entire stereo field and the depth is at 100% to allow the sound to go completely from one side to the other before crossing back.

In this last example we'll look at how to use tremolo with automation to create a more complex sounding idea. The basic sound is just two french horns in fifths:

The first thing we'll do is automate the panning and volume so the horns have a sense of moving from the right to the left as well as a crescendo and back down to a decrescendo. If you're not familiar with how to use automation, the concept is beyond the scope of this tutorial but I would highly recommend you learn how to use this very useful tool as soon as possible.

Here is a screenshot of the panning automation: 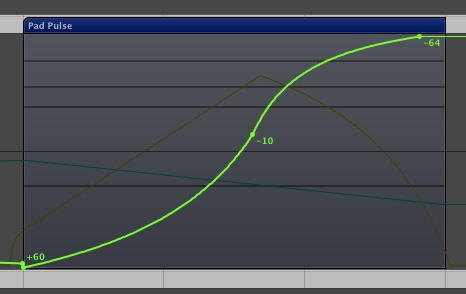 And here's the volume panning: 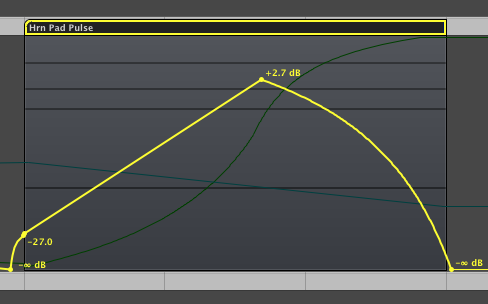 This is what our horns sound like so far:

For the tremolo settings we'll start with 100% depth so that the sound goes from completely full to complete silence. We'll set our starting rate to a dotted 32nd note (1/32d) which will feel like a very fast pulse. The symmetry should be at 50% to allow an equal amount of time between loud and quiet, and the smoothing should be at 0% so that we're either loud or silent and nothing in between. Finally the phase is set to 0 because we don't want the sound to bounce back and forth from left to right, we want it to come in and out of nothing. 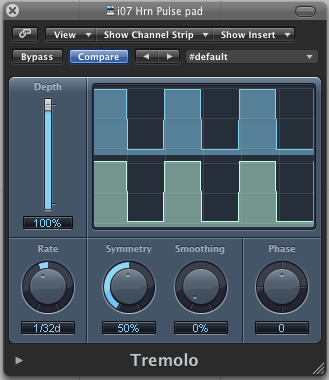 The part we are going to automate is the rate, so that the sound has a sense of "slowing down". If you're using Logic you can adjust this setting by going into automation mode, selecting the track you are working on, and clicking on the automation box under the track name (it defaults to "Volume"). In that menu you can choose tremolo -> rate. Let's slow the rate all the way from our dotted 32nd note to a 1/2 note.

Here's how that will look in automation: 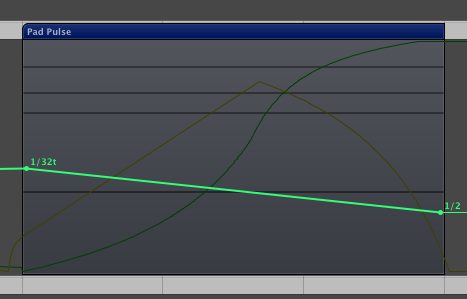 Notice that we use a straight line from one end of the rate to the other. This will allow the sound to smoothly slow down over the allotted time, in this case 3 bars.

The result of automating the tremolo:

As you can see from these examples, there is a lot of potential behind a simple and often overlooked plugin such as tremolo. The last three examples were used in context in this piece:

Please leave a comment about what creative ideas ways you've come up with to make the most out of tremolo.