The raygun or laser beam has been a defining sound for many a science fiction movie. How many of us can still hear the sound of the Rebel forces as they fend off the Stormtroopers? In this tutorial, we'll look at creating a simple ‘raygun' effect, using some fun plugins and samples with Logic 8.

Note: this tutorial contains embedded audio that will not display in a feed reader. Click back to the site to read the tutorial with audio. Thumbnail image by skipthefrogman.

The first thing we need to do for our raygun sound is to come up with a reasonable foundation - a ‘zap'. There are a number of ways to accomplish this, but I've chosen to use Logic's simple and fun EFM1 synthesizer.

In a new audio instrument track, insert an instance of the EFM1 (stereo) synth into the IO slot.

Double click the EFM1 entry in the IO channel to bring up the instrument. Here we'll enter in all of our settings to get a good, basic ZAP!

I've also recorded a couple of notes into the arrange window so that when I press ‘Play', I'll hear the raygun sound. We now have a basic raygun sound that just needs a bit more to polish it. 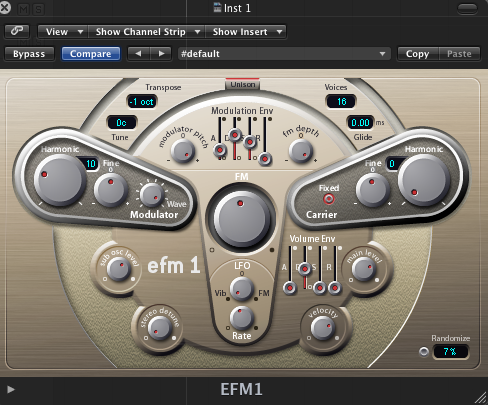 If you check your master output in Logic, you may find that your output is clipping. If that's the case, some dynamics control may be in order. I added Logic's Compressor plugin to the first Insert slot of my EFM raygun channel. I gave the compressor a fast attack, medium release, a ratio of 3.5, threshold of -10dB, Gain of 0dB, and activated the Limiter section of the plugin, with a -.2dB threshold. The sound itself remains relatively unchanged, but the output is no longer clipping, and we get a little bit more body as the sound decays. 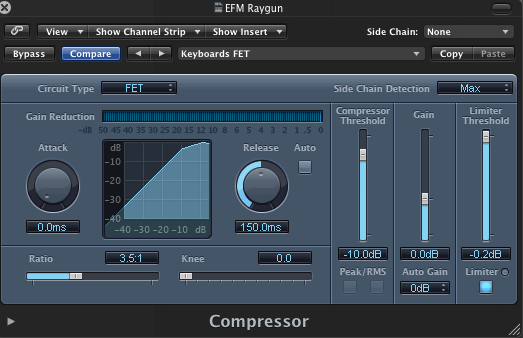 Next we'll add two Auxillary/Bus channels. In Logic 8, these are created dynamically by clicking on the ‘Sends' section of your instrument channel strip and selecting ‘Bus 1' in the first slot, and ‘Bus 2' in the second slot.

In the Mixer Window, we can select these two new Aux channels (1 and 2), and from the Options menu select ‘Create Arrange Tracks From Selected Channel Strips'. This gives us two new tracks in the arrange window - one for each Aux bus. We'll send about -3dB of signal from our raygun track to each of these two Aux channels as a starting point. 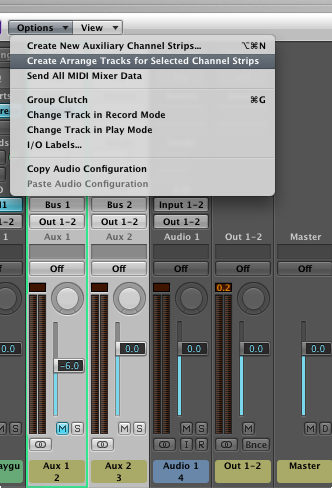 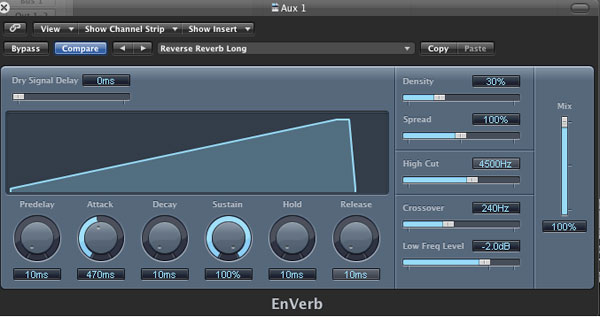 I'd like to be able to move the start of the reverb earlier, to better match the start of the sound. In order to do this, we'll need to bounce the effected track. By left-clicking on the ‘Bus 1' Send in the raygun channel, I can select ‘Pre'. This allows the signal of the raygun sound to be sent to the EnVerb channel before the fader adjusts the volume. The end result is that we can mute the raygun channel and just hear the effected version. We bounce that version to a new track, and now have an audio version of the EnVerb'd raygun.

After you've added the audio version of the reverberated raygun sound to the track window, unmute the raygun track and mute the Aux bus holding the EnVerb plugin. Now move the bounced audio of the effected raygun sound along the timeline to begin slightly ahead of the triggered/note version. Play with the timing until the two sounds blend together nicely.

One more step on and we're nearly done! We'll now use Logic's Guitar Amp Pro on the second Aux bus to give a little distortion to the final mix. In the first insert slot of Aux channel two, set up a Guitar Amp Pro insert with the Practice Amp preset selected. You may want to adjust the volume of this aux channel, as the output may overpower the initial raygun sound.

We've got all the basic components of our raygun sound. For more exploration, you may want to experiment with chopping the final version up and setting up to play back in a sampler. You may find that a slightly higher or lower pitched version of the sound works better. Alternatively, you may wish to layer this raygun sound with a more traditional sound, such as a gunshot. Using ‘real world' sounds and synthesized sounds in combination can yield excellent results.