How to Create Rhythmic Synthesizers with Reason 4's Vocoder

We often think of the vocoder as a device for effecting voices, but it’s a device that’s regularly used for a myriad of other purposes. In this tutorial, we teach you to use Reason’s BV512 Vocoder to create a rhythmic synthesizer.

Create a new project. If you’re not using Reason’s default template, clear the project of everything except the hardware device and the mixer.

Next you need to create the device that will provide the vocoder’s carrier signal. Load up a Thor. You need a sustained patch with plenty of high frequencies for a vocoder carrier signal, so I’ve selected the patch Chord 137.

Right click the Thor, go to the Create menu and set up a BV512 Digital Vocoder. By right-clicking the Thor to create the vocoder, it will be automatically routed as the carrier device.

Next, right-click the black area and create either a Redrum unit or a Dr:REX. If you’re using a Dr:REX device, hold Shift while you create it. By holding Shift while the device is created, it will not be auto-routed.

These are all the devices we need to proceed. 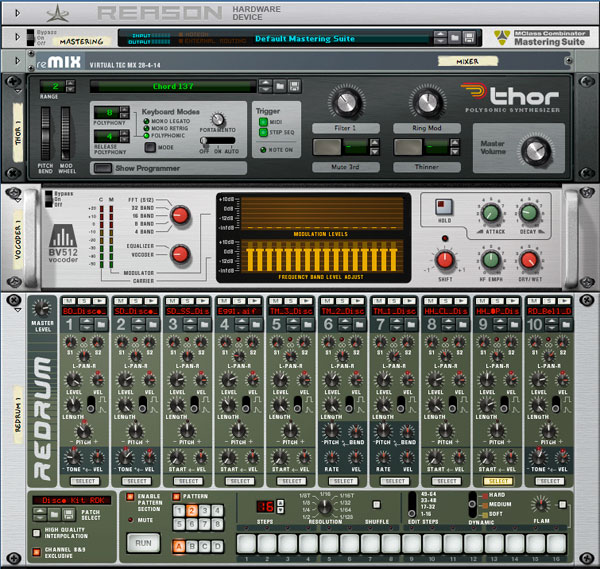 The reason we held Shift when creating a Dr:REX but not the Redrum is because we need to be able to audition the Redrum as we develop a rhythm from scratch, rather than using a pre-prepared rhythm with the Rex.

Spend some time working on a clear drum beat that represents the rhythm of the synth as you want to hear it. I’ve gone for a standard and very simple drum beat for simplicity’s sake.

Use a variety of drums, as the tonal characteristics of each drum do affect the sound of the rhythmic synthesizer. Here’s a screenshot of the kick drum pattern:

When you hear the synth later, check the pattern to locate where the kick drum effects the sound and compare the difference in impact between the kick and the snare, for instance.

Press Tab to flip the rack around. You’ll note that the Thor’s output is routed to the Carrier Inputs on the back of the vocoder, and the vocoder outputs go straight to a mixer channel. The Modulator Input takes a mono signal, so click on the Left stereo out of the Redrum and drag it to the Modulator Input jack on Vocoder’s rear.

Back on the front side of the rack, turn the Vocoder’s Dry/Wet control to the far right, so the signal is totally wet. Anything less than 100% wet and you just get a wishy washy sort of mix between the drums and the synth, not a new and interesting sound.

Define a section — four bars long if you’re not sure — in the Arrange view using the Left and Right locators, and select “Loop On/Off” on the Transport bar so that the toggle button is glowing green.

Select the Redrum sequencer track (or Dr:REX sequencer track if you’ve gone that route), right-click the corresponding drum device in the rack, and select Copy Pattern to Track. This will cause your drum beat to appear on the Redrum’s sequencer track for the duration of the section you’ve selected.

Go into Edit mode and select the Thor. Draw in a clip the length of the selection so that it matches up with the drum beat on the sequencer. Then draw in how ever many bars you need worth of chords. It doesn’t need to be anything fancy, simple ones will do:

Now you’ve got something you can actually listen to. If you’ve done it right, you’ll hear the synth with the rhythmic characteristics of the drum beat:

At this point, if you’re happy with the rhythm, the synth selection, and the chords you’ve used, you can tinker with the vocoder’s settings to refine the sound to your taste. Leave the Dry/Wet control where it is, but experiment with the Shift, HF Emph, Attack and Decay knobs until you’re happy.