How to Create Sequenced Sound Manipulations with Effectrix

Tutorials on specific plug-ins aren’t that common here on AUDIOTUTS but this one is so special it demanded our attention. Effectrix is a new performance, step-based, multi-effects processor with a really innovative interface and a pretty impressive sound.

For those of you who like the look of this plug-in and want to take it for a spin, download a fully functional demo from the Sugarbytes site, and if you would like to buy it you can find a 15% discount coupon in the play pack available for download at the end of this tutorial.

At first glance the Effectrix interface is colorful and clearly laid out. I found myself familiarizing myself with the controls within seconds of opening it for the first time. It’s one of those rare virtual devices that contains potentially complex controls in a single window, with no hidden parameters or menus. All of the controls needed to build mind-bending effects sequences are right at your fingertips and they can be constructed in a fraction of the time it would take with conventional plug-ins. 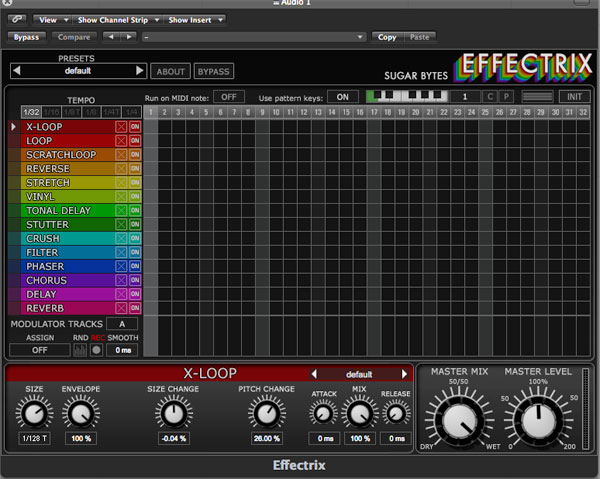 Down the left hand side is a list of the effects at the core of the Effectrix sound. All the usual suspects such as reverb, delay and chorus are here and there are also slightly more unusual offerings thrown into the mix, such as stretch, vinyl and tonal delay. On selecting any of the effects, its extended parameters become visible in the box towards the bottom of the interface, and here you will also find handy envelope and mix functions for every effect.

Move to the right of the effects list and you will see the pattern grid. This is where you ‘paint’ or ‘draw’ in your effected areas in blocks. An opaque white line will move across the grid as your project plays and anything you add will sync to your sequencers tempo. Various pattern commands such as pattern tempo, initialization and even options to start patterns via MIDI keys are located above the effects list and pattern grid.

To demonstrate all the effects Effectrix is capable of, I have selected a simple vocal phrase to process and to try and do the plug-in justice the effects have been split into small groups and will be described and auditioned together in these groups. You will hear each group of effects in isolation and then all together as a full sequence at the end of the tutorial.

The Play Pack includes the preset used so that you can load it in any sequencer, the Logic project, dry audio, effected audio and your discount coupon.

There are no less than three different looping effects on offer here, and each one has definitive sound and specific controls. Each loop mode has been engaged at some point in this pattern and by looking at the screen shot or loading the preset, you should be able to see exactly where.

Three effects are capable of changing the direction and timing of your audio and even stopping like its on vinyl.

These are two effects that are excellent for adding interest to your pattern and are extremely easy to edit.

Two truly awesome and essential effects for performance are bitcrushers and resonant filters. Sugarbytes do both justice here and then some. Perfect for twisting and mangling your sounds, these effects are great for flashing into percussion loops or vocals.

Two modulation based classics are given a Sugarbytes twist and these traditionally subtle effects actually end up being some of the most effective in the list. When flashed in during this sequence, both effects add real space and dimension, giving an almost 3D quality.

Another two effects we’ve come to know and love are reverb and delay. Undoubtedly we would feel hard done by if they were missing from the part so here they are. The sound quality on both sections is really outstanding and the parameters you would expect are all there.

A really interesting thing about these processors is that the delay or reverb tail is cut off when the effect is not engaged. This means you can produce some really cool gated effects, alternatively if you want the tail to continue then simply leave the effect switched on.

Here you can see and hear all of the processors engaged to make up a full sequence. Although this is possibly a little busier than real world patches you would build, it certainly showed the ability of the plug-in and how easy it is to program. 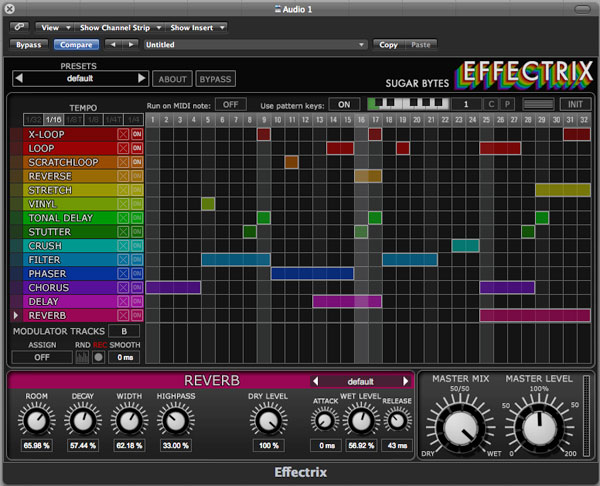 It’s worth mentioning that even with all of the processors engaged the CPU hit was minimal and used less resources than one would expect.