How to Create the Theme of Van Halen's Jump

In this tutorial I'll show you how to create the main theme of the popular synth-rock song Jump by Van Halen. We'll program the lead and bass in MIDI and mix some drum loops as well using Ableton plugins.

Create the Project in Ableton Live

Create a new project in Ableton Live with the following settings:

I coloured the lead channel green, the bass brown, and the drums blue.

I found a score at musicnotes.com, played the chords on my MIDI keyboard, recorded the notes and then quantised and edited them. The first chord is G major (G+B+D) and the last one is Csus2 (C+D+G). It's important to get the length of the chords right, because it creates a nice sense of movement.

This sound is a combination of saw (16 harmonics) and square (32 harmonics) waves made with Operator. It uses two oscillators in the last algorithm mode, and has some spread on it.

The Ping Pong Delay and Reverb makes it bigger and smoother. I also added a touch of top end EQ boost to give some air, and lo cut to add headroom when crossing with the lower frequencies. The Limiter is only there for safety reasons (catching the peaks above zero). 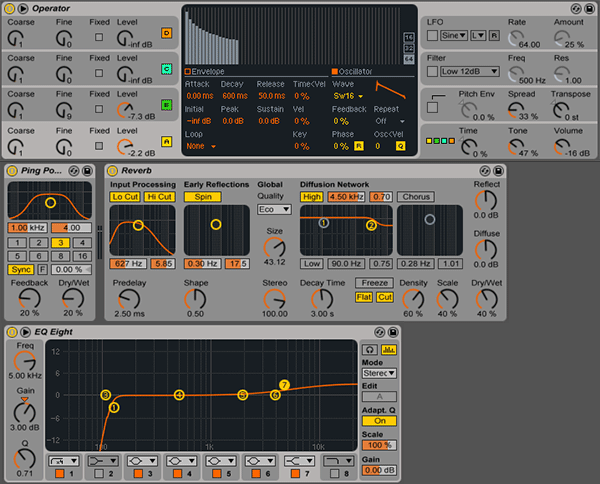 This is a basic synth bassline, which is a sustained note instead of the eighth notes played on the bass guitar. The foundation is a square wave with a strong low pass filter.

With the EQ I removed part of the subs and the high end, and also I cut the middle of the bass to give some space for the lead. This bass sound is sidechain compressed to the breaks loop.

Note that for more originality, we can make a bassline with eighth notes instead of the sustained sounding instrument. This may need some fine tuning on the amp ADSR as well.

I loaded a drum loop into the timeline and I removed the lowest subs of its spectrum. That means a 54Hz lo cut with the EQ.

I used another drum loop for top end, which is much lower in volume (-13dB), then I made it almost mono with Utility (10% width). With the Simple Delay I made it wider in time mode (1ms on the left and 12ms on the right with 100% dry/wet). The Utility is there to design the sound differently than it was in the beginning.

I used this chain on the master channel. Spectrum is there to see what is happening with the frequencies. EQ Eight for removing low frequency content on the sides (in mid/side mode). Limiter is set at +2 dB to increase the average volume. Here are the exact settings:

So that was our session of recreating Jump:

For a more detailed sound and increased depth, you can try chorus and unison. I found that the Ableton Chorus isn't good for this kind of sound, so another brand and model would be better.