How to Design Reeses and Hoovers

Have you ever wondered how your favourite dance music producers create those amazing sounds that make you jump on the dance floor? Well, it usually takes a lot of experience and a huge amount of time spent on experimenting and processing sounds a ridiculously high number of times.

But it's quite hard to reach the stage of experimentation if you don't even know the basics behind some kind of sounds often heard in dance tracks. This tutorial will teach you how to design from scratch a DnB trademark, the reese bass, and how to reproduce the infamous hoover sound, introducing you to the technique of resampling.

With all the great plug-ins and soft synths available cheaply, it's easy to forget that modern DAWs usually come with a bundle of amazing synths and plug-ins. Logic is one of these. The ES2 is a great synthesizer that allows you to create a huge variety of sounds. We're going to use it, together with the EXS24 sampler, to create a reese bass and a hoover.

However, if you follow the steps while auditioning the sound you'll be able to understand what you're doing and therefore you can use this techniques virtually on any synth and sampler.

Launch Logic, create an empty project, and create a software instrument track when prompted. Then write a 4 bars long C2 in the piano roll, activate cycle (loop), and press play. This is not necessary, but it's useful since we want to audition the sound constantly while tuning it, so we don't have to keep one hand on our keyboard all the time.

Load an ES2 instance in the track you just created. This is how the standard ES2 patch looks. The ES2 interface might look a bit intimidating if you never used it, but it's extremely powerful once you learn how to use it. 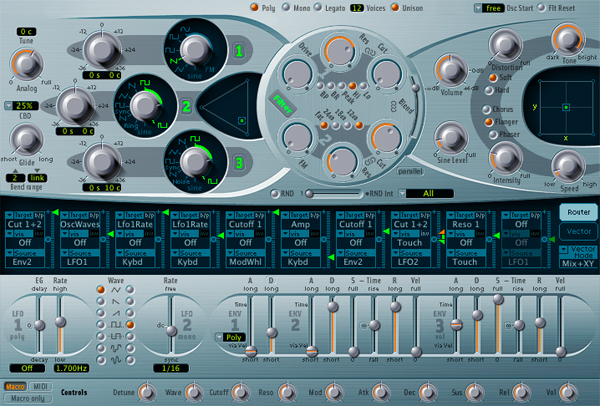 The default ES2 sound is a soft, morphing, heavily modulated sound. So it's better if we clean up this patch before we start so that we can hear how the tweaks we make affect the sound.

Let's start from the global parameters:

We also need to clean up the effects section; You'll need to:

Now turn off every module in the router. To do this, just click on "target" and select off.

We need to turn off the Vector as well.

Our goal is to create a simple, clean patch so let's bypass the filter (click on the green "Filter" button. It will become grey, and that means it's disabled).

Finally, let's move to the oscillator section, and:

Now we have a simple, clean patch and we can start designing our reese. If you find it useful, save this patch so you can quickly access it again whenever you want to start designing a sound from scratch.

First we're going to tune the third ADSR envelope, which always controls the amp. We're looking for a fully sustained sound, so set a very fast attack (15 ms), no decay, full sustain and no release. 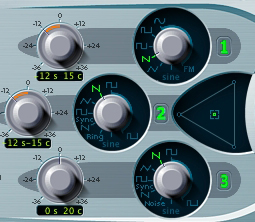 To add even more movement and depth to the sound we created, we're going to set the number of voices to 12 (just click, hold and drag) and turn unison on. This makes 12 slightly detuned voices play at the same time.

It's time to filter the sound. We're only going to use one filter, so move the blend fader all the way down (to 1), and then set:

Basically we just distorted the sound (that's what the "Drive" knob does) and then filtered out all the high range of the frequency spectrum.

Now we're going to use the second envelope to modulate the filter cutoff frequency and gradually reintroduce part of the frequencies we filtered out in the previous step.

To do so we need to use the router. You have 10 independent routing modules that allow you to select a source and a target of modulation (the optional "via" parameter offers a second source to modulate the intensity of modulation).

The small green triangle on the slider on the right of every routing module defines the amount of modulation we want to apply. In this case we don't want to reintroduce the highest frequencies, so we're going to set it to 0.54.

Now that the second envelope controls the filter cutoff frequency, it's time to tweak it. What I want to achieve is simply to introduce the high end of the spectrum gradually, so we're going to set the attack to 570 ms, no decay, full sustain and no release.

Now we want to add some more distortion. Leave it on "Soft", set the tone to 6600Hz and the distortion to 6 dB.

To add even more warmth to the sound we're going to turn the "Analog" knob to 0.480. This will create some random detuning (it emulates analog synthesizers).

We want some subtle extra movement in our sound, so we're going to turn the filter FM knob to 0.14. This modulates the filter's cutoff by the frequency of the first oscillator. Not every filter has this fuction, but you can achieve the same result by modulating the filter cutoff trough a LFO generating a sine wave.

Let's distort it even more. Add a "Distortion" insert, and set:

Now it's time to add some reverb. Add a "SilverVerb" insert, and set:

Here's our reese playing a simple line in a DnB track.

Now I'm going to explain you how to design a hoover sound. If you don't know what a hoover is, try to listen to one of the tracks that made it famous: Human Resource's "Dominator".

The so-called "hoover" is basically a big lead sound with a sudden rise and fall in pitch. In Logic's ES2 you could achieve this simply by assigning an envelope to control the pitch of the oscillators trough the router, but I'm going to show you how to do this in the EXS24 to introduce you to the technique of resampling, which is fundamental in sound designing.

Let's repeat Steps 1 and 2, but this time with a 4-bars long note which we're going to export that and then load it into a sampler. But this time create a C3 instead of a C2, since we're not looking for a low sound.

Starting from the clean patch, this is what you'll need to tweak:

Now you have to export the long C3 you just created and load it into a sampler. Doing this in Logic 9 is especially easy thanks to the new bounce in place function, that allows you to bounce several regions inside your project in one click. Just select the region, ctrl-click it and select "bounce in place".

Now select a name you like, set "New track" as destination, and leave "Bypass Effect Plug-ins" and "Add Effect Tail to File" unchecked, since we haven't inserted any effect. The three options next to "Source:" allow you to decide if the original region will be left untouched, muted or deleted.

Now select the new region (make sure you select only the region you want to sample, or every region you select is going to be assigned to an EXS24 zone), ctrl-click it and select "convert to new sampler track".

Make sure "Regions" is checked, select a name you like, and leave the trigger note range alone, since we're going to edit the zone manually.

A new ESX24 track will appear. Open the ESX24 editor and select "edit". Then select C3 as key (since we sampled a C3 we want C3 to be the root note) and make sure that the zone is extended to the whole keyboard by selecting C-2 and G8 as Lo and Hi in the Key Range column.

Now we need to do some minor tweaks. I'm not looking for dynamics in a hoover sound at this stage, so adjust the Level knob so that notes are always played at full velocity. Then add some release to the second envelope, and finally set the voicing to mono.

Finally we get to create the characteristic of the hoover: a sudden rise and fall in pitch. As you can see, the EXS24 router is identical to the ES2 one. The second routing module is already set to affect the Pitch: turn "via" off, change the source of modulation to "Env1" and set the intensity to +600 cents.

Now let's tune the envelope: set the Attack to 130 ms and the Decay just above that, around 160 ms. You can hear how this envelope modulates the pitch creating the infamous hoover sound.

Here's the hoover sound in action playing along with one of Logic's house beats.

Don't be surprised if the reese we created is not as nasty as Noisia's basses, and if the hoover doesn't sound like the Roland Alpha Juno 2 one. Unfortunately is not that easy.

Creating sounds that stand out in the crowd requires a lot of processing. Producers often resample sounds a huge number of times processing them in many different ways. Sounds that occupy a wide frequency range, like reeses, are often split into frequency bands that can then be processed separately.

Showing you how to split a reese into three frequency bands and how to resample them several times adding modulation and effects is beyond the scope of this very tutorial, which is intended to show you the basic techniques to create these kind of sounds from scratch and then leave the experimenting to you.

So, get your favourite synths, samplers and plug-ins and start experimenting! If you're a bit lost, here's some ideas on what to do after you sampled a sound: add different modulations to the filters using LFOs and envelopes, add EQs, flangers, phasers, guitar amps, distortion, saturation, compression and everything that comes to your mind. Sound designing is an art: there are no rules, and like everything else it requires time and experience to create those sounds that will set dance floors on fire!