Let’s say you’ve just finished a day of tracking and you have a whole bunch of takes for one vocal part thanks to Logic’s comping feature. But at the last minute it’s decided that two lines should be switched around for creative reasons, or a certain word should be sung closer to the beat. It would be a waste of time and money to go back to the tracking phase, but it’s going to be hard to choose the best comp without being able to preview the changes. How do you edit them all at once so you can judge each take? Logic Pro 9 allows you to do so.

Every few weeks, we revisit some of our reader's favorite posts from throughout the history of the site. This tutorial was first published in November of 2009.

Before we learn how to edit take folders, let’s look at recording those multiple takes in the first place in case you haven’t done so before.

Click and drag on the bar meter at the top of the Arrange window to set loop locators. When you press play, Logic will loop that section of the song repeatedly. Make sure you set locators for precisely the section you need to capture multiple takes for. Your bar meter will look something like this:

Hit the Record button. You’ll get your four beat count-in the first time, scurry over to your instrument or mic really quickly!

After the count-in, Logic will just keep playing back the same section and recording on new take tracks. You won’t get a count-in with every repetition; after the first play-through it loops seamlessly as you’d expect. Once you feel you’ve captured enough takes to make a good comp from, hit Stop.

Here’s the audio I’m working with — I’ve played a chord progression a bit behind the drum beat, which gives the progression a relaxed sort of feeling. I’ve done this specifically so I have something to edit into place later.

Once you’ve got a set of takes, the first thing you need to do is turn Quick Swipe Comping on that region off. This can be done by clicking the little button with three rectangles inside it in the top right corner of the region, or by selecting the menu option that will appear when you click the arrow button next to it. Here’s a screenshot that shows both: 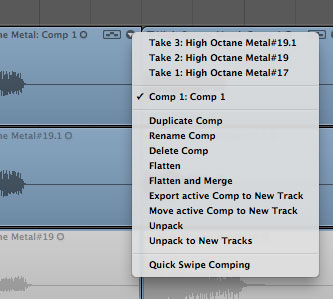 Double-click on the region or click the small arrow in the top left corner of the region to expand the take folder. You’ll see each of your takes each on their own tracks.

Select the tool you wish to use to edit the tracks. Not many of the tools will work at this stage, such as the fade tool, but for now all you really need are the scissor and pointer tools. Split the regions with the scissors where you plan to move the tracks.

Here’s what my tracks look like now — quite a bit of cutting going on: 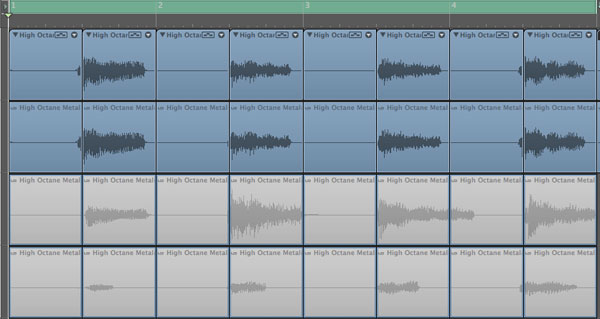 It’s important to note that splitting regions creates new regions — a fairly obvious point, but you will need to remember you’re also separating the comp groups. This makes it easy to swap one chord out for one from another take, but you can just switch the whole thing over to your fifth take or whatever without going through each region’s comp controls one by one.

At this stage, delete unneeded regions and shift them into place. I’ve decided that my guitar track feels too relaxed and I’m putting everything back on the accented beats where the average person would expect them to be.

Because of the simplicity of my edit I can remove the silent sections to create a cleaner track and simply move all the regions over half a bar: 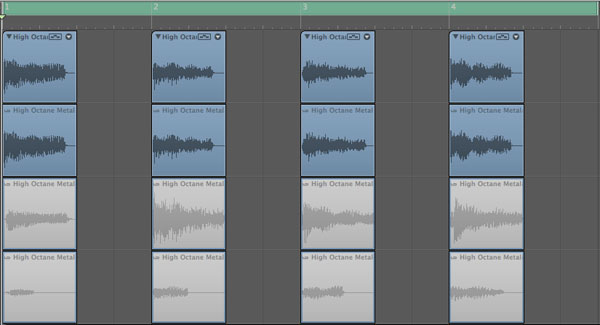 Comp the edited tracks. At its simplest, this is basically a matter of using the drop down menu to select the take you’d like to use in each of your segmented regions. For a more detailed look at comping, refer to this tutorial, but bear in mind that there may be some changes between Logic Pro 8 and 9 when following the instructions.

Move on to the next step once you’ve turned the best part of each take into one track and you’re happy with it.

Are you sure you’re happy with it? Because we’re about to flatten the takes down into your one comp, and once the Undo history runs out you won’t be able to change your mind easily.

Click on the arrow button in the top right corner of the window to bring up the comping dropdown, and select Flatten. Repeat this process for each region. 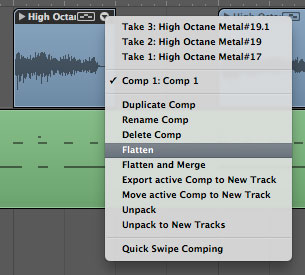 Now that the comp is flattened we can use our tools again, so I’m going to fade the regions in and out to take that sharp edge off them.

I had to fade in pretty heavily to make the chords smoother. If I was working on a proper project I would’ve edited much more carefully but since this is a tutorial I just made cuts right on the beat. So how far you need to fade will depend on the type of audio you’re working with (these are quite percussive chord hits so they come in loud and hard) and how well you’ve edited the regions.

(I am of course aware that the guitar is in desperate need of some reverb, but that’s for another tutorial!)

Merge the regions together if you’d like to have a solid block for that chord progression just like when we started. This is simply a matter of selecting all the regions you wish to include, then going to the Region > Merge menu and clicking on Regions.

And there you have it: one comped, flattened, edited and merged region.