How to Enhance a Live, Out-of-the-Mixer Concert Recording

I was playing at a concert recently where I had the fortune on getting my hands on a 2-track recording out of the FOH mixer. I playing at a festival and all the stages recorded the acts, giving them a CD at the end of their set. Usually, a recording such as this is done straight out of the L/R OUT of the mixer. All the channels of the mixer are fed to the stereo out that's fed into a stereo recorder. The recording is then burned onto a CD for the bands to listen to.

This is a great service since every band is interested in hearing how they sounded to the audience. The only drawback is that a 2-track, dry recording straight out of the mixer doesn't really sound that great.

However, there are some things you can do to make it sound better in your DAW. I think of it like a mastering session with a twist, because you're essentially mastering the 2-track recording but the trick is to use reverb to make it sound like you're in the audience.

Straight from the Board

Although this recording is only one guitar, voice and cajón, the same principles apply for any type of instrumentation. Listen to how dry and in your face everything sounds straight out of the board.

The levels are fine, but there's no depth so everything just comes right at you. Although we can't move individual instruments like if we were mixing, we can still do some work to make it sound better. The first thing that jumps out of me is the buildup of low-mid, lack of presence and highs in the voice (although it's loud enough it still doesn't cut through IMO) and that dreaded DI'd acoustic guitar sound. Although we can't do a lot to fix the guitar sound (I'll try!) we can do a lot to make the frequency response better.

Since this is a “mastering” session, we'll start with some linear-phase EQ. They don't introduce as much distortion into the sound so they're preferable when you're mastering.

As you can see in the screenshot below, it's all about subtle, broad boosts and cuts here and there.

Take a listen to how it's changed so far:

A definite improvement I believe. More presence and less muddiness.

I've recently started using multiband compression in all my mastering and this simple live recording is no exception. Since I'm essentially dividing the frequency spectrum into three separate compressors, they all act differently to each instrument. In this case, the middle band actually works to lower the levels of the vocals a little bit to keep it sounding less “glued on top.” I realize that I boosted the presence with the EQ in the last step but it all still has to sound good together.

That way, when the vocals get too loud they don't sound out of place. They still have a good presence too them without jumping out at you. 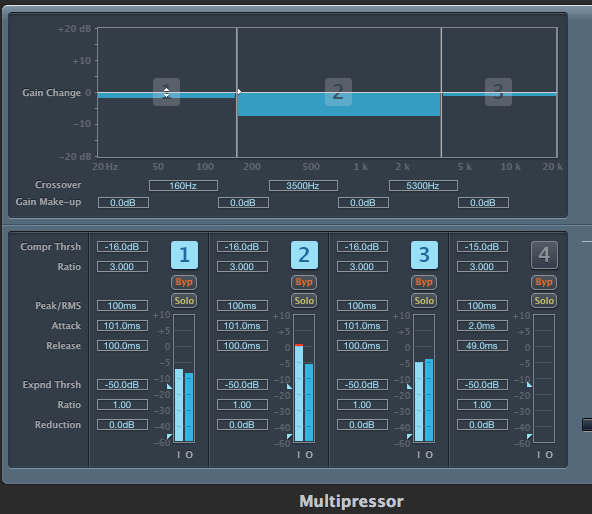 The screenshot above is taken at the end of the phrase, when the vocal gets louder than everything else.

Listen to what we've got so far:

Shaping up nicely, considering what we have to work with. But the raison d'etre is yet to come, and that's making the song sound like you're back in the venue. We'll do that with reverb.

In order to recreate the live feeling of the recording we're going to add some reverb via an aux track. The concert was in an old southwestern courtyard building that created some pretty amazing natural reverb while we were playing. Unfortunately that didn't translate to the 2-track so we'll have to recreate it ourselves.

Using the Space Designer in Logic I found an “outside amphitheater” preset that sounded pretty good. An outdoor reverb preset is definitely must to recreate this particular feel, but if you're working with a similar setting that was performed indoors I recommend finding a preset that emulates the room that you originally played in.

As usual when you're working with reverb sends, set it to 100% wet and control the level of the reverb with the aux fader. I usually just put the send pot to 0 dB (or all the way up) and manage the levels with the aux fader. There are some exceptions to this but it's an easy way to do it.

With the reverb on, it's starting to sound more like a live recording than a 2-track straight out of the board. The thing is, real live recordings usually have a few microphones in the audience to pick up the ambience. That's essentially what we're doing. It's just a quick and dirty, “cheating” way to do it when you have no other resources at your disposal.

Lastly, I added a limiter to the chain at -0.3 dB to keep it from clipping.

There you have it. I hope that gave you some ideas on how to make even the simplest of live recordings sound better. Like I said before, this is easily done with bigger bands as well. It might need more work in the EQ and compression stage but there's no reason you can't make it sound better with some processing inside your DAW.

The song is from The Long Wait, which I am in. You can hear more at YouTube or ReverbNation.

Let me know what you guys think in the comments.