How to Get The Most Out of Your Drum Loops

I'm really bad at creating beats. I prefer to use a real drummer, and when that isn't an option, I try to use loops. When I'm sketching ideas for a song, trying to create an arrangement and such, I like to throw a few loops into the DAW and play over that. I'm really bad at using a metronome or a click track so a drum loop is a much more comfortable option for me.

After I've recorded the rough chords and arrangement into my audio program I like spicing up the drum tracks a little bit. Logic Pro makes this easy for me as they have all sorts of different loops and corresponding fills I can use. I usually throw some loops together to create a somewhat fluid arrangement and then create from there. I don't really end up using those drum loops because I always want to record some actual drums instead, but during the creation process, using loops can really help.

But if you're stuck with only a few simple drum loops, what can you do to make the arrangement less repetitive?

The first step to spicing up your drum loops is to cut them open. How detailed you want to do this is up to you, but each beat is a good starting point. For example, in the extremely simple loop below, I've used Logic's scissor tool to cut each beat into a separate region. Any DAW has a scissor or a cut tool so this is easy enough to do.

Since I'm using Logic's loops, it's easy to cut in grid mode, but if you don't know the tempo of your loop and can't make it snap to the grid then you need to be more careful with your cuts. 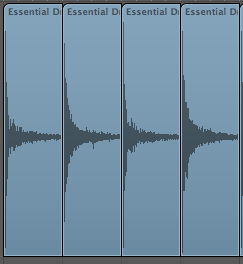 As you can see above, I've cut the loop up into its four corresponding beats.

As you can hear from the audio sample below, listening to this loop for a whole song will get really boring.

When you start cutting up loops like this, you'll want to keep track of which waveform is which. Labeling each hit makes it easier to move around, since you know exactly what you'll be grabbing and moving to another spot.

The simple loop we're using is pretty straightforward, since it's only kick and snare, but let's label it anyway. I'm using Logic's text tool to individually name each region, and as always, use a similar tool in your DAW.

The first thing you can do is simply add some extra hits to your loop. I've doubled the loop by duplicating it to the next four bars. Just so that we add a little variety I've copied an extra kick before the end of the first loop, creating a grace hit.

Listen to it below:

Not super exciting, but creates a little variation.

Let's keep re-arranging our kicks and snares to kind of close it up. I've basically added a few kicks on the last bars for variation. 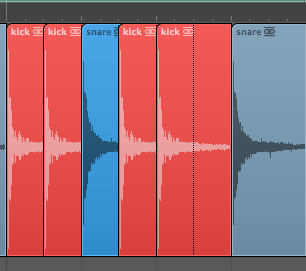 By now we've tripled the length of our kick and snare loop and given it enough variation so that it doesn't bore us to death.

If you have an extra cymbal crash handy you can create a new channel and add it to the end of the loop. Crashes and cymbals are really good at creating variation, and by just adding a few here and there you create a completely different loop. 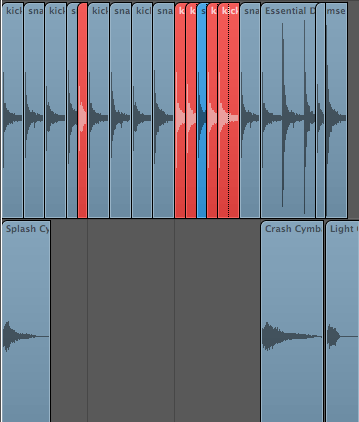 If you have a slightly more complex drum loop, you can create simple fills to end the phrase. The following drum loop has a little more going for it, but it's still simple enough to easily edit.

As you can see, I've already cut up the loop, labeled it and spliced it together in a different way. The first four bars (and the first five regions) have the original loop that you can hear below.

I want to create a fill with by using the double-kick part of the loop as well as the snare, so I've spliced them together to create this fill:

Nothing spectacular, but definitely usable as a fill.

To take it a step further, I've added some crash cymbals to really accent that fill.

These simple steps can take a boring drum loop and make something a little more bearable to listen to. By adding extra kick or snare hits you can variate your loops to avoid the repetitious and monotonous sound a simple four bar loop makes. Variating the fills and beats every other bars is sometimes enough, especially if the song you are creating isn't heavy on the drums and only needs a simple beat.

Hacking up drum loops like this won't replace a drummer, but if you only need to flesh an idea out it can come in handy. You'll avoid the boring sound of a simple drum loop repeating over and over again, and you won't have to deal with trying to create a beat in a sequencer or recording a real drum kit. Don't just follow these steps, try to make your own little fills and recycle your old loops to keep your production interesting.