How to Group Tracks in Pro Tools 8

Dealing with sessions that are fairly track-heavy can be a difficult process — even a song with as few as ten tracks gets a little tough to manage. Grouping is a feature of Pro Tools 8 that makes it easier to deal with sections of your project in bulk, saving you time and yielding more accurate results.

There are numerous situations in which groups become useful. You might simply want to mute or solo a particular group of instruments — even if you’re using sub-mixes, you might want to work with small groups within the sub-mix (such as instantly muting all your overheads, room mics and ambience mics so you can check on the close-miced drums).

Perhaps you’ve got a perfect relative mix that you don’t want to disturb — for instance, the relative mix between a set of guitars — but you want to bring the whole group down in volume so you have more headroom in your master fader or sub-mix. There’s only one good way to do it quickly and without throwing your mix out at all.

As you learn about the Pro Tools grouping feature, I’m sure many more scenarios will present themselves to you.

With the Pro Tools window layouts as they are by default, you’ll see the Groups list in the lower left-hand corner of both the Edit window and the Mix window. The groups are listed in the main area of the window, and a small downward-pointing arrow in the upper right corner of the Groups list provides you with a menu of options. This menu allows you to create groups, modify them, and do a variety of other things.

On the left-hand side of the Groups list, where the scrollbar will be if you create enough groups to bring one into play, there’s a button with the letters A and Z in it which determines how groups are sorted — alphabetically or in the order they were created. 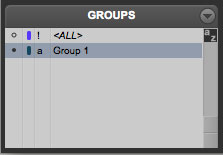 While the Groups list looks the same in the Edit and Mix window, each one is different in that there are three types of groups — Mix, Edit and Mix/Edit — and they only display those groups that are classified as a type relevant to the window you are in.

Which pretty much means anything you’d normally do in the Edit window.

Mix groups are significantly limited in Pro Tools LE when compared to Pro Tools HD — I’m not sure why you need to pay tens of thousands of dollars just to affect something as simple as input monitoring or plug-in bypass — but as most readers will be on LE systems, I’ll list only those variables LE Mix groups can affect:

The last four are options you can select when you create the group, whereas the first two are inherent.

To create a group, hit Cmd+G (Mac) or Ctrl+G (Win), or bring up the Groups list drop-down menu and click on New Group. The Create Group dialogue box will appear. 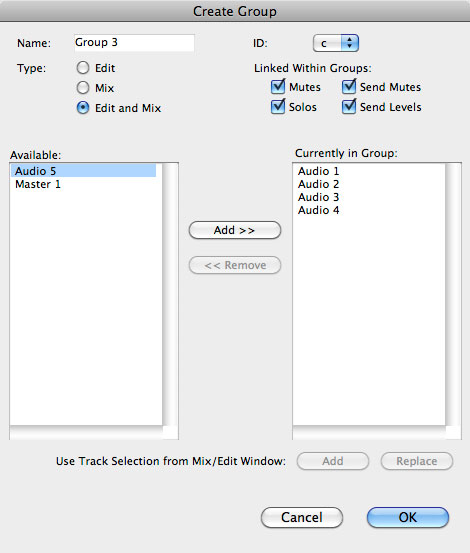 It’s wise to name it something other than “Group 1” — something that tells you what the group is for immediately. Get in this habit from the start as you’ll be creating plenty of groups once you realize their usefulness.

The next option to set is the group type, as discussed in the previous section. Most of the time you’ll just set up an Edit and Mix group.

Under Linked Within Groups, there are a bunch of checkboxes — Mutes, Solos, Send Mutes, Send Levels. If you tick these, the group will affect those variables. If you don’t, when you try to solo the group, only the track you’re clicking on will solo. If you want an all-round group tick them all — if the group has a more specific purpose only choose what you need.

The most important part of the dialogue box takes up the most space. The “Available:” list shows you all the tracks in your project that aren’t currently assigned to the group, while the “Currently in Group:” list shows you those that are. The arrow buttons between these lists allows you to move tracks from one side to another.

You can do things a bit more quickly by selecting the tracks you wish to group in the Edit or Arrange window first, then pressing Cmd/Ctrl+G to create the new group. Once you’re in the Create Group window, press the “Add” button at the bottom of the window to add all tracks you have selected in the Mix or Edit windows to the group.

There are a few basic tasks you’ll probably need to carry out on a regular basis:

You may need to modify a group, whether that’s to correct a mistake or simply to change the function of a group once it has served its purpose. To do so, simply right click on the group in the Groups list and press Modify. This will bring up the Modify Groups window, which is identical to the Create Group window.

As with modifying and deleting a group, simply right click on the group in question in the Groups list (or alternatively, select a group of groups and right click if you wish to delete more than one) and click on Delete.

The only thing left to do is learn how to enable and disable groups. It’s incredibly frustrating at first — if you’re anything like I was when somebody first showed me groups, I’d forget I had a group enabled and go to change a single track’s level, and twenty track’s levels would change!

To enable or disable a group all you have to do is click on it in the Groups list. If it has a blue-grey background, it’s enabled. If the group is not highlighted by any background other than the light-grey of the Groups list itself, it is disabled.