How to Host Video on a Second Computer

Whether you're a full-time film composer or you simply write music to the occasional video for fun, using a second computer to host the video can save you time and make the process more enjoyable. This tutorial will show you how to simultaneously run two Macs with one controlling the playback of the other.

Why Would You Want To Do This?

There are a number of good reasons to use a second machine as a video host:

What Are MTC and MMC?

To keep both computers in sync with each other we'll be using MTC and MMC. MTC stands for MIDI Timecode and allows us to send timecode information via a MIDI connection. In this tutorial the "master" computer will be your main writing machine, and the "slave" will be the secondary computer running video. When you hit play, the master computer sends the running timecode information to the slave computer over MIDI, which tells it where to play back from.

MMC stands for MIDI Machine Control and is a set of commands for controlling playback. MMC is important for when you're not in play mode but you're moving the cursor to a new place in the sequence timeline. While MTC requires the master to be in play mode, MMC will send an immediate message regardless of play mode and the slave will line the picture up to match your location.

Basic Considerations for Your 1st Machine

When deciding which computer to make your master, you should generally always go with the faster and more powerful machine. The more RAM and processing power the better, because although running video can take a lot of system resources, the primary reason for all this is still to write music and that's what we need to make sure we can do as well as possible.

You'll also need to be using a program that can send MTC and MMC information. Most of the leading DAWs have this capability. For this tutorial I am using Logic, but the principles are basic and should work universally.

Lastly you'll need some way to receive audio input from the video machine. Otherwise you wont be able to hear what's on the video! Just about any audio interface with a stereo input should be fine. Because I only need to hear the video audio for reference, pristine quality is hardly a concern. I use the headphone jack out of the video computer, split into stereo quarter inch inputs on a MOTU 828 mkii.

Basic Considerations for Your 2nd Machine

Although your second computer should be the weaker of the two, it doesn't mean you can use any old paperweight for the job. Generally I've found that Mac Minis are great for this purpose, as they are fast enough to bear the load of running video but they are also pretty cheap. You can usually find one on Craigslist for only a few hundred bucks.

You need to make sure that whatever you're using, it has some sort of audio output. As I mentioned earlier, it can be as basic as a headphone jack.

You'll also need to have some sort of network connection, because in this tutorial we'll be sending the MTC and MMC information over network. I've found that a wireless connection is reliable and fast enough, though you could also use Ethernet cables and an Ethernet port just to be sure.

Set Up the 2nd Machine's Monitor

When deciding on where you're going to place the monitor you should take a few minutes to consider how you typically work. Although there might be a nice big open space on the left side of your desk, if your MIDI keyboard is over to the right you could find yourself with a very sore neck before too long. Try to place the monitor somewhere that is not distracting but also does not require very much effort to look at. I have the video monitor mounted to the wall just above my main monitors, which has worked out very well. 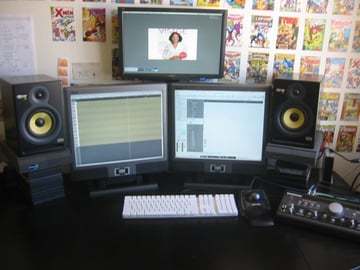 If you ever have clients over to your studio or showcase your work for others, you also need to consider how they're going to be able to see the video. Sit or stand where they typically would and make sure that the monitor is in a favorable position for making your work look its best.

Using two different computers at the same time can become a cluttered and confused mess once you start adding keyboards and mice to your desk space. The best solution is to find some way to use the same keyboard and mouse for both computers. There are hundreds of KVM switches available which let you hit a button and switch control to the other computer.

An amazing piece of software called SynergyKM lets you use the same keyboard and mouse over multiple computers and simply switches control via a network connection. When you move the mouse to the side of the screen you'll switch to the other computer, as if it was simply a dual display. This is the most efficient method I've found.

The idea here is to make it as easy to possible to use both computers. If it is in any way a hassle you'll become frustrated every time you want to control a different computer.

Similarly, you'll want to make it as easy as possible to control the volume of the video's audio. Again consider how you typically work and what it is you'll need to control. I'm routing the audio into Logic using the 828 (which allows me to control the volume, and also record any dialogue or effects if I need to for some reason) and then back out again to a Mackie Big Knob. The Big Knob lets me turn dialogue or temp music on or off at the press of a button.

You could use MIDI cables and a MIDI interface for MTC, but I suggest you save yourself the clutter and use your network instead. There are commercial products such as MIDI Over LAN available, but Mac OS X actually comes with MIDI Over Network software built in.

Inside the Utilities folder of your Applications you'll find Audio MIDI Setup. Open the application and choose the MIDI devices tab. Double click on Network and we'll set up a session.

First you'll need to create a session under "My Sessions" by clicking the + button. Name it what you like, usually something short and sweet is best like "Master Video". Now switch over to your 2nd computer and do the same thing but call it by a unique name. You should now see the other computer's session show up in the Directory. On either computer, choose the session to connect to, click Connect, and you should be all set. We'll test it out soon.

Set Up Your 1st Computer as the Master

To set up the main computer, we need to set it to output MTC and MMC. Under Project Settings choose Synchronization. Next choose the MIDI tab. You can uncheck "Transmit MIDI clock" if it's checked, as we wont be using it. Next check "Transmit MTC" and choose the network session that you created in the previous step. Finally check "Transmit MMC" and uncheck "Listen to MMC input". Pretty simple, right? All we're doing here is telling Logic to send MTC and MMC information via the MIDI network session you've selected. 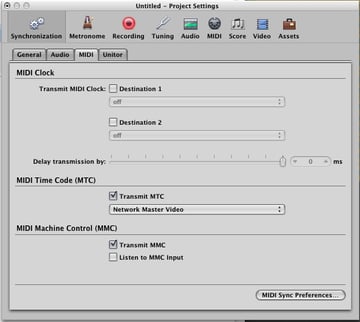 Lastly check the framerate of the video you are trying to run. You can set this on the General tab in the Synchronization preferences. If you don't know it you should ask whoever gave you the file, but you can also usually check the Movie Inspector in Quicktime.

Set Up Your 2nd Computer as the Slave

For the 2nd computer we'll also be editing the Synchronization preferences, but this time we'll be choosing opposite preferences. Under the General tab, set the Sync mode to MTC and check the "Auto enable external sync box". Under Frame Rate choose "Auto detect format of MTC", which will keep you from having to change the framerate on both computers. Next go back to the MIDI tab and uncheck everything except Listen to MMC Input. 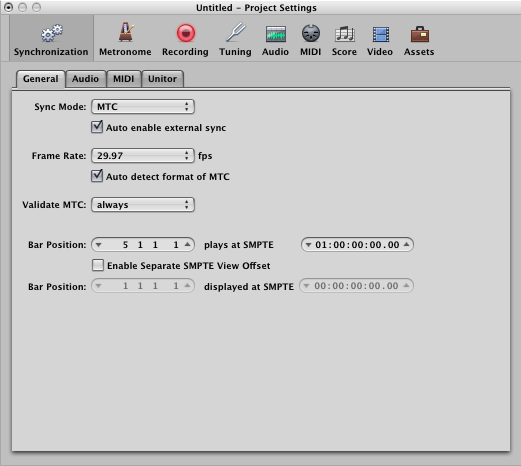 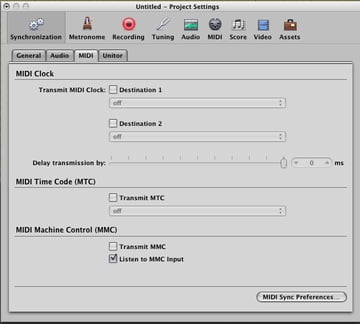 Test It All Out!

Now there's nothing left to do but try it all out. Load up a video on the slave computer and then hit play on the master. Make sure you are controlling the video but also that your audio is working as well. If you're running into problems, there are a few things you can check. Do you have the right framerate? Did you check the right boxes on each computer or get them mixed up? Are your computers connected over the internet? Are you sending MTC out of the correct session?

Leave a comment discussing your success or any questions you run into.