How to Make an Insane 'Plucky' Trance Lead

The lead sound is the key to any track: pick a clichéd or dull-sounding lead and you'll multiply the amount of work you need to do in order to create a memorable record. Obviously, your own creativity is vital when creating an original lead, but it certainly pays to know the territory before you embark....

In this tutorial, I'll take a look at short, sharp lead sounds. Here's a great one from an existing track...

'Shadow Hearts' is a great modern trance record; one reason for this is the way that the regular rhythm of the main melody sits neatly over the chord progression. The tone Leinonen chooses, in contrast to many classic trance leads, is a thin sound with short amplitude and filter cutoff decay times. Without going into too much depth, it sounds like this could have been created using primarily sawtooths, and then some detuning or unison-type effects to create the “woody”, marimba-like quality.

Listen carefully to the delay effect on this sound as well: you'll notice that the delay time is short, creating a “spring-like” effect, but also that the delays don't quite coincide with the played notes. This creates that great “scrunchy” texture in the build sections as the lead sound filters up, and also adds a fantastic level of complexity to a deceptively simple sound.

With apologies to Mikka, I had a brief go at recreating this tone using Novation's venerable V-Station... 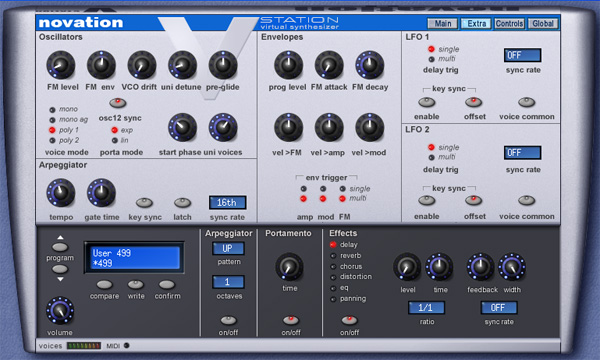 ...and here's my unison settings.

Listen to the result:

The outcome of my experiment was, to put it mildly, comically poor, and if Mr. Leinonen ever visits the site and pops up in the comments thread, I'll be sure to hide my face in shame!

The process was interesting in bringing home the importance of using techniques like unison and detuning on even very short simple sounds to fill them out. I'd recommend copying a lead sound from a track you like for the purposes of study, but certainly not to rip it off in your own productions.

Real Plucks: The Inside Story

Obviously, building a tone from scratch is only one way of creating a lead: if you're after a very rich, detailed lead you may be better off building from a real instrument sample, and that's what I did in my track 'Imaginary Cities'.

Listen to the clip:

Here's the lead sound on its own:

To get this sound, I used a koto sample from the absolutely amazing Quantum Leap RA. Because some of the koto patches were far too complex for the track, I just chose a single voice (“koto non vib”).

I could have used a piano or a much more generic tone for this melody, as long as I kept it short and sweet. However, the koto was really outstanding and ended my extremely long search for a distinctive lead!

I decided not to layer this sound to keep as many of its original characteristics as possible, and sent it to this basic ping-pong delay.

Then I added this shortish reverb:

Finally, I sent it to a bus with the lovely free G-Rev delay and a big silly ping-pong on it.

In addition to all these effects, I sampled the riff and added a couple more reversed sections, just to add some specific “echoes” where I wanted them.

RA has a lot of interesting instrument samples which could find their way into various styles of music: combining this kind of tone with an interesting synth part is one idea I'm keen to try.

Originality with this kind of sound is very tough: you can hear some really great but utterly overused plucked leads on ROMplers like reFX Nexus. It is tempting to use some of the old classics every now and again, and there's nothing wrong with that, but there will be short, sharp leads out there that nobody has come up with yet...

You can hear a longer clip of Imaginary Cities at NervousTestpilot.co.uk.

Paul Taylor
Paul Taylor is a writer, musician and game developer from Oxford, UK. He writes regularly for Computer Music magazine, and has released tracks as nervous_testpilot on London's Nu Energy record label among others. He's currently working on a new game soundtrack for Mode 7 Games (http://www.mode7games.com), as well as on improving his engineering and production abilities.
Weekly email summary