How to Make an Unique Kick from Samples in Ableton

This tutorial is for producers who don't have drums kits or drum machines. Using kicks from sample libraries is good choice for production, but many producers including me think that using other people's samples doesn't sound unique enough. If you want to make unique kicks you have to do it on your own.

You don't have to buy an expensive drum machine or real drum kits. You do have to buy or download some excellent drum libraries, and use them to create some fantastic and awesome kicks which will be the foundation of your song.

Why is this so important? Listen some dance record from the top artist like Armin Van Buuren, Garreth Emery, Ferry Corsten and you will realize that the kick is the most important element of their song. How we shape the sound of a kick is one of the most creative decisions we have to make—we control aspects like how solid, how punchy, how thick and how snappy. If your kicks lack energy, or are too soft, they won't bring satisfaction on the dance floor.

For best results, use the Playpack (download source files above) to follow this tutorial step by step in Ableton Live.

The Basic Idea of the Technique

The technique which I want to show you is kick layering. The basic idea is that you layer different kick samples and mix them. The result is a completely new kick.

But before we start. I highly suggest that you train your ears. Listen to quality music. What you listen to and what you hear determine your taste and perception about how a sound should be presented. It is the art of listening. If you are not listening to quality music and only just random badly produced "trash" tracks (which believe it or not are very often played on radio) you have no chance of making good tracks and good kicks. Attuning your ears and mindset to the right frequencies is crucial to a good mix.

Step 1: Setting Up the Devices and Channels

We need to have the right stuff on each channel—if you put the wrong effects to the channels you won't be able to mix them together. So we need a Simpler, an EQ Eight, a compressor and a spectrum. With the spectrum you can analyze the fundamental harmonics of the kick and make experiments of the kicks frequency ranges on the fly. You can try different effects, but these give you enough to build your own kicks.

The most valuable device for this tut is Ableton's excellent sample device, the Simpler. The Simpler is an instrument that integrates the basic elements of a sampler with a set of classic synthesizer parameters.

Step 2: Setting Up the Channels

I have already set up three channels because we will use three individual kick samples. The most suitable samples for this simple technique are probably from the club and house libraries. I'm layering them on top of each other, and will eventually bounce to them a new audio channel. I will use three kicks and three separate frequency ranges: the midlow, the sub and the high (I call it attack). And last but not least I group them together.

Don't forget to create a MIDI clip for each channel. Use a standard one-bar looped 4/4 pattern, one grid, and place a kick every 1/4 on C3. Keep in mind that our sample needs to be on C3, or at least needs to be transposed suitably if the original tonality is different. Set the overall tempo to around 135 bpm.

Step 3: The Transient of the Kick

I have chosen from different genre libraries because my goal was make a very special kick. The first one comes from a Clubhouse kick because it has a high noisy attack so its bite creates attention in my track. I heard many productions with kicks which lack transients so the audience can't feel enough rhythm to rush to the dance floor.

So it is very important to search your libraries and find a kick which has got strong attack. Once you find one, take it to the Simpler. This is our first element, but we don't need all of the kick so use the the length knob and turn around 35.7%.

Listen again! Did you noticed that the sub frequencies have gone? That was our aim. I used to turn the knob around 7-8% so I only keep the transient of kick. But it wasn't a good idea because later on I can't mix the two or three kicks together because the first kick was too short to connect to the other ones.

I feel that transient hasn't got enough energy and bite. By emphasizing harmonics we increase the definition of sounds. Lower harmonics are louder than higher harmonics. For example, the second harmonic is louder than the twentieth harmonic. So a compressor is needed to emphasize the transient. I create a compressor preset from scratch which looks like the following:

Bear in mind that increasing the attack of the compressor emphasizes the high frequencies of the transient, and lowering the release time increase the quiet frequencies. I added an EQ Eight equalizer in order to fix the frequency crashes with the other two kick samples.

The next bass drum is from the same library. This will give some sub and low mid range so our kick will have enough energy to pump in the clubs. This time I don't need the first milliseconds of the transient because the previous kick has do the the job so I turn the start knob to 15.9%. I lower the volume with -7.65 to match the overall volume the two kicks. You can do the same with the mixer track volume slider too.

Play the same MIDI clip together with first kick and you will hear something is not going well. Yes you are right—the two kicks are out of tune. A quick tip is that if something sounds wrong always check first that the two kicks are in tune. I decide that the transient is almost one semitone higher, so I lower one and I make some fine tuning with the detune knob.

Now listen again. It's much better, but it isn't perfect. I use the Simpler lowpass filter 12 to remove the remaining high frequency. It has to be done because the high frequencies will threaten the first kick transient. Next I add another compressor to this channel because I feel that it has too much peak in the lower mid range. 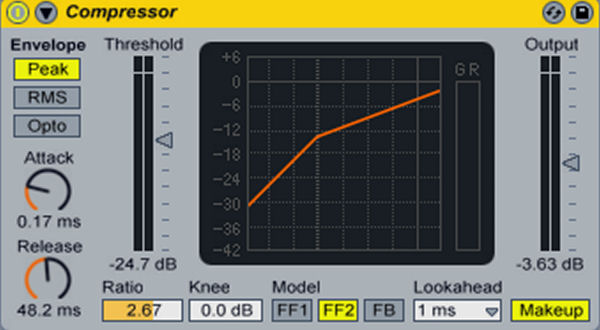 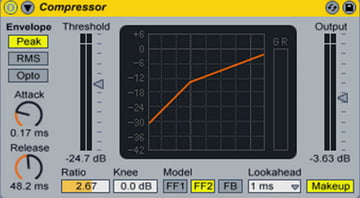 Now it has much bigger impact. The lower range is much stronger. Meanwhile I lower around 622 Hz at the transient kick so it isn't too boomy.

The last kick is responsible for the earthquake heartshake sub frequencies. This kick from a trance library. I searched for a kick that has very prominent sub tail—the tail of the sound will be our main source. I took it to the last channel. I set the start knob around 10% and apply a lowpass 24 filter and filter out the high frequencies. After that I use the filter resonant knob to push the low frequencies a little bit harder.

So we have all of the kicks together. Let's do some final adjustments. I added a compressor, an equalizer, and finally a maximizer plugin to my group channel.

Kicks have two primary spectral components—the impact and the attack. These two components closely resolve to the lows and high mids respectively. Within these two ranges, different frequencies have a different effect. For example, 60 Hz might produce more oomph, while 90 Hz more thud. Dance and hip-hop might benefit from robust oomph, while rock and pop might benefit from a solid thud.

On the high mids, the higher the frequency the more the click. A healthy boost around 8 kHz can produce the typewriter click that many associate with heavy metal. The low mids of the kick have little offering, and attenuating them can clear resourceful space for the low-order harmonics of other instruments. On the highs, kicks have very little valuable energy, which is sometimes entangled with hiss. Often rolling off the highs from a kick would go unnoticed.

According these principles I used a compressor to get slightly louder and stronger kick without making the high frequency of the transient louder. So I turn the release knob over 250 ms. I raise the output knob about 22 dB because of the heavy compression. I hardly use the auto makeup because it not precise it is too loud and sometimes is too quiet. I suggest you use the output knob without the auto makeup gain. Now our kick is much stronger.

I lower the sub kick volume about 5 dB because I feel it was bit much.

Finally I put an L1+ Ultramaximizer from Waves to compress the kick drum a bit more, which prevents extreme peaks during the kick fills. The settings (Threshold -3.0 Out of Ceiling -1 dB) create a consistent kick amplitude without overly constricting the dynamics. You can use any kind of maximizer plugin. 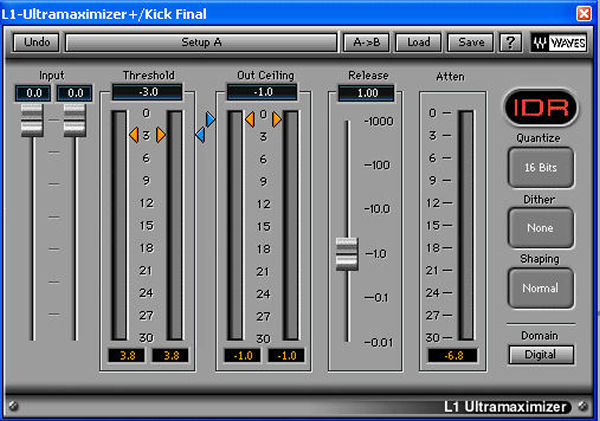 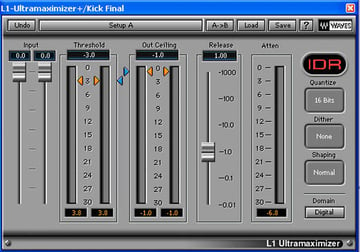 So we have finished the job. Now we only need to bounce and free up some CPU power. I create an audio channel and in the I-O section I set the audio to this new channel name Kick Final. I set the monitor in on the kick final channel. Hit the record button and and you have the kick sample. Just crop it into one bar of 4/4 or whatever you want, and use it on your productions.

Or you can freeze the group channel (right click on the Channel's name, then select "Freeze"), automatically turning the MIDI clip into an audio clip. (Don't worry, you can "Unfreeze" the track if you like.) Hold Ctrl and drag and drop the clip into a new audio channel. So listen our final kick sample. 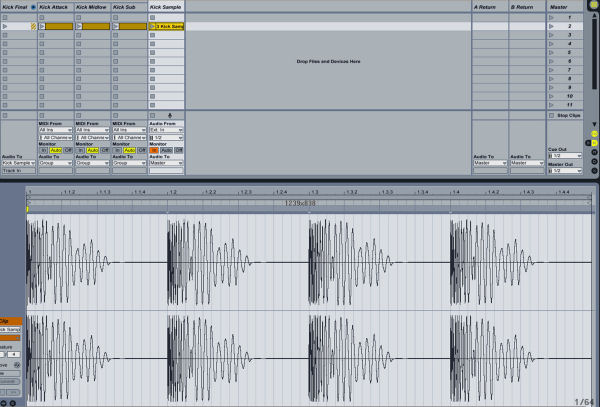 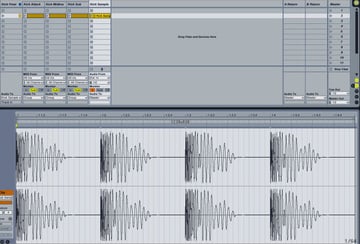 This technique works quite well for me. I hope you find it useful and helpful. I've included an Ableton Playpack with the MIDI file inside. Thanks for reading, and happy music making!