How to Make Arpeggiated Lead Sounds in Logic

The use of arpeggiators in modern electronic music is as popular as ever. Hardware synthesizers such as the Access Virus, Nord Lead, Waldorf Q, and Novation Nova have long been popular in electronic music for their unique sound, extensive programming matrices and step-sequencing and arpeggiation functionality. While several third-party soft-synths have robust arpeggiation and step-sequencing functionality, none of the synthesizers in Logic Studio have this feature.

Every few weeks, we revisit some of our reader's favorite posts from throughout the history of the site. This tutorial was first published in March of 2009.

However, with a little dive into Logic's environment and Piano Roll editors, you can make sophisticated, arpeggiated lead lines (hereafter: arp line) just like the pros.

At the heart of any arp line is a great synth patch. Logic hosts a number of synths that would make excellent sources, but we'll use the oft-overlooked, yet powerful ES1 synthesizer for its punchiness and simplicity.

Load one instance of the ES1 synthesizer in a new instrument track in Logic Pro. From the drop-down menu of presets, select 06 Sequence Elements - Saw Sequence. Set the octave to 8, select Wave 2 for the Sub-Osc waveform, and add a slight amount of Glide to the patch. Your final patch will look something like this: 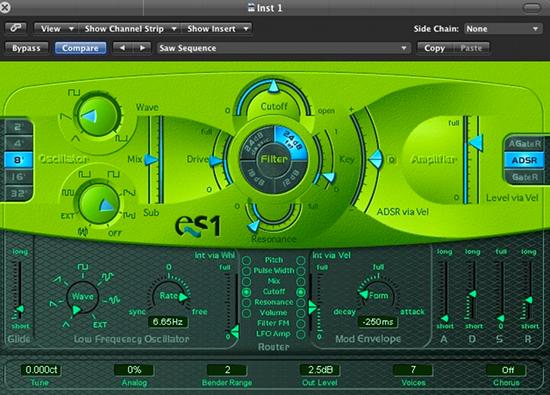 Now that we have a sound, we can hop into the dreaded Environment window. The Logic Environment is feared by many, but the truth is that once you have a basic understanding of it, you can accomplish some powerful things.

Open the Environment window by pressing Command + 8. In the upper left corner, click the down arrow to expand the drop-down menu of Environment layers. Select Clicks & Ports. You should see a set of connections similar to those in the image below. 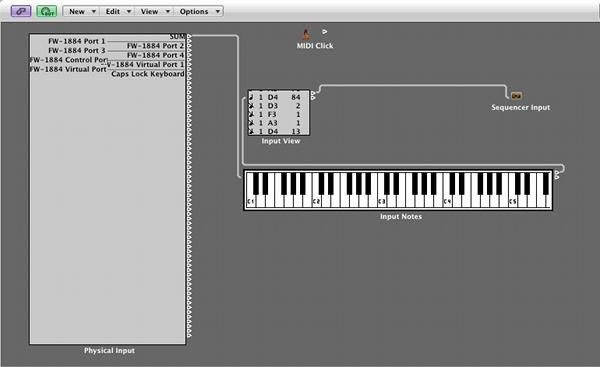 This window essentially shows the MIDI I/O of your keyboard controller or interface. You'll notice that at the end of the chain is the 'Sequencer Input'. This is the last item in the line where Logic receives and routes MIDI input to your tracks.

While there are several ways of connecting an Arpeggiator Object, I've found this method to be quick, reliable, and relatively straightforward. It has the additional benefit of allowing you to record the arpeggiated MIDI signal, which helps if you wish to edit the notes later on.

Have some fun experimenting with the effects of each parameter. For this tutorial, I'm going to use the following settings: 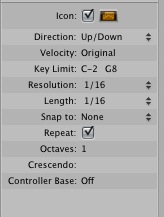 Now that we have our basic setup, we'll begin recording a few arp lines! Select a tempo that's appropriate for your tune - I'm going with 110bpm here.

By putting your transport into PLAY or RECORD mode, your incoming MIDI data will now be modulated by the Arpeggiator object. Experiment with this for awhile to get a feel for how it works, then record a few variations using simple chords and intervals. You'll find that while using this Arpeggiator is an imperfect art (occasional missed notes and late changes), a few short moments in the piano editor to move a few things around will help clean things up to perfect sync.

Now that we have a few variations of our arpeggios, let's liven them up a bit using a couple of simple techniques. First, we'll add in some variations to the arpeggios in the Piano Roll editor.

For the first arpeggio, I have a simple alternating octave of 16th notes. I'll select all the notes in this section and use the Transform - Fixed Note Length function. This will shorten the duration of the notes and give them a bit more punch. I set mine to 120 ticks.

Next, I'll add in a few third and fourth octave variations to some of the notes, resulting in something like this. 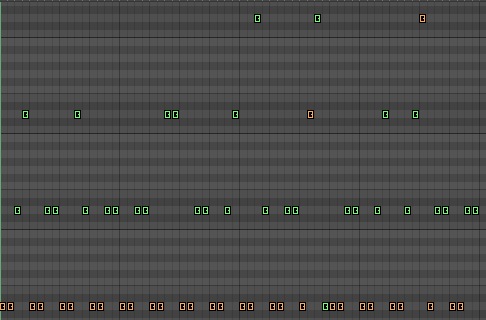 I'll use a similar process on the second arpeggiated section, adding in some octave variations and adjusting the note duration.

For a closer look at creating cool ostinato effects, check out this tutorial by Ryan Leach.

Adding more detail to the arpeggios

Now that we've tuned our arp lines, we'll add some simple effects to them using Logic's delay plugins. For this particular style, I really like Logic's Tape Delay, so we'll insert one instance of the Tape Delay plugin into the insert track of the Arpeggio arrange track.

We don't want the delay to overpower the punchiness of the arp line, so here are the parameters I've used for this plugin. 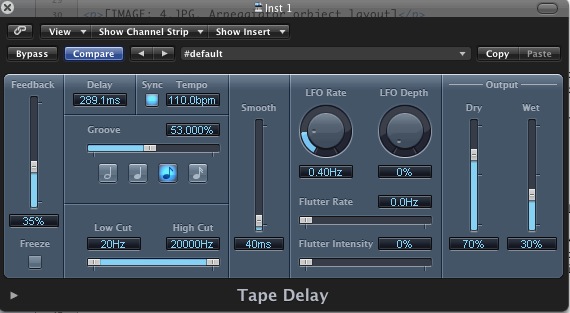 Here's the final result of our arpeggios using Logic's ES1, Tape Delay, and the Arpeggiator Object from the Environment window.

And for good measure, here's the whole lot, blended together with a nice dance beat. Enjoy!