How to Mic Any Instrument

Mark Garrison Dec 11, 2009
Read Time: 5 mins
Audio Production
This post is part of a series called How to Choose and Use Microphones.
The Beginner’s Guide to Microphones
Making Your Microphone Placement Work

Have you ever been confronted by an instrument you've never recorded before and thought, "How the heck am I going to mic that thing?" Well, before you lose credibility by getting caught Googling "How to mic a dulcigurdy," here are some techniques that will give you a place to start.

A Note About Mic Placement

The techniques below are quick-starts: they are meant as ways to start the process of choosing a mic placement. The way to get a great sound is to take your time and experiment with different mics and mic placements. This is arguably the most important part of the recording process because it affects all other stages of the recording, so it is well worth taking the time necessary to find the perfect placement.

There are four main variables that affect the sound you get from a mic placement. These are the mic you use, where you place it, the room you are in, and the position of the mic and the instrument within the room. I encourage you to experiment with all these variables to find the right mic placement for your situation.

This is an easy, one-size-fits-all kind of mic placement that's based on a simple rule of proportion. To use this technique figure out how wide or tall the instrument is and place a cardioid microphone that same distance away. For example, if you are recording a hammer dulcimer that is 3" wide, the mic should be placed 3" away from it. Most if the time this technique will yield a perfectly usable sound.

If you have the luxury of recording in a room with pleasant acoustics, then this technique is an option. It's not terribly versatile, but it can be effective. For this technique you will need one or two boundary mics (also called PZMs - Pressure Zone Microphones). The way a boundary mic works is that you place it on a flat surface, and it picks up in a hemispherical pattern - basically everything on the one side of that surface. Hanging the mic on the wall will pick up a fairly even sound of everything that is happening in your room. If you are using two mics make sure to follow the 3:1 Rule (the mics should be 3x as far apart as they are from the instrument - eg. if they are 1" from the instrument, they should be 3" apart) to help avoid issues with phase cancellation.

This one takes a little more time and effort than the others, but it is worth it because it also tends to yield the best results. What this involves is taking the time to understand how sound and tone are being produced by the instrument. For example, many people's first instinct when miking an acoustic guitar is to out a mic at the sound hole. While it is true that this is where most of the volume is coming from, the tone of the instrument is coming from other places.

When we strike the string of the acoustic guitar, sound is created by the vibrating string. This sound is transmitted into the instrument in two places: the nut and the bridge, so miking at the nut or the bridge can provide interesting results. The half-way point between the two (the 12th fret) is another interesting place to mic, as we begin to see harmonics forming there.

The sound from that vibrating string is transmitted through the bridge into the top of the guitar which itself vibrates, creating much of the tone of the instrument. On the underside of the guitar's top are a series of braces which form any of a number of different patterns. This means that different parts of the top will sound different, so when miking the top of a guitar, small changes in placement can make a big difference.

This same technique can be used for any instrument. In some cases it may take a bit of research, but the results are well worth it. The good new is that most musicians (particularly those that play obscure instruments) enjoy talking about their instrument, so often the extent of your investigation can be simply asking. 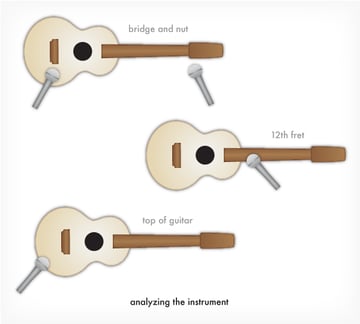 There is no right or wrong way to mic any instrument. Often the best sounds, and certainly the most unique ones, come from taking the time to experiment with different placements, mics, and rooms. It may seem tedious at times, but if you embrace it this can be the most creative part of the recording process. Have a little fun with it.

Mark Garrison
Mark Garrison is a recording engineer and multi-instrumentalist from British Columbia, Canada. For the past decade he has taught recording through classes, workshops, and writing. He focuses on teaching how to create better recordings through a greater understanding of the tools and techniques of the studio. He is also the author of The Encyclopedia of Home Recording.
Scroll to top
Looking for something to help kick start your next project?
Envato Market has a range of items for sale to help get you started.