How To Mix a Loud Hip Hop Kick Which Survives Mastering

Since Dr. Dre's "2001", one of the most common subjects upcoming hip hop producers discuss is those loud kick drums. Everybody wants them, but very few producers/engineers are able to achieve them. I believe this is one of the hardest challenges of a hip hop producer: to make the kick drum loud, and the song itself loud, while avoiding having your kick drum squashed by the mastering compressor.

I'm talking about mixes like Dr. Dre's "Xxplosive", 50 Cent's "In Da Club", Fort Minor's "Remember The Name". To me and a lot of other hip hop producers, I believe, those mixes are good one to chase. The RMS and perceived loudness of the songs are really high, but still, the "knock" factor is there.

I was having a hard time achieving this back then. I either had my kick knocking while my master was quiet, or my master was loud but the kick drum lost its impact. Of course, the records I'm talking about here were mixed by professional engineers on expensive equipment. But I think the tip I give you here will bring you a lot closer to a hit kick.

Take a listen to the final result of this tutorial:

To do this, you have to understand the sound physic behind the problem. The sound of a kick drum typically contains huge amount of low frequencies. This is why they are kick drums. And what you have to know about low frequencies, is that the lower a soundwave is, the more energy it contains, and the less you hear it.

Our ears can perceive something like 40 Hz and above. Below that, it's more about physically perceiving the sound rather than actually hearing it. Those soundwaves are just too long for our ears, but because of their strong physical impact, we can feel them.

This transition from "hearing" to "feeling" in the low frequencies is what usually tricks a lot of producers/engineers, and makes them confused about how to place the kick in the mix. When you try to make a song loud, you have to decrease its dynamics by compression and limiting. And in this, you can only do so much gain reduction before the limiter starts to act in a strange way, killing the life out of your mix. The kick drum is usually the element in hip hop mixes which mastering limiters are "fighting" with, because that is
the loudest part of the mix.

Under 40-50 Hz, there are a lot of content in a kick drum which you can't really hear, but still, it triggers the limiter, pushing it closer and closer to the point of squashing your mix. So, to make a kick drum loud without ruining your mix, you have to sacrifice some low end energy in order to be able to turn up the kick volume. I show you how to do this.

This is hands down the most important step. But what is the right kick drum?

The answer is, the one which fits your beat. If you have a beat with relatively few instruments, you can use an 808-like, low, sneaky, heartbeat-style kick drum. But if you have a lot going in in your mix, choose a more "colored" kick, one with more "character".

Listen to these examples in order to understand what I mean:

The reason you need to be careful with this, is because if you choose the wrong kick drum, you can EQ, compress and mix it until dawn, but you won't get the sound you're looking for.

If you have a mix with a lot of space, you can have an 808-like kick. But if you have all those synths, pianos and strings playing every note on every octave, a kick like that will not be able to cut through the mix. Don't be like me, and try to force the wrong kick into the wrong mix—unless your goal is a high level of frustration!

In this tutorial I'll use a more crowded mix, because it's harder. If you can do that, you can easily do it with a spacier one.

3. Record Your Kick at the Right Level

If you're recording your kick from the analogue realm, it's important to do it at the right level. Here, I'll record the kick from my Akai MPC 500 into Samplitude. The process is the same in all DAWs.

Make sure that the peak level of your kick while recording is somewhere between -10 and -6 dBFS. This is very important. If you record it at a too hot level, it will distort your kick. And this is the last thing we want, because it will get enough distortion through mastering.

If you record it at a too low level, noise can appear. You may think a little bit noise won't hurt, but a quiet noise at -30 dB can be sound like a monsoon wind after compression and limiting.

As I said, making a kick stand out in a loud mix requires you to sacrifice some low end content in order to get more volume. You can only have two of the following three options: a loud mix, a lot of subs in the kick, and a loud kick. Choose!

In order to carve out some low end from the kick, use a normal equalizer. In this tip, I'll use a Waves REQ 4.

You'll have to try different settings by raising and lowering the filter frequency. I did it at 80Hz, but sometimes that is too much—it depends on the actual kick sample.

Filter out as many lows as you need to turn up the kick volume, but not more. Accuracy is crucial here. Carving out too many lows will make your kick lose its impact. And leaving too many subs in will be an obstacle when you try to increase the kick volume.

Usually, you don't need to do this step, because most of the kick samples you use are probably already compressed. So look at this step as something you only do if you don't find success after doing everything else.

Try to make the most impact by reaching the lowest possible kick level. Or, in other words, get the most "knock" from the peak level of your kick.

Compression can help here. But know that your kick is probably already compressed. The mastering compressor will compress it even further, as will the mastering limiter. So at this point don't go above 2 dB of gain reduction.

I use a compression setting with a fast (9 ms) attack, and a ratio of 3.82. Set the release to a point where the compressor stops compressing before every other kick hit. 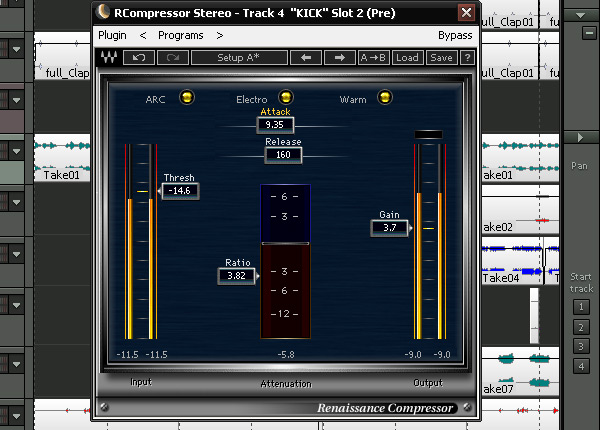 6. Make Space for Your Kick

In order to make your kick's remaining lows work, you have to do some clearing in your mix. To me, that usually means HP filtering every instrument which is not a kick or bass. Pianos, strings, synthy, vocals, percussions, hihats, everything. All of their lows need to go, at least from 120-150 Hz. I sometimes go up to 250 Hz.

I do know that a lot of pianos or strings have content there, but the main thing to do here is sacrifice. A nice piano's low end may sound good, but it's not why the piano is there. It's there for its mids and highs. Let the low end of the mix be dominated by the kick and the bass. 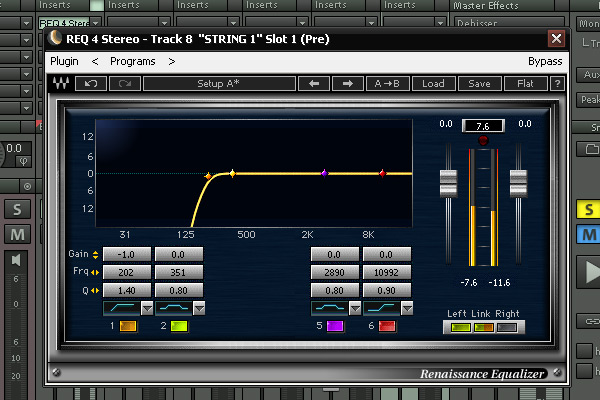 7. Set the Volume of Your Kick

This is what we are here for. If you're after those strong hitting, loud kicks, the task is obvious here. Set the kick to a high level.

My kick here is around 6 dB above the mix. Yes, without the mastering effects on it, it doesn't really sound right. The kick is a little bit too loud. But, this is what will make it really stand out after mastering.

Let's see what we've got. I will use a compressor (an UAD 4K Bus Compressor) and a limiter (a UAD Precision Limiter). I use Universal Audio DSP-powered effects, but if you use Waves, you can do the same with the Waves SSL Compressor (almost identical to the UAD version) and the Waves L3 Multi-Ultra limiter.

First, instert your compressor. I use a mastering preset in a slightly modified version, with a 1 ms attack, auto release and a ratio of 4:1. Set the treshold so you can apply around 4 dB of gain reduction. After we put on the limiter, you can use the makeup gain on the compressor to add volume.

After the compression is working, put up your mastering limiter. At this point, all you really have to do is push volume. On the UAD Precision Limiter, it can be done by turning up the input knob, on the Waves L3, it's by turning down the treshold. Push it until you get the volume you're after. You're done!

Let's review what we've accomplished. Here is the final result of this tutorial:

Compare that to what it sounded like before mastering dynamics:

Find your perfect hip hop music on Envato Elements now, to amplify your next project!

Gábor Szurdoki
Helli, I'm Gábor Szurdoki, a web designer, web developer from Hungary, founder of Nightworld Design brand. 2016 is my 6th year in this field, and I love it. I had the opportunity to work on over 100+ websites for businesses from Hungary, USA (Florida, New York, California), Malta, Germany, and a few other regions. I have worked with clients such as the well-known rapper The Game, and the Billboard #1 producer SermStyle. Me and my business are ready to help you with everything we can offer! Check my portfolio at www.nightworlddesign.hu/referenciak Have a successful day!
designsatnight
Weekly email summary