How to Mix Pad & String Sounds to Create an Atmospheric Backdrop

Twice a month we revisit some of our reader favorite posts from throughout the history of Audiotuts+. This tutorial was first published in October 2008.

Following my tutorials on creating a house drum track and making electronic basslines, we now come to the next stage of producing our virtual track, adding a pad and strings.

Although pads are usually subtle sounds, they can be all-important when you need to add atmosphere to a track. Even though these sounds may only amount to a backdrop, it’s well worth investing some time into creating them.

These tutorials are completed in Logic Pro 8 and in one particular style of house but the techniques are very much generic and can be applied to any software and genre of electronic music. Obviously this track isn’t going to be a chart hit but it should give you some guidelines as it unfolds.

When your drum and bass tracks are working well together, it’s time to choose a basic instrument to lay down our initial string pattern. Don’t worry too much at this point about the sound and type of instrument as this can always be changed at a later stage.

In this case I have opted for a very simple Logic Pro synth called the ES E. This synth is based on a single oscillator fed through a filter, some envelopes, chorus and ensemble effects. Only basic sounds are possible but this is more than suitable for playing our basic pattern.

I have chosen a basic bright synth string sound. The qualities of this sound make it well suited to playing a rough part, as it can be clearly heard in the mix, allowing us to easily discern what is suitable and what is not. 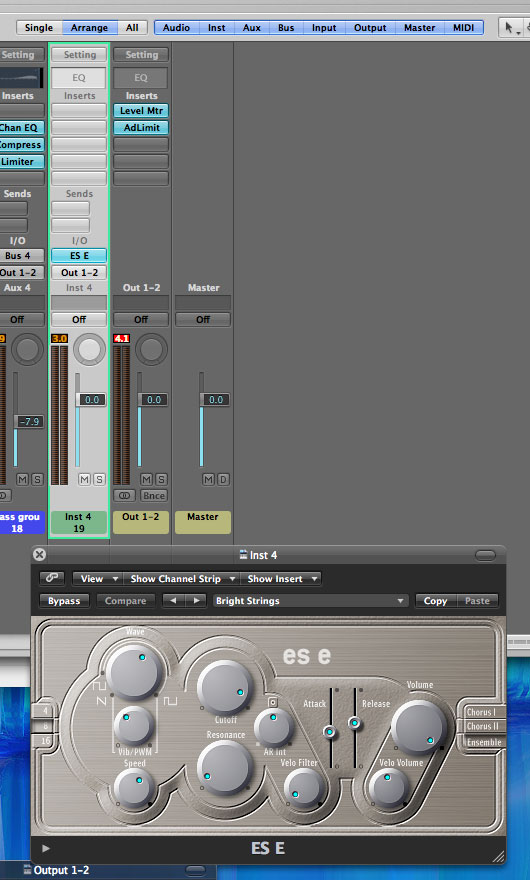 For this string part, I have played a very simple pattern, containing sympathetic melodies and only using a few notes at a time. If you are feeling a little more ambitious (or have decent keyboard skills) then you may want to use more complex chords. If not, this is a good foundation.

Don’t worry too much about your timing at this point. Things can be tidied up as you go, just concentrate on getting the progression right. There should be a comfortable marriage between any progression in your bass and this new part. Get this right and you’ll have a strong base to build the rest of your instrumentation on. 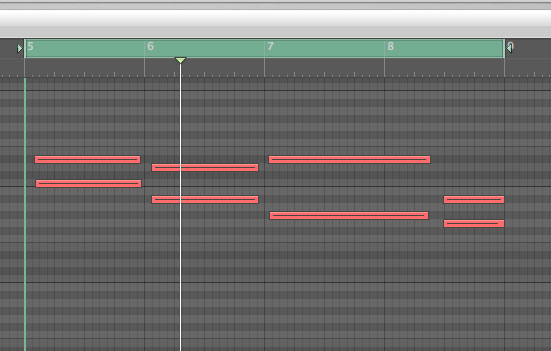 Once you are happy with the feel of the part you can concentrate on the timing. If you are building a track with a lot of groove and swing you will obviously want to use the same quantize settings throughout. It is likely you will have already applied this to your drums and bass, so the same quantize or groove template can be applied to your strings. 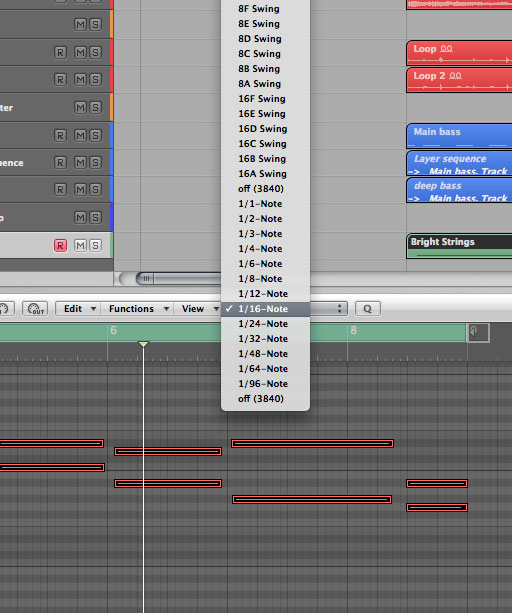 As the bass and drum parts in this track were heavily quantized, I have followed suit here and applied a similar treatment to new string part. I tried to use a 16th note setting initially but resorted to an 8th note setting and some manual correction to get everything in line. I also used a force legato setting to stretch out the length of the notes, resulting in continuous playback of the sound. Most sequencers will have this option within their midi editors. 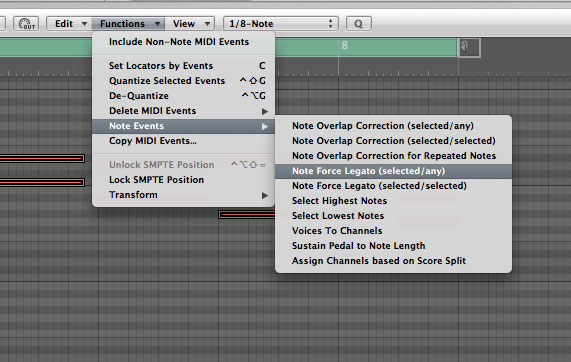 Strings with Quantize and Legato

At this point, you can turn your attention to the actual sound. Although I was reasonably happy to stick with the basic ES E synth as a foundation for the pad sound, I felt it needed some tweaking to make it a little easier on the ear. I rolled off some of the higher frequencies using the built-in filter, added some light vibrato and opened the attack and release settings on the amplitude envelope.

Although this is still not the finished sound, the alterations go some way to making it a useable part of the overall mix. Of course if you feel you need to, you can call up a completely different instrument. 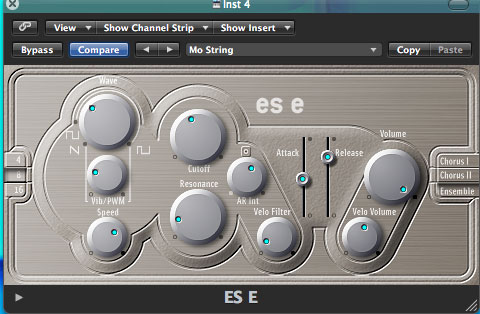 Now the sound is closer to the finished product, you may become more aware of any gaps in your MIDI part. I felt I needed to add more depth to the pattern, so I added some extra notes.

Adding notes an octave below the root of the original sequence will obviously add low frequencies to the part and also introduce extra harmonics. I also added some higher notes, to add further interest to the part. Essentially, I built a chord manually. If you prefer this can be played live with your MIDI controller and recorded. 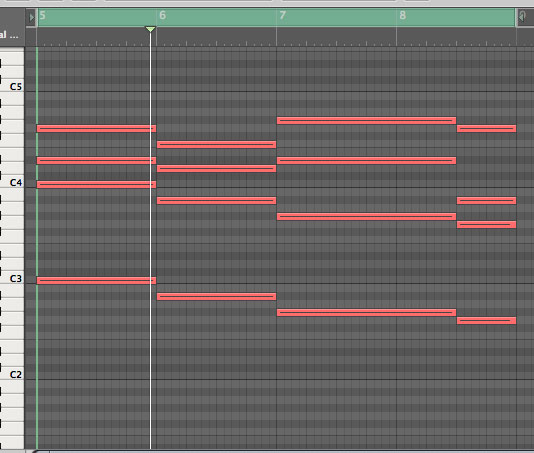 To add an extra dimension to your sound it’s always a good idea to at least try some layering. In this case I felt it was essential as the initial sound was a touch plain and flat. I searched for a preset that was a little more ethereal and synthetic than the synth string from the ES E. I settled on using Logic’s ES2 soft synth. The ES2 is a more complex polyphonic offering with a large preset database.

Once I had tweaked the sounds parameters slightly I introduced it to the string synth and auditioned a basic mix. On doing so I realized it would sound better an octave up. Once pitched up the secondary sound added brightness and presence to the pattern. 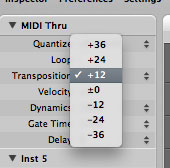 For a final touch I inserted a reverb plug-in onto the secondary pad sound’s channel. This not only adds space but hopefully sets this sound apart from the first, producing contrast and further depth. I then performed a basic mix of the two sounds to get a good relative balance. 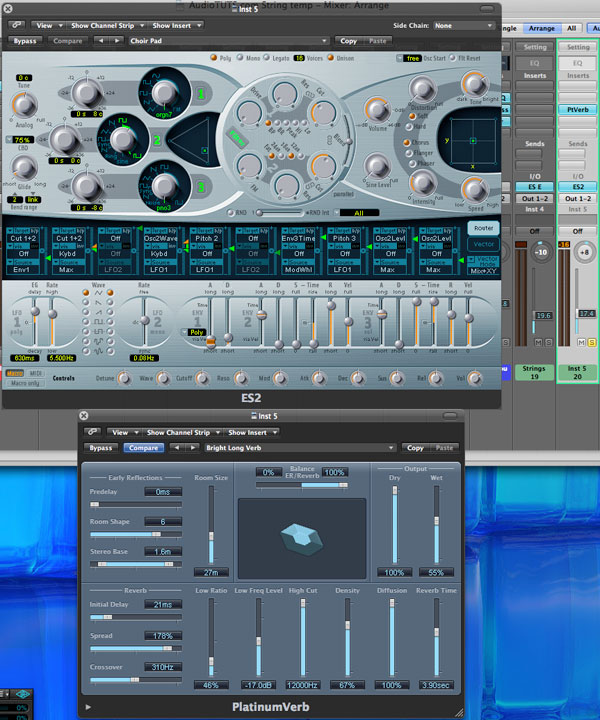 Although the two sounds were working pretty well together at this point, some extra processing was needed to marry them to the rest of the mix. The two pads are fed to a new group and the sound’s low frequencies are cut below around 270Hz, to ensure they don’t interfere with other instruments in this area.

A sidechain compressor is then used to duck the pad group, using the kick drum as the trigger. This will allow our drum track to be heard clearly and avoid any masking that the pad may cause. To keep the peaks of this compressor under control some very light limiting is applied directly after the compressor. No extra equalization was really needed with this sound but if you feel you need to apply some, this would be a good place to do it. 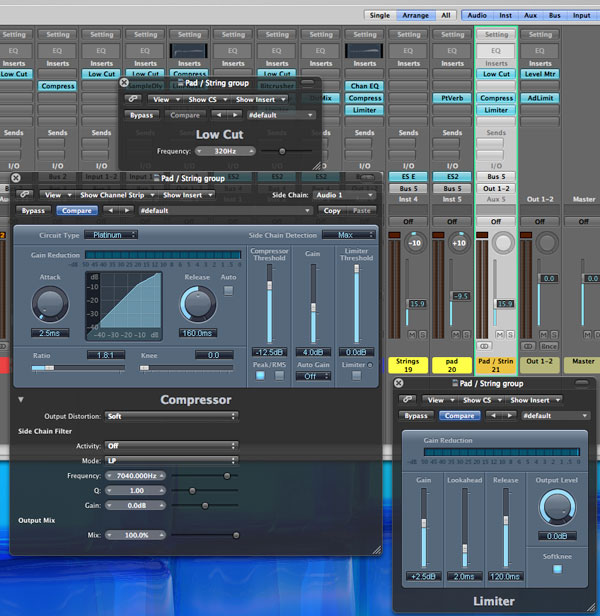 I have used two sounds here but if you felt the need you could definitely use more. The only real limit is your imagination.