How to Mix the Bass Guitar

The bass guitar, along with the drums is the foundation of the rhythm section. It needs to sound deep and punchy without overpowering other elements in the mix. We need the bass guitar to groove and supply us with a steady rhythm as well as defining the melodic and chordal structure of the song.

In the following Basix tutorial I'm going to go through a few of the factors that can make your bass guitar sound better. We'll be using EQ to sculpt our bass sound, compression to steady our dynamics as well as discussing the use of amping afterwards and the taboo of using reverb. 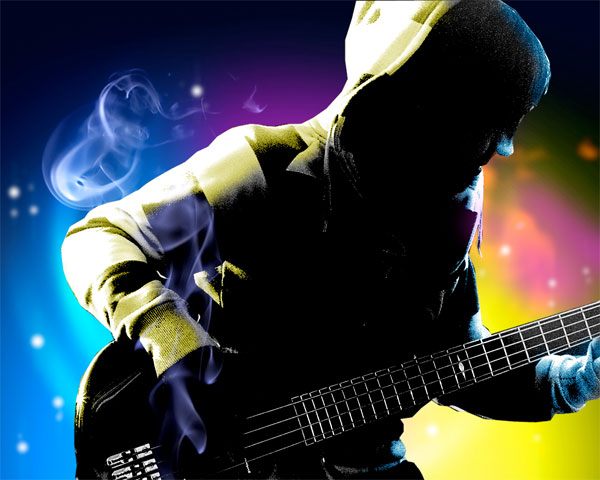 First of all, the general rule dictates that bass instrument should be anchored to the center. I wouldn't recommend panning your bass guitar around the stereo spectrum much since it will just weaken the overall impact of the bass track. Low end instruments such as bass guitar and kick drum as well as driving elements like the snare and vocal should be placed in the center.

We'll be using a bass track played by a friend of mine, Jorge Perelló. You could do worse things than check out his Myspace page, and give his interesting songs a listen.

I actually equalize a track before I compress, but then I place the compression plug-in before the EQ in the insert chain. It's an easy way to trim the fat from the track before you compress the bass and make it steady. I needed to cut out a few frequencies in order to fully appreciate the sound I had, so if I had compressed the bass beforehand those frequencies just would have annoyed me and I wouldn't have been able to correctly compress the bass guitar to my liking. 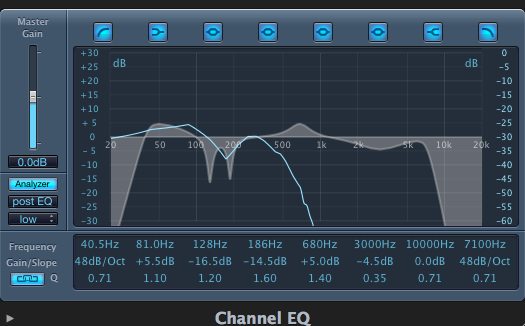 See here where I cut both at 128 Hz and 185 Hz. By sweeping the spectrum with a narrow boost I was able to pinpoint those annoying frequencies that were very unflattering to the sound of the bass. The low mid frequencies can cause frequent problems in mixing, and the boomy and muddy nature of the low mids can cause instruments to lose clarity and punch. I cut out the problem frequencies in the low mids and decided to give the bass guitar a little low end boost at 80 Hz. The combination of the low shelving EQ and the filtered low end causes the shelving equalizer to look like a broad bell boost, instead of the low end shelving EQ it's supposed to be. But that's ok, we only want to give it some boost in that area anyway.

Due to the funky nature of this particular bass track I wanted to bring out a little bit more of the attack of the strings. By boosting around 700 Hz, or 680 Hz to be exact, I was able to accent the subtle string sound of the bass guitar. Unnecessary slap sound from the fingerboard can be cut out at 2-3 kHz as well as giving a little space for the vocal that resides in that area.

In my opinion, EQ is the most important tool to master as it can have such a profound effect on your tracks. With only EQ we've managed to filter out unnecessary high and low end, cut out extravagant muddiness and enhance the frequencies that flatter this particular playing.

This is what we started with:

Here is the bass guitar track after we've EQed it.

Much tighter, cleaner and better sounding.

A quick note on filtering: Some engineers get pretty drastic with their filtering, wanting the bass to only occupy the very low end of the bass range. Therefore they filter out everything else to make room for all the other elements a song might have, such as keyboards, guitars, lots of vocals etc. Popular music can sometimes have this sort of approach, where the bass is filtered drastically like in the audio example below. In solo mode it might sound pretty drastic to untrained ears, but when you pile on layers of instruments found in a typical pop song you sometimes won't notice that there is something lacking from the bass guitar's high end.

Compression, in this instance, didn't play such a pivotal part in shaping the bass guitar sound. Having a good bass player with a steady hand can be a really good substitute for compression, as this case demonstrates. The playing is very steady and although dynamic, isn't all over the place like you would find with an inexperienced bass player. That said, I did insert some compression on the part, but mostly for evening out the peaks and controlling the overall steadiness of the bass guitar part. 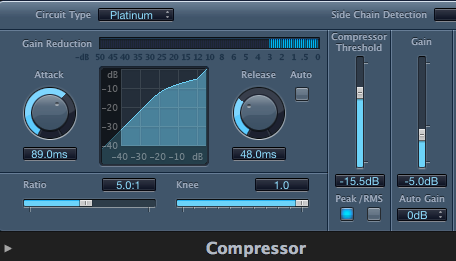 I usually start with a ratio of 8:1 on bass tracks but I trimmed it down to 5:1 since it didn't seem to need any heavy handed compression. This is very “suave” compression, as the knee is also very soft, gradually applying compression instead of clamping down on the sound right away. I didn't want to clamp down on the funkiness so the attack is set fairly slow, but the release much faster, allowing the bass to breathe.

Here's what we've got so far:

Reverb can throw any definition and clarity of the bass guitar out the window. Adding reverb will instantly make a bass lose punch and sound muddy in a mix. It's a good idea to steer clear of any reverb when creating your mix due to aforementioned consequences, although some tracks have used reverb on their bass tracks for effect. The song Hang Me Up to Dry by the Cold War Kids is a good example of a bass guitar with reverb that actually adds to the song instead of buries the low end in mud.

Just listen to how reverb can quickly ruin our bass track in the following example. 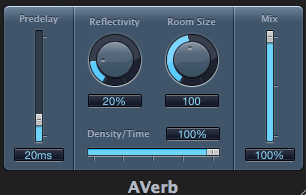 So you see how reverb on the bass would leave the low end unanchored and shaky instead of tight and well defined. Leave reverb on bass guitar for effects only, but not as a integral part of the sound.

This bass was recorded direct, through a DI box straight into the desk. Sometimes this can leave the bass signal a little dry and lifeless. The playing shines through but there's something lacking from the sound due to the lack of recording through an amplifier. Using amp simulators can quickly give a nice rounded and amplified edge to the bass guitar's DI signal. You could say that we're cheating by adding an amp sound afterwards, but sometimes that's what we need to do to get a good source sound that we can play with afterwards. 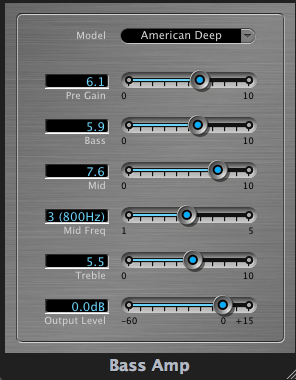 Listen to the added sound Logic's Bass Amp give the signal.

and transformed it into a nicely EQed, compressed and rounded bass track.

Using the typical mixing tricks of EQ and compression with a little cheating in the bass amp department we're able to mix together a nicely sounding bass guitar track in just a few easy steps. Now, depending on the genre, sound and wants of the mixing engineer and bass player we would maybe EQ differently, compress harder or add different effects such as fuzz or distortion for an extra edge to the sound. Also, depending on the context of the rest of the instruments we might need to accommodate the bass part with more cutting to make it fit in with the rest of the instruments such as the kick drum and electric guitar. But for now, following these easy steps I hope I have given you a sense of direction when it comes to mixing your bass guitar tracks.

Any great effects or tips you have added to your tracks that you would like to share? Any drastic EQing, crazy effects or overdrive that have worked well for you? Share it in the comments!