One of the key parts of making your mix work as a single entity is carving space for each element to live in. In the past I have completed tutorials on mixing bass and drum parts, here we'll be taking a look at how you can help your synth top lines sit with the rest of your instrumentation.

I have constructed a small mock project and written a step by step a account of how I married the new top line part with the other instruments in the track. I don't expect the music is going to win any awards here but I hope that it helps demonstrate how easy it is to transform something average into something usable.

I have used Reason 4 here but you should be able to easily translate all of the techniques used to any other major DAW. As usual comments and questions are more than welcome.

Ok, so here is the original loop we'll be using. It's constructed using about four different parts including drums, percussion, keys and bass. This combination makes for a reasonably full sonic spectrum and the balance is decent enough to producing a pleasing result.

At this point a synth lead is a perfect accompaniment and is a great alternative to a guitar or wind solo. Synth top lines are also much more convenient to record and edit, given that most of us are mixing entirely 'in the box'. All this said it's important that enough time is spent preparing our new part so that it marries well with the rest of the mix.

Obviously the following steps only represent one way of producing and mixing a synth lead, this is certainly not intended to be a definitive guide in any way. 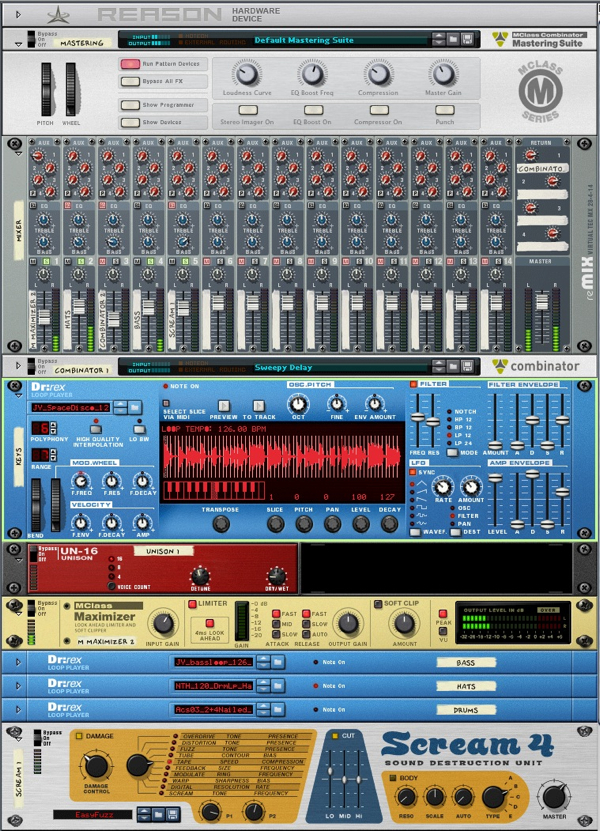 The loop in action.

The loop with no top line synth yet introduced.

The next step was for me to choose a lead sound and I decided to go with a preset from Reason's excellent 'Thor' synth. With the new patch in place I recorded a very simple, rough lead part. At this point things don't sound too hot, everything is pretty much in key but the timing is a little sloppy and the sound really doesn't sit well in the mix.

Let's move on and look at ways we can improve the situation. 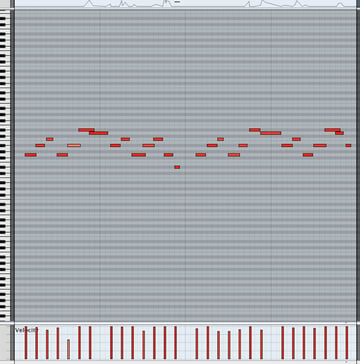 The top line in its raw state, sounding rather rough!

Before we add any processing to the sound it's best to pay some attention to it's timing. As I mentioned earlier my playing was pretty sloppy and leaves a lot to be desired, this not only sounds messy but also makes the sequence stand out from the rest of the mix.

Of course sometimes you will want to apply some groove and swing to your part and this is really personal preference and also can be pretty dependant on what groove you are already working with. In this case however everything was already pretty straight up as far as groove goes, so I felt that some simple 1/16th quantisation would really help.

Although this simple move does help to tidy things up I also took a look a the way the sequence was programmed (or in this case played!). I wanted to make sure that the sequence flowed and felt fluid. This really just involved changing the length of notes until I was comfortable with the overall feel. As I had the Thor set to 'legato' mode and automative portamento any overlaps created a nice glide effect here.

The sequence now felt a little tighter and touch closer to what I originally envisaged but the actual sonic character of the part was still lacking and the whole thing felt a little dull. Let's look at what I did next to combat this issue.

Some quantisation and editing applied.

One of the most important processes when persuading any sound to sit in it's own space in the mix is equalisation. When treating sounds that live in the higher end of the frequency range, such as this top line, we should be thinking about filtering out any low end. In fact here I removed everything from about 300 Hz.

This technique really has two effects, first up the sound no longer clashes with any of the other instruments fundamental frequencies making it clearer and more defined. Secondly my removing lower frequencies and increasing the sounds level you are effectively boosting the high end and in turn making the sound brighter.

To be 100% honest, the EQs in reason are slightly limited, in as far as they don't actually feature variable high and low pass filters. But saying that, Thor does feature excellent variable state filters. In this instance I used a health mix of the MClass EQ and the Thor's high pass filter model. You can hear from the example that this processing has really helped the sound on its way.

The top line with some eq and filtering applied.

With the basics of timing and equalisation in place we are ready to start adding some decorative touches to our sound. Before I started adding any effects I edited the patch slightly to open the sound up a little. I added some extra release to the amplifier stage to make its response a little smoother and also softened the filter section up a touch. This generally made the sound easier to listen to.

I then moved onto some processing. I have opted for a full blown effects chain which starts with some valve saturation courtesy of the Scream 4 processor. This adds some grit and also a bit of volume.

Next up I used a simple unison unit for some extra width (this is preceded by the equaliser from step 4). The unison is then fed into a reverb and delay. These are both mixed in very small amounts and add space and dimension to the sound, sort of an essential element for a synth lead in my opinion! 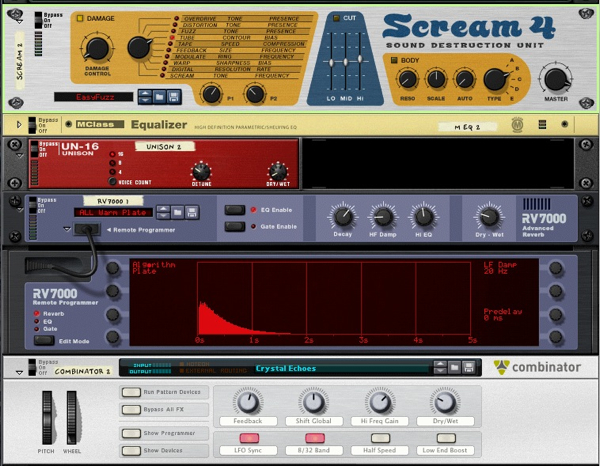 To top all of this off I added some very light modulation data to the patch. This was achieved by recording small movements of the mod wheel at key moments in the sequence. As the patch was already set up to create a vibrato effect when it received this data it was a pretty straight forward process. This extra performance effect added a nice touch and made the whole thing a little more varied.

Some vibrato was added using the mod wheel.

The patch with effects and modulation.

Our sound now sits in the mix considerably better than it did when first recorded. Some may feel that the sound is a little overly effected, of course this is subjective and really down to taste. If you feel you want more control over the direct, dry qualities of the original lead you can try using layering.

I simply copied the MIDI pattern onto a new channel, created a new synth, chose a relatively dry synth patch and mixed in a small amount. This adds a certain depth to the sound and claws back some of the definition after all the processing has been applied to our core patch.