How to Mix Two Kick Sounds Together

Sampling two kick drums together is common practice in audio production. You can layer kick samples for your electronic beats together, or you can drum replace rock songs with a few kick drum samples that compliment each other. But what if you need to use your recorded kick drum sounds, and can't layer with samples? How can you mix together two kick drum microphones in order to bring out the character of each one.

In the example below we have a kick drum that was recorded with two different microphones. The first was an AKG D112 positioned in the front hole of the kick. The latter is a Sennheiser PZM microphone positioned inside the drum, by the beater. This was done in order to get “best of both worlds”, i.e. the thump of the kick as well as the snap of the beater. Having two separate kick drum microphones can then give you a fair amount of versatility when mixing since you can draw out different characteristics from each mic.

Together they don't sound that bad:

But let's see what we can do with some examples.

Let's use the first kick drum as a basis for a thick low end thump. By using compression we can decide which part of the kick we accent. By using a fast release on our compressor we clamp down on the kick drum immediately, compressing the transient from the beater and softening the sound. Don't worry, we'll accent the beater later. Just know that if you want a tight kick you should have a slower attack and faster release, but if you want a thumpier kick that's devoid of attack you should have the attack fast but the release a little slower.

I'm using a fast attack on the VCA compressor setting in Logic. The compressor is compressing around -6 to -8dB on the peaks. But the fast attack and slow release coupled with a nice warm compression setting gives us that boomy kick thump.

Now, since we are only going to be accenting the thick low end on this microphone, it's time to cut our losses and get rid of some high end. Let's insert an EQ plug-in and just filter out all the high end. 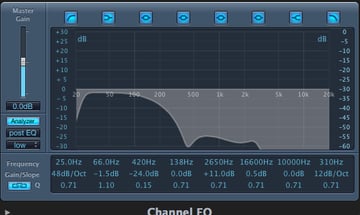 Looks like a scary EQ curve, but since we know we have another microphone that can handle all that's missing, we're not so worried. The low end got a little out of hand with all that cutting, due to the subjective nature of cutting out all the highs it feels like we are boosting the lows. So I leveled the low-end off a little bit and got rid of some of the boxiness that's all too familiar in our kick drum sounds.

Almost sounds like a electronic kick sample. But in reality, the song being recorded is actually a 12-bar blues shuffle!

Now let's divert our focus to the inside microphone. Since we already have the thick creamy thump from the outside mic, let's find a way to get the crisp snap of the kick from this mic instead. Since we didn't want any attack from the beater on the first microphone, having the fast attack eat every inch of our beater and ultimately EQing out the high frequencies where the beater resides, we want to draw out the snap with some compression. 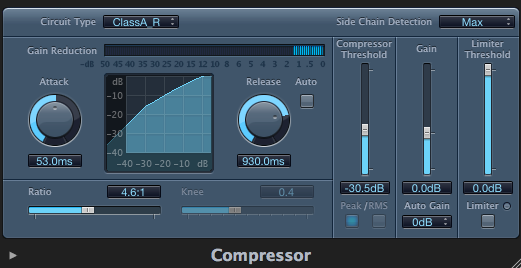 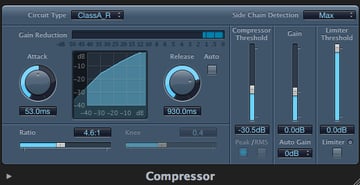 By having a medium attack this time the sound of the beater gets through before the compressor clamps down on it. This track is not compressed as hard, but as usual some experimentation with both compressors can give you different results. Since this is not a compression tutorial per se, I won't go into all the details of fine tuning the compressor.

Listen to the compressor here, and notice that there is plenty of snap present in the example.

Step 4: Bringing out the Beater

Since we don't have any beater present on the other microphone, it's time to accent it on this one. We're going to do almost the opposite of what we did with the first microphone. Instead of cutting highs and raising the lows we're going to boost the high mids where the beater resides as well as cutting the lows. And like earlier, we're getting rid of the boxy middle frequencies. 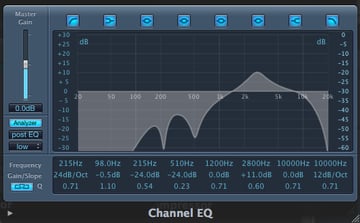 Although this microphone might have plenty of low end to share, we're going to take it out for demonstration purposes. The first microphone supplies the low, the second provides the highs.

Step 5: Mixing the Kicks Together

Now we have a low end thump and a high end snap that we can mix together. Having a fader for both elements of the bass drum gives us added versatility for mixing purposes. We could continue to process these two tracks, trying to get an even better sound from both tracks. But it's clear that by processing both so differently we have created a different sound that wouldn't have been otherwise possible if we only had a single microphone capturing the bass drum.

Here is how the final result sounds. It might sound a little unnatural, but I think that's more due to the light blues playing of the drummer rather than the mixing technique itself. If you were going for this trick I would actually rather recommend you do it for harder genres such as rock and metal, where a heavy hitting drummer is manning the drum kit.

It's amazing how much you can do to change your recorded sounds during mix-down. We're almost to the point where we have so much control over our sounds with all these effect processors, dynamic controllers and EQ that we can fix everything in a mix. However, knowing the amount you can change during mixing is no excuse for not taking the time to get great source sounds at the tracking stage. These samples above were recorded with great mics through a great desk so although I've decided to take such a drastic approach to mixing them, they were still meticulously recorded in the first place.