How to Modulate to Remote Keys

In this tutorial, we are going to learn a few different techniques for modulating to distant keys.

Recently we discussed the basics of how and why to modulate. In that tutorial we focused on closely related keys, as in keys that share at least one chord in common. Distant (or remote) keys are those which share no chords in common with each other.

For example they keys of C major and G major both include the chords C, Em, G and Am. They have four chords that they share in common and thus are considered very closely related.

C major and Eb major, on the other hand, don't share a single triad together, thus they are considered distantly related.

Warning: There's some deep theory in this one. Not for the faint of heart!

The idea here is not just to start in one key and end up in another. You can do that just by stopping one and starting the next. What we want to achieve is a very smooth and logical transformation from the first key to the second.

Each chord can serve one or more interpretations in a progression.

For example F can be interpreted as both the IV chord in C major or the V chord in Bb major.

As music is humming along, the listener can't actually hear the reinterpretation until after the fact. However because music partly relies on our memory of what we have recently heard, whether the chord that follows F makes sense in the key of C major or Bb major, it still makes sense.

The method for modulating between two keys is:

So if we want to modulate from C major to D major we would use the method as follows: 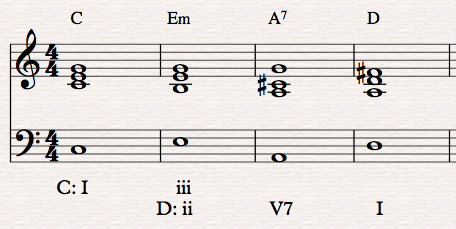 To make these distantly related modulations work, we're going to need some fancier harmonic tricks beyond the diatonic I-ii-V-I progression.

The minor sub-dominant is the IV chord but with a minor third instead of a major third. In they key of C major that means Fm substituting for F.

It comes from the parallel minor key, and thus is a form of "modal substitution," or borrowing from another mode.

You can use the minor sub-dominant in two ways: either in the first key, or the second.

In the first key you simply use iv in place of IV. We could modulate from C major to Eb major with the progression C - Fm - Bb7 - Eb. The Fm begins life as minor sub-dominant in C, but then we reinterpret that to be the ii chord in Eb.

Or we could modulate from C major to B major with the progression C - Em - F# - B. The Em appears as iii in C major, but we reinterpret it as the minor sub-dominant iv in the key of B.

The Neapolitan 6th (or N6) is a non-diatonic chord that is often used a substitute for ii or IV. In modern terms you can basically think of it as bII in first inversion. So in the key of C, that makes it Db/F.

Because it is a substitute for ii or IV, it is best used immediately before the V chord. Traditionally N6 was only used in minor keys, but contemporary use allows it in either major or minor keys.

The N6 is a good way to get between keys that share little in common. For example you could modulate from C major to F# major with the progression C - G/B - C# - F#. The G/B begins as V in first inversion but is reinterpreted as N6 in F# major.

Essentially when the keys share no chords in common, even with the advanced harmonies, you find a third key that does have something in common with both of them.

So for our C to C# example:

Phew! I know that's a bit intense and requires a lot of theory gymnastics, but walk through it one step at a time thinking about how each chord relates to all the keys in question.

Some theorists have elaborate methods for modulating between enharmonic keys; in other words, something like C# major to Db major. I think this is purely a notation trick because as far as the music is concerned the two keys sound the same.

If you really wanted to, you could use the techniques discussed above to get you there, but it doesn't make much sense in my book.

Will you ever need to get smoothly from Eb major to B minor? In reality, probably not.

But forcing yourself in a systematic way to internalize and absorb these kinds of modulations can make your actual writing much more harmonically rich and adventurous.

The more time you spend taking in the intricate relationships between different keys and chords, the further away you'll get from using the same chord progression over and over and over just like everyone else!