How to Process Loops & Phrases with Reason’s BV512 Vocoder

The BV512 Vocoder that is supplied with Reason is a really flexible virtual device capable of some really intelligible classic vocal effects. But it is just as usable when it comes to processing drum loops and musical phrases. Once you get your head around the routing, you can use the BV512 as a robotizer, comb filter and even for EQ. Here’s one way you can make it sing.

We’ll start off with a simple Reason rack with one mixer and a BV512 vocoder. I’ll then build the demonstration project around this bare-bones set up, but before we do let’s take a closer look at the units basic operation and the front and rear panels.

The BV512 is a pretty simple processor and doesn’t even have a preset library so there is certainly no steep learning curve here. To really get the most out of this device you just have to understand the basics of vocoding and some simple routing techniques. 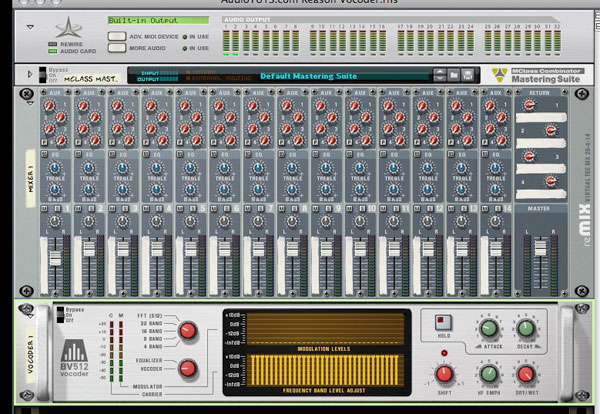 To the left of the front panel there are input meters for both carrier and modulation levels. These are the two signals needed to create a vocoded signal. The Carrier is traditionally a synth or keyboard sound while the modulator is often a recorded or live vocal. Of course these are not set in stone rules, and can be changed as we will discover here.

Moving further to the right we can see two knobs. The top one is a ‘band’ control. This will change the amount of bands the vocoder uses to analyze the incoming carrier signal. High values will result in clearer more intelligible results, whilst lower settings will produce grittier and more artificial sounds. The lower knob simply switches the BV512 from vocoder to EQ mode.

To the right we have further sound manipulation tools in the form of an envelope follower, with hold function, formant shift control, high frequency boost and a simple wet/dry mix parameter.

To create the required set up in our rack I have inserted two Dr. Rex players. You really can use any combination of sound sources here — for example a drum machine and synth or sampler — but I am using stock loops for the Dr. Rex, for convenience and speed. 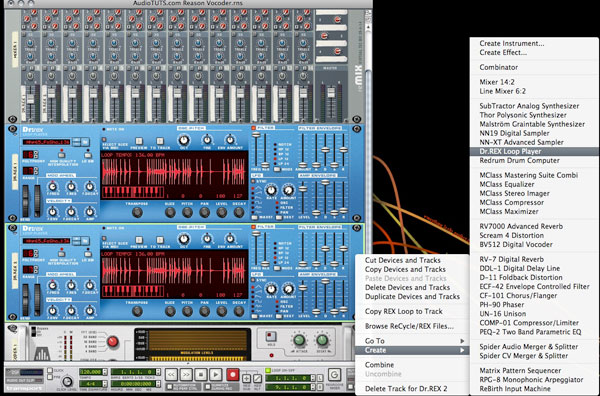 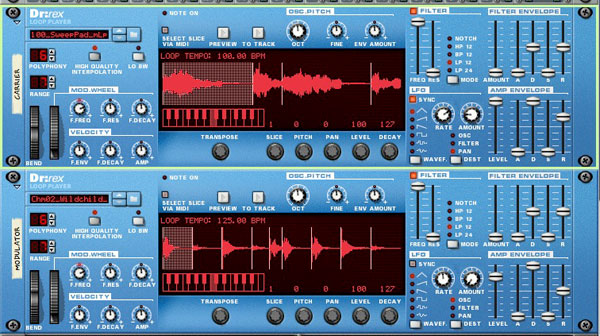 I have then loaded a pad into the first Dr. Rex and a simple drum loop into the second. As I said previously, these are sounds from the Reason sound bank so don’t expect too much here! The devices are then flipped around and both disconnected, as the auto-routing Reason will have used is of no use to us for this technique. 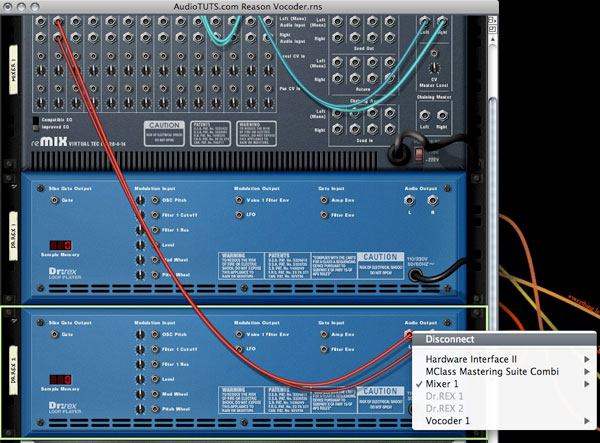 To get some signal flowing through the vocoder let’s temporarily hook it up in what could be seen as the traditional manner. The pad sound is routed to the carrier inputs and the drum loop to the modulator. With this routing the pad will be effected by the transients of the drums and will create a robotic back drop to the beat. 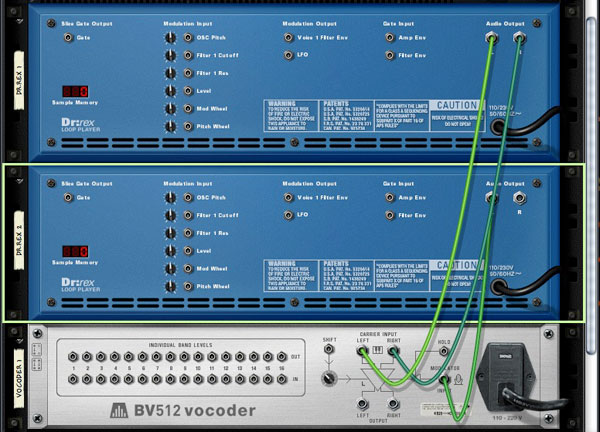 The main outputs of the vocoder then have to be connected to the mixer so that we can hear it. On previewing the two loops you should now be able to hear a simple vocoded signal. 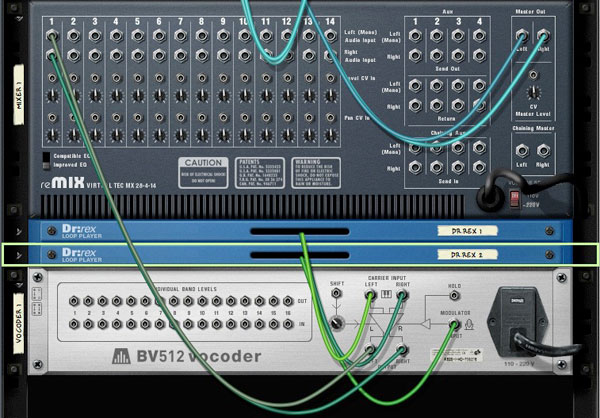 Things can get a little complex from here, so in an effort to keep things clear you can start to name your devices accordingly. For instance I have named the two Dr. Rex players ‘carrier’ and ‘modulator’. This will at a glance tell us which signal is which.

With the current ‘traditional’ routing we are able to mix between the vocoded and dry signal using the wet / dry mix function on the BV512’s front panel but this can be pretty limiting. We are not able to process each channel individually. For example, we may want to apply some EQ to the dry drum loop and some delay or reverb to the vocoded pad sound. To achieve this we must use some slightly more creative and complex routing techniques.

To start with create a ‘Spider - Audio merger and splitter’ device. This small unassuming box will allow us to separate our signal and give us more control. 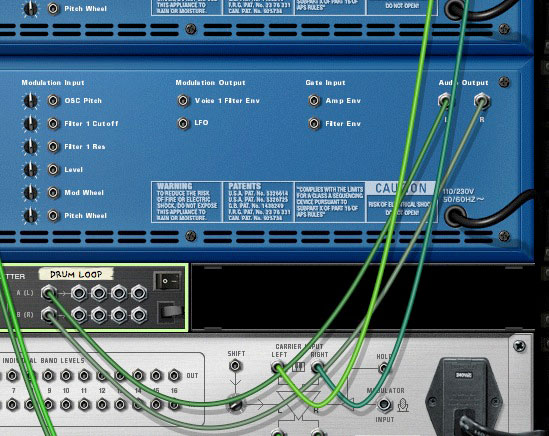 Now feed the outputs of the second Dr. Rex to the left and right inputs on the right of the Spider, then take the next two outs to their own stereo channel on the mixer. You are then able to take a mono feed from the next Spider output to the modulator input of the vocoder.

This essentially means that the vocoder is receiving the correct signal to process our pad sound but you are also able to mix both the dry drum loop and the vocoded pad independently on the mixer. The wet/dry control on the vocoder can then be left at 100% wet. 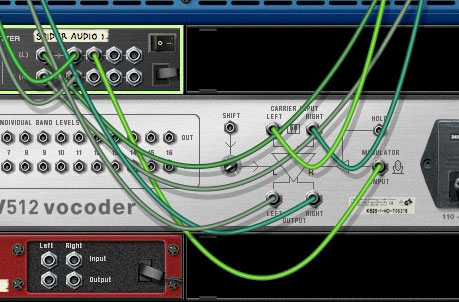 This routing technique not only gives us control over both signals but also allows effects processors to be inserted into either signal path without effecting the operation of the vocoder. As you can see in this instance I have used a digital delay line directly after the vocoded pad sound to add some space. This is then fed directly to the appropriate channel on the mixer and can be fine tuned as before.

Again to keep things clear, it can be a good idea to name the last device in each chain ‘drum loop’ or ‘vocoder’. This will make this name show up on the corresponding channel on your mixer and as your project grows will give you much faster access to each instrument.

My final touches were to fine tune the vocoder’s settings and sound. I started by lowering the amount of bands used. This gives us a more robotic, synthesized sound. I also rolled off some of the lower end frequencies being processed by bringing the lower bands down in volume.

I then used a short attack and pretty quick release time to keep things tight, turned the high frequency boost all the way up and knocked the formant shift up a touch to make things a little brighter.

As I mentioned before there is some delay inserted in to the signal here for space and the final step was to compress the whole thing to bring some of the wayward peaks into line.

Final result of our vocoding setup

The final result is the pad sound ‘ringing’ in time with the drums, adding an artificial quality to them. As I mentioned at the start this can be achieved with any two sounds, but hopefully this shows you that some simple routing can give you really precise control over not just your levels but the balance of dry and processed signals.