How to Program and Produce Beats with Propellerhead's Redrum

If you are a Reason or Record owner you are lucky enough to have access to one of the best virtual drum machines out there. Making great beats quickly is a breeze using its step sequencing system and editing sounds is just as easy.

In this tutorial we'll take a quick look at sample selection, step programming, midi programming, routing and mixing. With these techniques under your belt you should be set up to produce cutting edge beats.

The Redrum drum machine features ten possible slots in which you can load samples into. These sounds can either be loaded individually or as an entire kit. We are going to load some single sounds and then save our new collection as a kit for later use.

Each slot of the Redrum has a disc symbol towards the upper part of the interface. This is used for loading sounds into each slot. On hitting the Reason (or Record) browser will pop up allowing you to navigate to your samples and select one of your choice. In this case as we are building a kit I'll go for a kick drum first.

Loading sounds is achieved by using the disc icon in each slot. 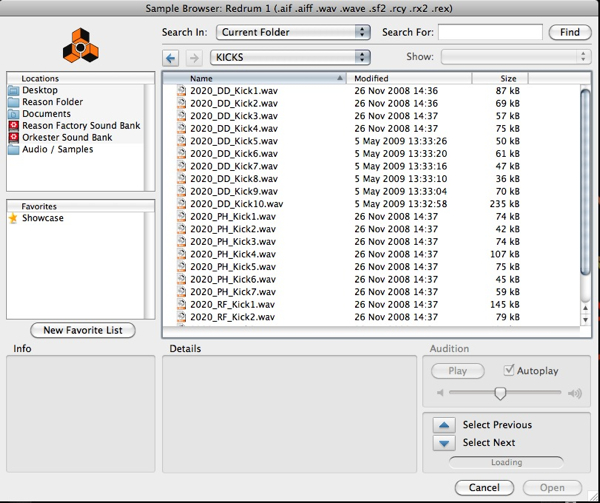 With our first sound loaded you should be able to audition it using either the play key at the top of the appropriate slot or by using your midi keyboard. With this first sound loaded you can repeat the process as many times as you like, until the entire ten slots are filled. I have built a simple kit consisting of six sounds, including basic drum sounds, percussion and high hats.

This collection of sounds can now be saved as a kit so that you can load it easily into other projects. To do this simply click the save disc icon in the lower left of the drum machines interface. The name of your kit should now be shown in the small LCD type display.

Now we have constructed a basic kit we can get into some programming. Redrum is capable of acting as both a step sequencer and midi drum module. First of all let's take a look at how it performs step programming, in my opinion this is the area in which it really excels.

In the lower section of the Redrum you will see 16 large white buttons in a row. Each on of these represents a programming 'slot'. Once the step sequencer is running these will show one measure in your sequence. When activated these buttons will light up different colours (depending on what velocity you have chosen).

The sequencer is running.

To program a specific sound use the 'select' buttons at the bottom of each drum slot. This sound can then be worked on and a specific sequence programmed. Let's start by adding a 4/4 kick drum pattern by highlighting a step every four buttons. As you can see programming a simple pattern like this is extremely quick and straight forward.

Continue programming your beat by selecting the next sound and inputting more steps. Every time you select a new sound you will be presented by a blank set of buttons. You can then start to place sounds in the appropriate places to form a new groove. It's surprising how quick this process can be and the results can be really satisfying.

Selecting another sound to use in the pattern.

Obviously there are more advanced features in this section but I've tried to keep things nice and simple, as this is my first tutorial on the subject. I can do a tips and tricks, or advanced technique on the same subject if anyone is interested? In the meantime take a listen to the loop I programmed using only the most basic features of the step sequencer.

Redrum is capable of transforming each of the sounds loaded into it. Although it is not a true drum synth, pretty drastic changes can be made here. At first glance you will notice that every 'slot' is the same and some sections feature different parameters to others. This is is simply so that some slots are specialised for certain sounds. For instance there are a few slots that feature pitch bending which can be great for cymbals and high hats.

The editing parameters differ from slot to slot.

Many of the slots feature extremely useful sound manipulation tools, such as envelopes, start time, pitch, tone, pan and even send slots to add effects. I have applied some very small changes across my drum pattern to either brighten things up or change the length of sounds. This sort of treatment can be really useful when you are dealing with long effects tails or drums with a long release.

By default the entire contents of the Redrum is routed through one stereo output. In a lot of cases this is just fine but in some situations you may want to create a sub mix of the sounds or simply process one sound in isolation to the others. You can achieve this by using the outputs on the rear of the device. By taking a line from the output of the slot number you are focusing on you will break the machines internal routing and feed that drum to any destination you like.

To show you an example of what might be achieved here I have fed every one of my five sounds to a mixer. In doing this I have gained extra control over the balance of the drums and am able to eq and pan the sounds with ease. Although the Redrum has its own send and returns using a sub mix like this gives you the full blown send and return system available on a dedicated mixer. 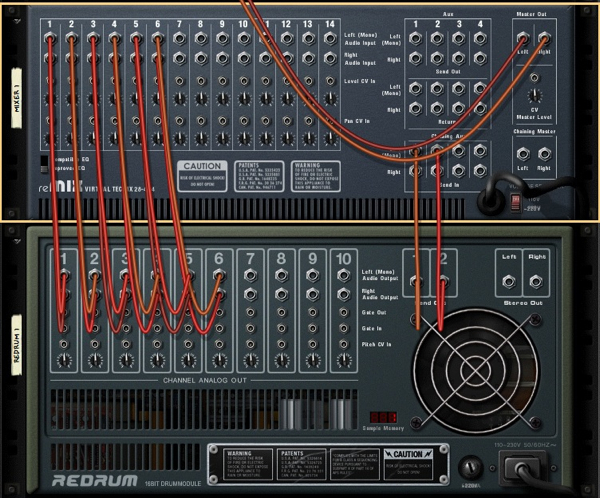 ... And the routing in action.

Other purposes for this sort of routing my include adding insert effects or sending some signal from one slot of the Redrum to trigger a side chain capable compressor.

So our beat is programmed and the relative levels are good. How about some processing to pump things up a little bit and add some depth to individual sounds. Obviously you can add any effect you like to individual sounds here either as a send or an insert thanks to Redrum's separate outputs but we can also treat the whole drum group as one as well.

To demonstrate both methods we'll look at a few examples. First up lets try setting up a send / return reverb on our drum sub mix and add some space to the snare drum. By right clicking on the mixer and adding an RV7000 reverb device our send / return configuration will automatically be set up. We are now free to send some of the snare signal using aux send number 1.

I've loaded a simple 80's gate patch from the Reason soundbank to use here and have sent the snare to it. It adds a fair bit of space and an extra bit of attitude to the overall drum part. You could set up several of these reverbs for each of the sounds in your mix if you like. 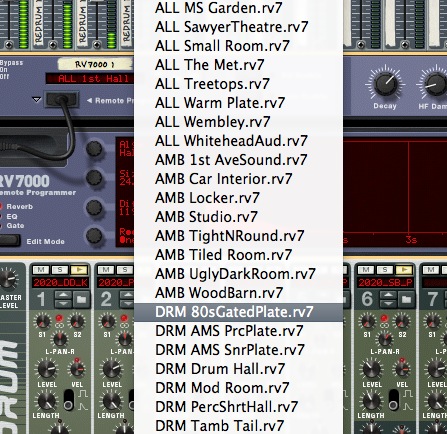 The snare with the reverb added:

I then inserted a Scream 4 destruction device between the drum mixer and the main stereo output. This was used to add some of the excellent tape compression it offers. I didn't push this effect to hard as you don't need much to really add some punch.

The Scream unit is added. 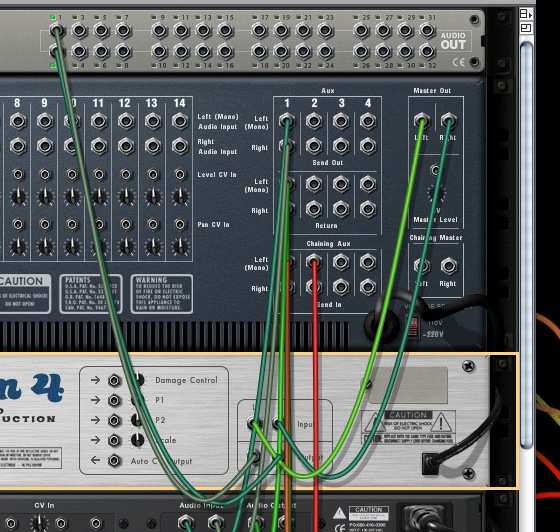 The insert routing is automatically set up.

The whole mix was then fed through a simple mastering EQ and Maximiser to ensure there were no clips etc. As you can hear all of this has really added body to the loop and the drums are sounding pretty good and should work nicely in an arrangement.

The Mclass devices used at the end of the signal path.

If you prefer to edit your drums in MIDI you can always send the pattern you have made using Redrum's step sequencer to a MIDI track. Simply click on the Redrum and select the 'copy pattern to track' option in the drop down menu. The notes will then be sent to the Redrum midi track. Remember to switch off the pattern sequencer if you plan to use this feature though.

Copying the Redrum pattern to a midi track.

The pattern in midi form.