How To Recognize Frequencies

In the last installment we studied the first four octaves of the frequency spectrum with pink noise. Now we'll continue with the rest of the octaves and revisit the others using music samples.

Although the last tutorial was a quick tip, I've decided that it would be better for you readers to get a thorough and in-depth tutorial on the matter. The last tutorial sparked some interest and questions that gave me some ideas on how to further explain this topic in more detail. If you missed the first tut, read it here.

There were some pretty interesting comments in the last tutorial that I would like to address here. I was asked about the relationship between these octaves and the ones in music, and the fact is that I am not really discussing musical octaves. Although each musical note has a specific frequency, like A at 440Hz, I am using these specific frequency octaves to point out how the frequency ranges sound.

An octave is a doubling of the frequency, so that an octave of 100Hz becomes 200Hz. Which then becomes 400Hz doubling with each multiplication. Which is not to be confused with harmonics, which are whole number multipliers of the the fundamental frequency, first harmonic becoming 200Hz, third 300Hz etc. So you could choose any frequency from the spectrum to use as examples, but since these octaves are generally regarded as standard values I’ve decided to use them.

Take the musical note of the middle C, which has a frequency of 262Hz. Now when you play the middle C, obviously you are not only hearing that frequency, but a combination of the fundamental frequency(262Hz) and its harmonic overtones. And the C note an octave higher has the fundamental frequency of 524Hz, double the amount. Knowing this, you could try to EQ in context with the instrument you are playing. If you are playing keyboard stabs close to the middle C, you might try to bring out those frequencies that you know are represented in that specific musical range. Check out Mark Garrison's 8 Easy Steps to Better EQ which has a simple, but explanatory image demonstrating where certain instruments sit in the frequency spectrum.

I really appreciated the comments from the last tutorial and I realize that I might not have been very clear on how to use the examples. I can only speak from personal experience when I say that it has helped me immensely by listening to specific frequencies boosted either in pink noise or music. By trying to picture and remember how each frequency affects an instrument, or a complete mix I can pinpoint a problematic frequency area more quickly.

This has helped me a great deal when I'm EQ'ing live shows since it's a situation where you have to work fast and efficiently. It is also a great help when you need to find and eliminate feedback frequencies that are giving you trouble with the stage sound. Check out the my article on How Monitor Mixing Enhances a Performance for a guide on how to use the graphic equalizer in a live sound situation.

In the introductory tutorial we were using pink noise to hear the effect each frequency band had on the pink noise, which is noise that covers the whole spectrum. This time we'll be using musical examples to hear the difference these frequencies have. I am using examples graciously given to me by the rock band Vicky. They are an Icelandic rock band that have had considerable success in the short time they've been together, touring both the U.S. And China. Check out their Myspace page here for some more tunes that aren't riddled with obnoxious frequency overload.

The following examples are based on their various rock songs, and don't have any sort of complex nor harmonically rich instruments such as brass or orchestral strings. With that said, I think these examples work well to illustrate my point, and it is up to you to try these techniques on your musical production however instrumentally rich they are. 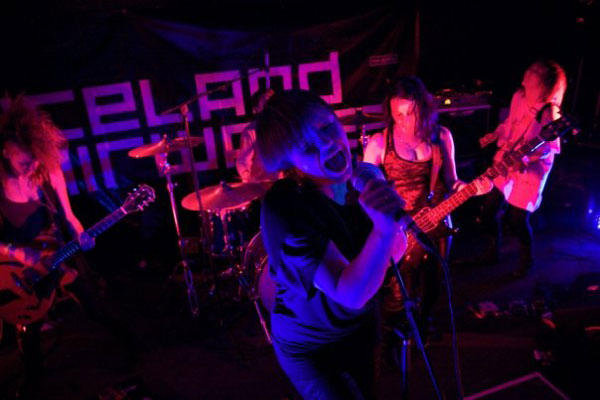 It becomes clearer when listening to music what the effect these frequencies have, and which instruments dominate one octave more than others. I'm skipping 31Hz since it doesn't have a real noticeable effect on the music. It adds a tiny bit to the deep low end, but that's about it.

Let's hear how 63Hz changes the deep low end of the song. In the example below I switch on the EQ after the first few bars, and you can definitely hear the throbbing bass and kick drum getting more powerful. And of course, way too loud and out of place.

Like I suggested before, 125Hz gives more weight and punch to the track. In the audio example you can hear how the resonance of the kick and the punch of the bass gets stronger when this frequency is boosted.

250Hz is generally regarded as a good frequency area to boost if your guitars need more thickness. Too much can result in too much boominess and decreases the clarity of the sound of the rock guitar. You can clearly hear in the audio how the guitars get boomy and ill-defined with too much of this frequency. This frequency also has a weird effect on the snare, making it sound too boxy.

Sounds like something out of a cardboard box heard through a narrow tunnel! Notice how the snare hits get more powerful and the guitars have more punch? On a related note I also feel like with boosting this frequency we hear an overabundance of reverb as well. Maybe it's a combination of which instruments in the mix get the reverb treatment and therefore get enhanced as well with the boost. This frequency generally adds boxiness to drums but can also help bring out the vocal a little bit, like you can hear in the audio below.

You might recognize 1kHz better if I give you the sine wave example.

Ring a bell? This frequency as a sine wave is used in all sorts of acoustic tests and the sound from a signal-less TV set. It is a frequency that creates a telephone like sound to the voice and is gives kind of an obnoxious horn-like effect. Too much of a boost in this range, like in the example below can result in a thin and tinny sound. Even though we haven't filtered any low end out, it almost seems much thinner just by boosting this specific frequency.

When we've come so high up in the EQ spectrum we're not really affecting the fundamental frequencies of instruments anymore. Rather, we're boosting certain elements of the harmonic content that is present in said instruments. This is where the terminology gets slangy pretty fast, with brilliance, attack, presence and air playing an important role in communicating what we want from the EQ process. We accent the attack of drums and guitar by boosting in this range, but too much of a boost in this frequency area can quickly cause listening fatigue.

Listen to how this range increases the attack and bite of the guitars, not only when they are distorted, but also to how they sound sharper in the clean part.

The brilliance knob. I used a plug-in the other day whose sole purpose was to add a liberal amount of 8kHz to a signal, giving it more life and brilliance. It worked wonders on voices and as you can hear in the example below, a 8kHz boost definitely pulls the vocal closer to you. Too much in these areas all sound a little hissy at this point, due to the fact that I'm adding to all the instruments at once, but a gracious amount of 8kHz can bring a dull instrument to life and make it more....well brilliant.

This is the highest octave we can hear given these specific octave values. The next octave would become 32kHz and it is of course impossible to hear frequencies that high. A boost here doesn't affect the track as drastically as some of the other examples, but you can hear the added presence in the hi-hat for example. Last time I checked I could only hear up to 17.7kHz so there is not a lot of information there that seems to be accented, although we might have a different story if we have some sort of orchestral music instead of rock.

Now, there are a fair amount of frequencies between all these octaves that are also of interest to the average EQ'er. The click of a kick drum can normally be found at 2.5kHz, the sibilance of a vocal is around 7kHz and so forth.

As the frequencies get higher, the octave jumps get larger, so there are many areas between some of the octaves that have their specific uses. But by pointing out these frequency areas and giving examples on the inherent characteristics of these octave bands I hope to shed some light on the relationship they have with the music.

By realizing where specific sounds lie in the frequency spectrum you can hone in on problems more easily than randomly turning knobs and sliders in hope to stumble upon your problematic frequency.