How to Remake Soul Survivor by Young Jeezy and Akon

When rapper Young Jeezy went into the studio with Akon to create “Soul Survivor,” the concept behind the song was a dark one. Most evident in the music video (based on the Roc-A-Fella film “Paid In Full”), the song is essentially a story about life on the streets.

Thus, when Tha Bizness and DJ Toomp handled production for the song, they needed to create an instrumental that would live up to that feeling. In this tutorial, we’re going to break down just what made the song feel so dark, and also what sort of elements went into creating a #4 Billboard Hot 100 song.

Every few weeks, we revisit some of our reader's favorite posts from throughout the history of the site. This tutorial was first published in December of 2008.

Here's what we'll be creating:

As with previous tutorials, the best way to start is to break down each of the song’s elements, and start thinking about how it will be built back up. If you’re composing your own original work, then first sit down and think through your instrumentation.

In “Soul Survivor,” the primary elements are:

Surprisingly, of all the songs that I’ve remade so far, I was initially the farthest off tempo on this track. I knew that it was a bit of a slower, southern track, but on initial programming of the drums, I set the tempo at 96 BPM. When I added the ride cymbal in, the track sounded terrible so I had to reset the tempo. The final tempo that I stuck with is 83 BPM.

One of the trickier things with production is that the song tends to sound faster and faster as more elements are added. Regardless, here are the setup settings that I used:

Now, set up the track as always, by going to Create > MClass Mastering Suite Combi, and Create > Mixer 14:2.

Next, it’s onto the drum set up. Go to Create > Redrum Drum Computer. Load up Drums.drp (and make sure the individual samples are loaded as well, there should be three). I made some adjustments to the patches to make them sound more like the song, which are viewable by loading the Drums patch and then just looking at the knobs that were adjusted.

However, another important addition still needs to be made, so let’s keep working. With your drum machine selected, go to Create > RV7000 Advanced Reverb. Now, we just put this reverb on all our drums, but we only want it on our kick drum, so we have to make some changes.

To sum up what we just did, we created an RV7000 Reverb. Redrum’s channels were automatically routed through the RV7000, which added reverb to all channels. However, we only wanted reverb on the drums, so we rerouted Redrum’s output back to the Mixer (how it was originally), and then selected only our kick channel to go through the Reverb.

Next, load up the AllWarmPlate.rv7 patch to apply the proper settings to the RV7000 Reverb. 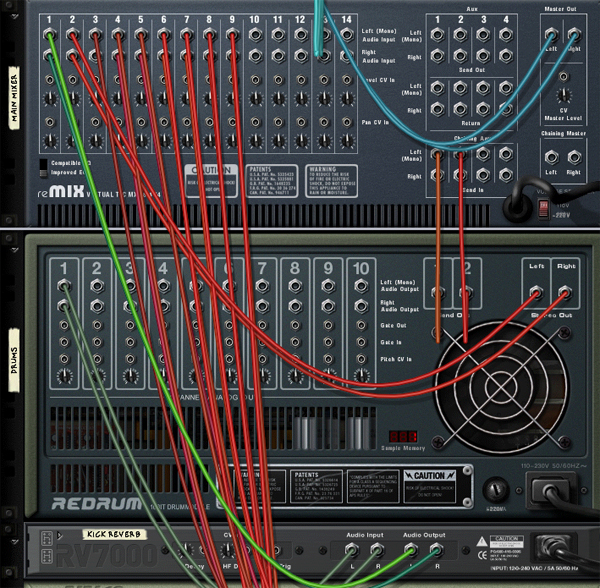 That’s probably one of the hardest parts of the tutorial, so now that we’ve got that out of the way, let’s set up our drum patterns. There are 3 patterns used in this tutorial, but each builds on the next. Set the length to 32 steps, and the resolution to 1/32.

There are two parts of strings that are needed here.

The intro is a common feature of songs that involve Konvict Music artists. It is presumably a ‘trademark style’ and it makes it relatively easy to identify Konvict songs. It usually involves strings, though there are tracks that use piano (“Change Up” by Fabolous & Akon, or “I Tried” by Bone-Thugz-N-Harmony would be examples).

Go to Create > NN-19 Sampler, and load up the BigStringsThin.smp patch. I don’t believe I made any changes to the sound patch, although I might have tweaked the sustain. Regardless, now play the melody below. 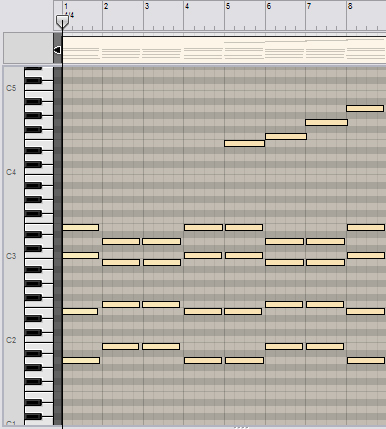 Now, using the same patch, let’s play the melody strings. It’s an orchestra “stab” feel, but this patch will work fine to emulate it. Play the melody line below, but make sure to keep the note velocity close to standard. Some human error is good, but if the sound is getting constantly louder or softer, it will be noticeable. 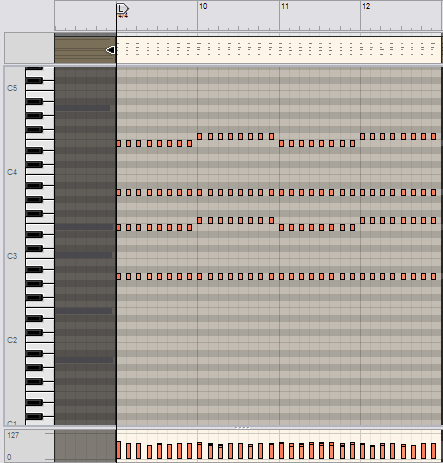 Alright, it’s now time to add the bells. This is the element that makes the song have a dark, melodic feel.
Go to Create > Subtractor Analog Synthesizer, and load up DreamVibes.zyp. Now, I made edits to the patch to make the bell sound more like the song. The bell needed a little less sustain, and a little more release, so I edited the Mod, Filter and Amp Envelopes accordingly. Play the rather simple melody seen below. 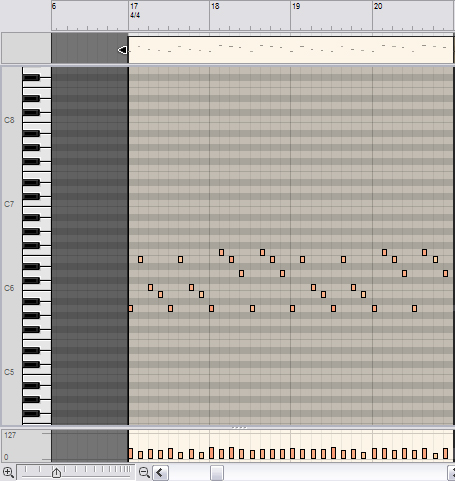 Play the one note line seen below. Note that it goes partially into the following clip, but that’s how it gets the ‘rolling’ feel to it. 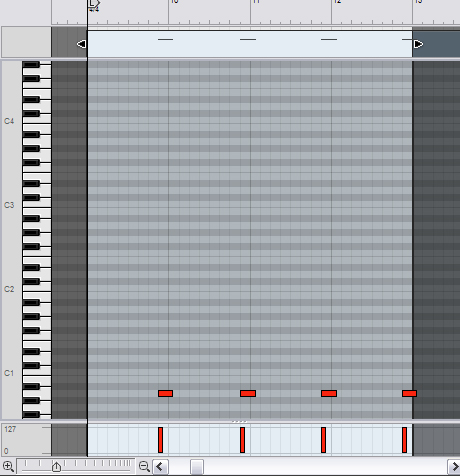 For the brass, there are three parts that need to be completed.

Let’s start with the brass on the verses (since the patch that it uses is also used for the lower chorus brass).
Go to Create >NN-XT Advanced Sampler, and load up Low Brass Section.sxt.

The way that this patch was created was by starting with the Brass Section stock patch from Reason.

Then, clicking the little arrow by “Remote Editor” allowed editing of the section. 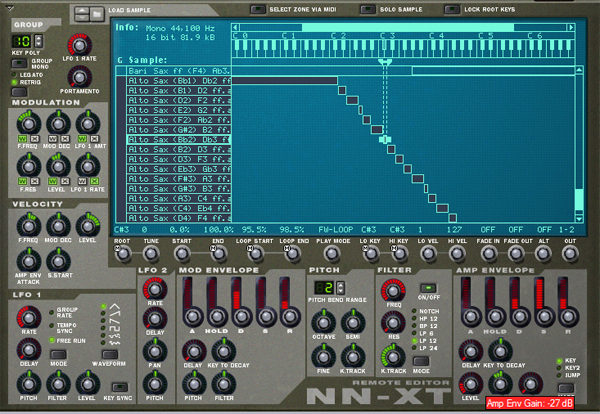 I lowered the Amp Envelope Level (see right hand corner), for the alto and baritone sax. When I created the Upper Brass, I raised the trumpet level.

With that aside, let’s create the two sections for the lower brass. The first is just a little small section for the verses, seen below. 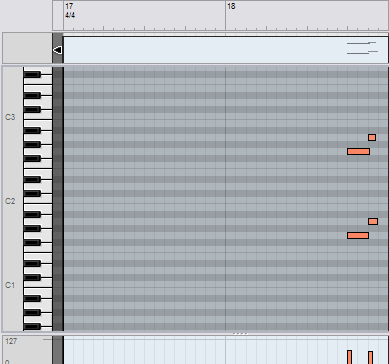 That is just the part that goes on the verses. Now, we’ll move onto creating the brass for the chorus. Using the same patch we already had loaded up, play the notes below. This section is pretty complex from a musical standpoint, and it will probably take a few attempts to get correctly. 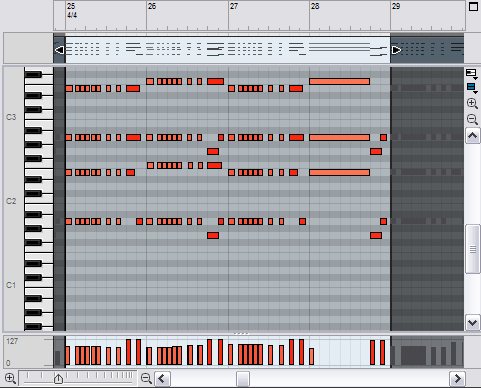 Okay, now we need to do the higher brass. Create another NN-XT sampler by going to Create > NN-XT Advanced Sampler and load up the Upper Brass Section.sxt. Now, play the section seen below. 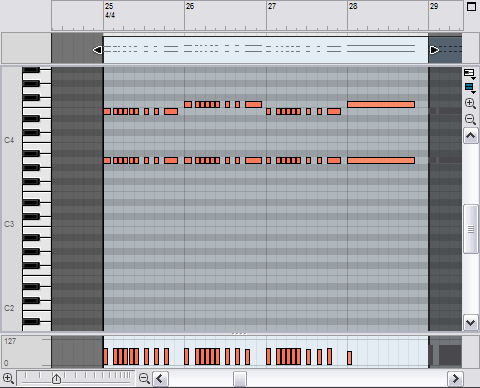 Next up are the pizzicato strings. They are hardly noticeable in the final instrumental, but they add a little flavor to the song. Let’s start by creating two new NN-XT Samplers. In one, load up VCS Pizz.sxt, and in the other, load up VLN Pizz.sxt. One is a cello pizzicato, the other a violin pizzicato. Play the notes below for both instruments. 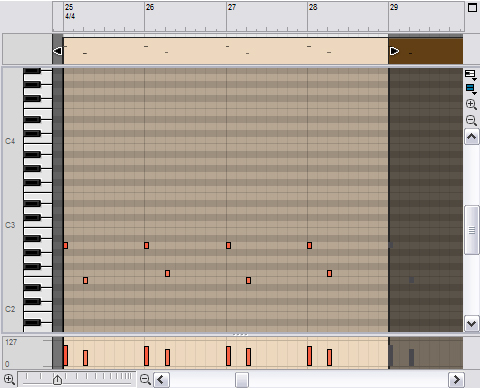 Now, it’s time to set up the final track. Each section we created above is simply layered on top of each other.
What we need to do is expand the track and set up the layout of the song. This is accomplished by listening through the original instrumental, and listening to the song structure and form. Here’s what the first two verses and choruses look like. 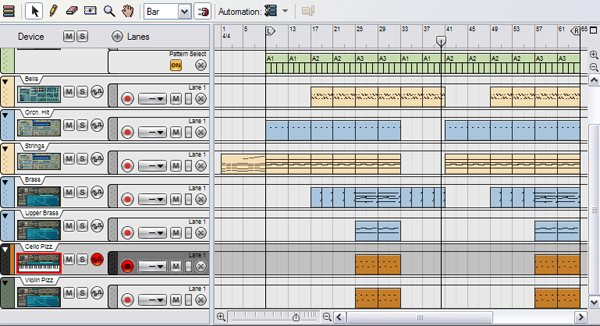 Well, here’s the finished product of the third installment in the track remake series. Hopefully everyone learned something from this tutorial. All sounds and patches are included in the tutorial Play Pack.

You can hear the final product again here:

Please spread the tutorial to anyone who you think will gain something from it, and leave a comment if you enjoyed it. Also, if you have a request for a song that you’d like to see remade, let me know in the comments.

Special thanks to my friend Evan Warner for helping replay some of the sections of this song, and for listening to my endless rambling about sound selection.