How to Sample Your Favorite Songs Using Reason and ReCycle

Have you ever been listening to a song and realized "Hey, I've heard part of this before!". What you discovered is called "sampling", a process by which part of a song, or a sound, is captured and played back to create a new song.

In this tutorial I will show you what you need in order to begin sampling, and some of the techniques the professionals use. Lastly, I will walk you through the creation of a famous Billboard Hot 100 song. We'll be using Reason and ReCycle for this one, but the principles could be adapted to any DAW.

So what constitutes a good sample? Well, most importantly, the sample should reflect your personal tastes. Choose one of your favorite genres, and start thinking about the songs you really like. Try to think of a 5-20 second clip that would sound interesting if played back or looped in various ways.

When sampling, you need to take into account the current audio, and try to work within those bounds. For example, if it has drums, you're going to have to take that into account. The best way to work around drums is to drop the EQ on the low-end, muting the drums at least a little bit so that they aren't prominent in the sample. Then, when you incorporate the sample into your work, playback your drums over the top to draw even more attention away from the muted sample drums.

Another common issue with samples is vocals. Your best bet is to try to search the internet for an instrumental of the song you want to sample. However, using vocals in your samples can actually work out to your advantage. It provides a common theme, which is useful for songwriters, and it often helps seperate the chorus from the verses. A very famous artist who makes excellent use of samples with vocals is Kanye West, famous for songs like Stronger, which is sampled from Daft Punk's Harder, Better, Faster, Stronger.

Hopefully this gives you some ideas you can use for samples. The only limit to sampling is your imagination. Let's move on to the actual process.

The first things you will need are a loop editor and a playback program. There are endless possibilities for you to choose from, but for the purposes of this tutorial, I will be using Propellerhead's Reason 4.0 and Recycle.

Let's get started. We need a song to sample, so following the rules from above, choose a song that has a sample you're going to want to use. In this tutorial, I'm going to be using a sample from the song Born on Halloween by Blue Magic. Don't worry if you don't have the song, as the concepts will be the same for any song you choose to use, but we've also included a .WAV version of the below audio in the Play Pack for this tut.

Open up ReCycle (or other loop editor). You should be prompted to select a file, but if not, simply go to File -> Open and select the source file that we will be sampling. Note that the source file must be in .wav or other acceptable format; mp3s do not work. 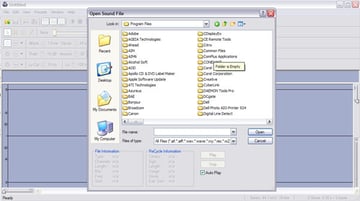 Now that our file is open, use the left and right locators at the bottom of the screen to select the portion of the song that you want to sample. Then go to Process -> Crop Loop, and it will remove everything but what you have selected. 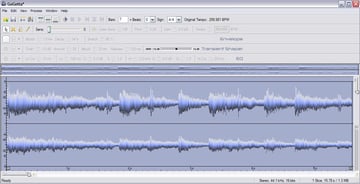 We're making good progress. Our next step is optional, but is quite useful in certain situations. What we're going to do is add slices to the audio file. It will keep the audio file intact, but will allow smaller parts to be played back seperately. Using the "Sensitivity Amount" tool, move the slider until slices begin to appear. You can play back each slice and hear it by simply clicking on it. You can also use the pencil tool to draw your own slices. 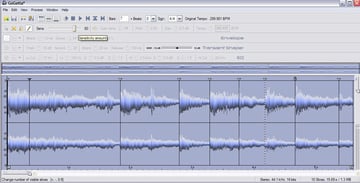 Now, let's do a quick trick to make our audio file really bang. Go to Process -> Normalize and select "Whole File". You should notice the transients become amplified. 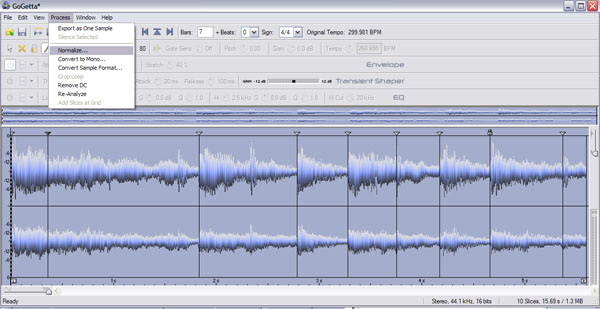 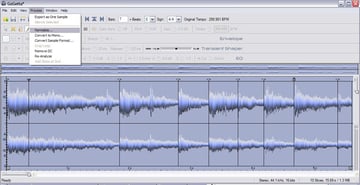 Time to export the file to a readable format for Reason. Go to File -> Save As, and name it. Make sure it saves as an .rx2 file, which is used by Reason's Dr. Rex player and NNXT Sampler, and allows the slices to be read. Take note of the tempo you save it at, as you will need this number later.

Now, open up Reason 4.0. I usually start with an M-Class Mastering Suite Combinator, followed a Mixer. To create these, go to Create -> M-Class Mastering Suite Combi, and Create -> Mixer 14:2. Once you have this set up, go to Create -> Dr. Rex Player (although NNXT sampler will work too). You now have a new instrument to work with. Open up your .rx2 sample that you saved from Recycle, and set your project tempo to the tempo you saved it at. You can select a different tempo, but there may be playback issues.

Click the "Preview" button in Dr. Rex, and listen to your sample playback. You can now add it to an already constructed song, or you can make a new song surrounding it by using the "To Track" button on the Dr. Rex player. Likewise, you can also use your MIDI controller to playback, as each slice will correspond to an individual slice in the sample, starting with the lowest key on your controller. 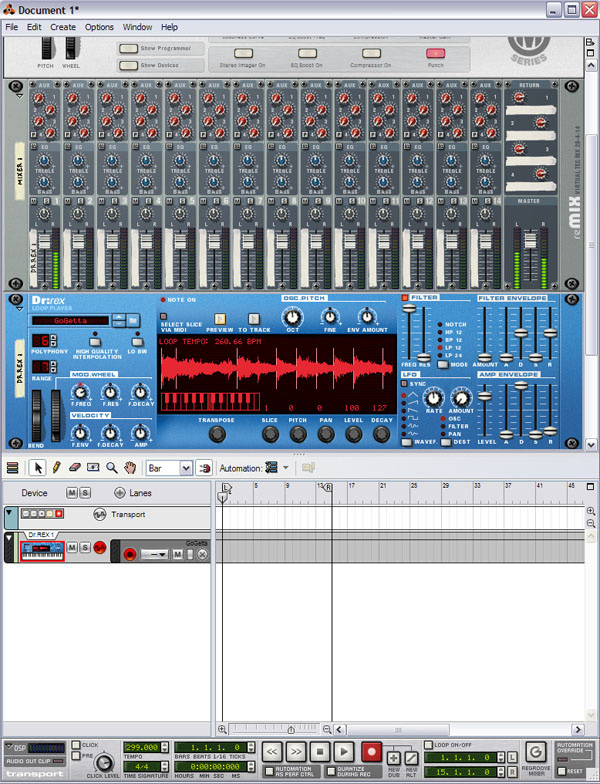 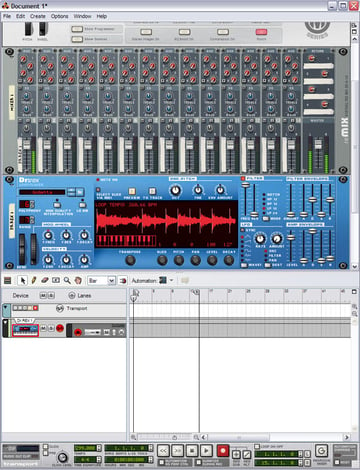 Unfortunately, Dr. Rex does not provide as many playback options as one would desire. To combat this, go to Create -> NN-XT Sampler. Use the open button to open up our sample. Then click the little arrow to the left of the "NN-XT Remote Editor" text to expand the remote editor, so we can actually edit our sample.

At first, the NN-XT sampler can seem a bit overwhelming, but don't panic. In the blue piano roll, it lays out each slice of the sample. Simply click the slice (or select multiple slices) to begin editing.

The knobs directly below the piano roll allow you to edit the slice's properties such as loop start, loop end, as well as other properties. However, the knobs you will find most useful is the LFO1 Pitch, Filter, Level and Delay (at the bottom left). You will also want to use the Mod Envelope Attack, Delay, Sustain, Release as well. These will allow you to directly edit the sound of your sample, allowing you to gain greater control over it.

There is such a thing as too much editing however, as going too far can distort your sample. As I said before, the only limit is your imagination, so feel free to tinker around. Just make sure you keep your original sample intact so you can reload it if you do take things too far.

If you used the sample that I did, listen to the final instrumental version of the song Go Getta by Young Jeezy and R. Kelly (produced by the Runners). You should notice the prominent sample used, the same one that I just walked you through how to create. All that was changed was the playback tempo, and the addition of drums.

One thing to note however, is that if you intend to use a sample in a commercial work, you need to clear the sample with the original owner. Do your research on ASCAP and clear the sample to avoid any legal troubles in the future. Hope you enjoyed this tutorial and learned something new!

Audio ProductionReason
Did you find this post useful?
Yes No
Would you like to provide feedback (optional)?
Cancel Submit
Want a weekly email summary?
Subscribe below and we’ll send you a weekly email summary of all new Music & Audio tutorials. Never miss out on learning about the next big thing.
Sign up

Eric Shafer
Eric Shafer is a unique hybrid of talents. A computer technology student and professional by trade, Eric also has a keen interest in graphic and web design, running his own blog, Presidia Creative. He also works extensively with music and professional audio, and has written several articles for AudioTUTS+ as well.
Looking for something to help kick start your next project?
Envato Market has a range of items for sale to help get you started.