How to Set Up Send/Return Effects in Logic Pro 9

For many audio writers, the basics of production sometimes seem so trivial that they’re overlooked as topics for sites like Audiotuts+. A piece on setting up send/return effects has been a request of readers for a while now, and today I’ll teach you how to create — and use — this handy method of routing audio through effects processors.

The name send/return came from the practice of sending a sound out from an amp, into an effect processor, and then back into the amp again before finally playing back through the speaker. Although the effected signal never really "returns" to the audio source (the audio track) in digital methods, the name has stuck.

Fire up Logic. I’ll be using Logic Pro 9, but this should work just fine in most other versions from the not-to-distant past. Create a new empty project, or you can open an existing one if you want to experiment with a work-in-progress.

Create a new audio track by navigating to the Track > New… menu option. 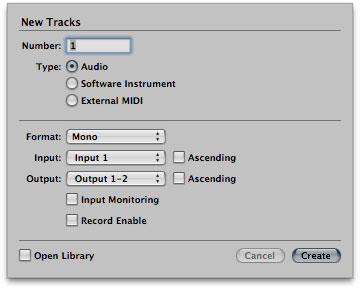 Once the track is ready, record or import some audio onto it.

Alternatively, you can pick an existing track with audio already in it, if you’re using an existing project.

Open the Mixer using the tabs at the bottom of the Arrange screen, and just above the Transport bar. We’re going to create what most audio workstations call an auxiliary track. The auxiliary track will receive audio from other tracks and send just the effected portion to the output of the track (usually the master or a submix).

Go to the Options menu — there’s one at the top of your screen and one in the Mixer, so make sure you use the Mixer’s Options menu. Select Create New Auxiliary Channel Strips. Generally speaking you should make it a stereo track (often things like delay plug-ins will take mono sounds and make them stereo). 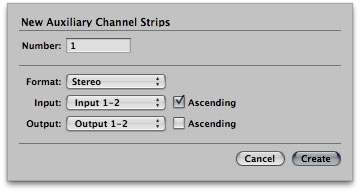 You should double-click the track label in the Mixer and rename it, so you don’t forget what it’s for. Complex projects with multiple send/return effects can get confusing!

The next step is to tell Logic which “pipe” to feed into the aux track. Busses are a lot like pipes that siphon a portion of audio from one track through to another. We can connect our outgoing sends and auxiliary inputs to different pipes, or busses.

You set the input bus by going to the I/O section of the auxiliary’s channel strip, clicking and holding on the lozenge that will generally by default say “Input 1-2”, and selecting a bus from the Bus sub-menu. In this example, I’ll choose bus 1.

It’s a good idea to jot down a basic list of the busses you’ll need to use regularly to route effects and keep it on your desk or on the screen while you’re working on a project. With multiple audio tracks to add effects to, it can be a pain to scroll back and forth trying to remember which one to use all the time.

Now that we’ve selected an input bus, we know that every time we send audio down that path, it’ll be received and effected by our auxiliary track.

Our aux track currently does absolutely nothing except receive audio! Let’s change that by adding an effect. You probably know how to do this, but for the few who don’t, create an insert on the auxiliary track — you can do this by clicking and holding on one of the empty Insert lozenges in the channel strip, and selecting the desired effect. This will also bring up the Insert settings, so you can configure it right away. You’ll no doubt come back to fine tune this once you’re listening to audio come through, but dial in the rough settings you’re after now.

Your aux strip should look like this by now:

Now it’s time to head back to your audio track. You should have some audio on it so you can check both the levels of effected audio and whether you’ve configured the effect to your liking.

Unlike the aux track, which has one fixed input, the audio track can send audio off to multiple busses. It will still go from the audio track to the master output — we’re just sending a certain level of the audio signal to be effected. If you’re looking to fully saturate some audio, then you need to place the insert directly on the audio track.

Below the Inserts section of the audio track’s channel strip is the Sends section. Click on one of the empty lozenges here and hold it until the menu comes up. Navigate to the Bus submenu and select the same bus number that you set the auxiliary track to. If you followed my advice and labeled the aux track, Logic will kindly append that label to the bus number your aux track is using.

To set the level of audio sent to the bus, click and drag on the circle next to the send. You don’t need to send a whole lot — around -15dB is a good starting point. At 0dB you’re sending just as much audio to the aux as you’re sending to the master outputs. Subtlety is generally best here.

Always ensure that you set the levels using the sends. Leave the aux track’s fader at 0dB at all times. It might seem more difficult to micromanage a whole bunch of send levels but by trying to control the volume of effects in your project with the aux fader you’ll only introduce mixing balance problems.

You’re now done creating your first send/return effect! The beauty of this system is that you can send multiple audio sources to the same effect processor, and you can repeat step 5 on as many tracks as you like. Your effects should be more cohesive, and save a heck of a lot of computer processing power since you don’t have to run inserts on every channel strip!