How to Slice Audio into Tempo-Fitted Loops

Hypothetical: you record a drum beat. The next week, you record a totally unrelated bass riff. The week after that you decide the beat and the bass would make the start of a great song together.

Problem: they’re out of time with each other, having been recorded in different tempos, but you don’t have the cash to go back into the studio and record one or the other, or both, again.

In this tutorial, we’ll use Propellerhead's Recycle

—though you should be able to follow along with your own preferred app—to reconcile the tempo of each loop, and shift the bass guitar’s pitch so that it’s in the right key.

I’ve used ReDrum to bang up a quick beat, and while I was in Reason I made a simple bass riff. The drumbeat’s original tempo is 120 BPM, while the bass has a tempo of 115 BPM.

If you want to program yours the same way, here’s how each looked in the piano roll. 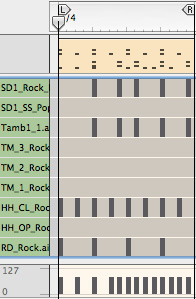 Listen to the drumbeat:

I then exported each as loops (File > Export Loop as Audio File). Obviously, with anything you program in Reason, you can change the tempo and pitch using the program itself. I’ve turned these into audio for the purposes of this tutorial, and the following is the process that you can use on any kind of audio recording.

Open the drum beat wave file in ReCycle. You’ll be asked if you wish to place the left locator at the first slice, and you should answer yes, unless you’ve programmed a beat where the first count is silent, which is rare. If that’s the case, you’ll need to manually place the left locator at the start of the beat and press play and test that it loops smoothly. Continue to adjust the locator until the beat plays smoothly on loop.

Once the beat is playing correctly, the first thing you’ve got to do is tell ReCycle how many bars and beats the sound file is made up of. The drumbeat was one bar long, so in the field near the top of the window called Bars, enter 1.

Based on that information, ReCycle calculates the tempo – 120 BPM. Now, we need to dial up the sensitivity (Sens: on the second toolbar) so that ReCycle starts deciding where the slices need to go. With the drumbeat, I found a sensitivity of 60 picked up all the hits. 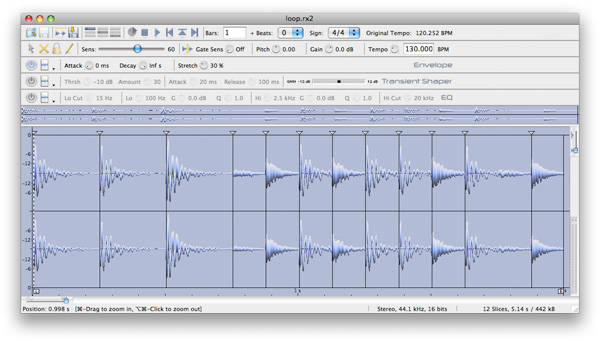 I found that ReCycle was playing the loop back with an ever-so-slight clipping noise at the start of each slice, so I increased the Attack dial on the third toolbar up to 1.0 millisecond.

So, we want our new song to play at 130 BPM – and the drumbeat is 120 BPM, so dial the Tempo on the second toolbar up to 130 and test that the file still plays smoothly on loop—if not, then you’ll need to play with the sensitivity until it does.

Now, go to File > Save As and save the loop as a REX (.rx2) file. You’ve successfully created your first loop.

Time to load the bass audio into ReCycle. Again, enter in the bars and beats (this time it was two bars long) and check that it loops smoothly before making any changes. The bass riff needs a sensitivity of about 72 to pick up all the note hits.

You might not have heard the clipping at the start of each slice in the drumbeat, but if you’re using the same bass audio as me, you’ll definitely hear it this time. When the loop is playing you’ll hear a distinct ‘pop’ everywhere there’s a line on the waveform indicating a slice.

I’ve included an audio sample of this, because it’s important to hear it when it’s obvious, in order to hear it when it’s so subtle that the average listener wouldn’t pick up on it. That’s not to say that you can ignore it when it’s subtle—people will be able to tell something’s wrong, just not what exactly the problem is. This is what it sounds like:

Not pleasant at all! Play with the Attack dial until the clicking and popping is smoothed out. I smoothed it out at around 7 milliseconds, but if you’re using your own audio for this tutorial, you’ll need to find a spot that works for your file.

Save the bass as a REX file just as you did with the drumbeat.

Open your DAW of choice. I’m using Logic for this tutorial. Once you’ve got a new project with two mono audio tracks, find the drumbeat loop file and drag it onto the first track. You’ll see a screen like this one:

Select Crossfade as your fix and hit OK.

Your loop should now be taking up one bar in your first audio track. We want it to loop a few times, so hover your mouse over the upper right corner of the drumbeat until you see a “loop” icon next to the cursor, and then click and drag it across so it takes up four bars. 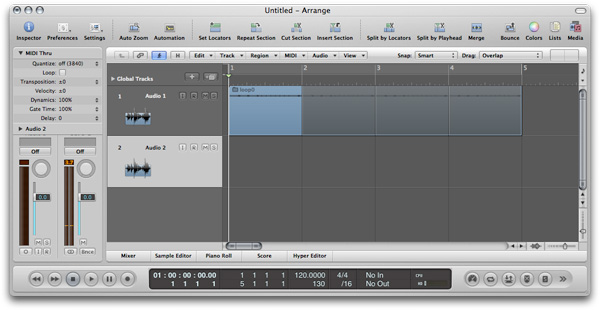 Now, drag and drop your bass loop into the second audio track. It’ll take up two bars, and despite the fact it was recorded at 115 BPM, it now plays perfectly in time with the drums! This is because we set the slices and exported it as a loop that can scale in tempo. In this case, it’s using the Logic session’s tempo to tell it how fast to go.

Drag the bass loop across using the loop tool just like we did with the drumbeat, so it takes up four bars in total.

It was pretty cool to see the bass and drums automatically line up their timing despite having been recorded in different tempos, but the next part is the coolest part. We wanted a song in 130 BPM, not 120 or 115 – so set Logic’s tempo, which is down in the Transport bar, to 130.

Play the session back, and if you’ve done everything correctly you’ll hear the instruments playing in time at a pretty fast tempo. If you know any old-school engineers who still use tape, mentioning this kind of ‘magic’ digital manipulation will get them on the soapbox, so be careful what you say!