How to Take Charge of Your Unruly Reverb

Reverb's a fun thing to fool around with. It's a really important processor while mixing, but it can easily clutter your stuff up. Reverb can get in the way of your emphatic vocal performance, your rocking guitar riff or your juicy bass sound.

Some people don't like using it at all and prefer delay. Preferences aside, it's important to know what you can do with it.

Sometimes it can add a little too much space to your mix. Every once in a while reverb can get in the way of your tracks, and when that happens, it's good to know a few different techniques for fixing that mess of space it can create.

In the following tutorial we'll be looking at a few ways to take charge of your reverb. Using less reverb is always an option, but sometimes you can use other tricks to make your reverb blend in a little better.

I'm going to assume that you know the basics of reverb, but if you don't, check out my tutorial How the Hell do I Use Reverb Anyway?!? for a quick primer. 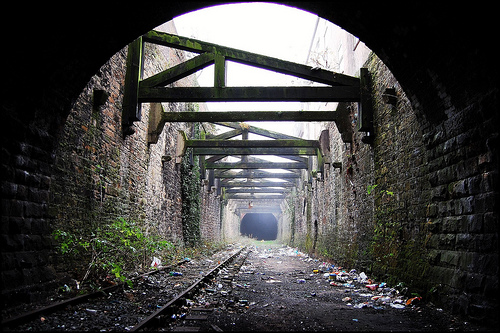 The infamous gated reverb from the 80s is a familiar sound. Take a listen to Prince's “Purple Rain” and you'll hear a great example on the snare. It's basically a way to get a big reverb sound without cluttering up your mix with the long decay and tail those big reverb sounds usually have.

In case you don't know how to make a gated reverb, here are the steps:

The gate works like a tail cut-off. By side-chaining it to your track, it only plays when the snare hit plays, and for as long as you want, dictated by your settings with the gate.

For some additional reading on gates, check out Mo Volans's How to Use Gate Plug-ins Effectively.

Try it with slower songs that have rhythmic vocals. You'll suppress the reverb so that it doesn't clutter the phrasings of the singer, but the reverb will fill in the gap between phrases when the compressor stops working.

For an even crazier effect, try adding some modulation or delay before the compressor. Or have multiple sends with multiple effects that are all side-chain compressed.

If you want one trick to take home that will make your reverbs sound infinitely better immediately, then keep reading. EQing your reverbs is one of the best ways to control them. It really shouldn't come as a surprise because EQ is one of the best tools you have in your plug-in arsenal, but I'm amazed at how many people don't even try EQing their reverb sends.

Filtering out the low frequencies of a reverb can instantly declutter the low end and take away all the muddiness and boominess that you've been experiencing. Sometimes the actual instruments don't sound really muddy, but combined with a large reverb, the low-end quickly builds up. By just filtering out the low-end you can instantly get cleaner mixes.

Similarly, vocals can sound too sibilant or guitars too harsh if there's too much high-end reverb. If your vocals or guitar sound too bright, maybe it's just a matter of lightly EQing out the high-end.

If you have a reverb that's bright and bouncy, the diffusion parameter can sometimes help even it out. Diffusion creates more “liveness.” If a reverb sounds “slappy” and you feel like the reverb is bouncing around too fast, diffusion defuses the slap-backs. So now, instead of a small room reverb that would otherwise create a very short slap-back reverb, you'll have a more controlled live-sounding reverb. It will sound just as short, but it will be less aggressive.

Adding pre-delay to a reverb often helps distance the original track from the reverb. It creates a separation between the two that's very desirable sometimes. You don't want the reverb to drown our your vocal part, so a bit of pre-delay will distance the reverb from the vocal. If you can imagine yourself in a room with four walls, pre-delay takes those walls and moves them further out so that the reflections return later.

It's great for vocals, and also for a variety of instrument that need spacious reverb but also need space from the reverb.

Using reverb effectively means a hell of a lot more than just inserting it on an aux bus and finding a nice sounding preset. Sure, that can sound good sometimes, but you usually need to tweak your reverbs to make them work in your sessions.

EQ is an invaluable tool for sculpting your reverb, and one I use almost every time. Side-chaining can also give you great results and dynamics in your reverbs, whether you use compression or gating. Finally, diffusion can create live-ness from aggressive reverbs and pre-delay can add some space between your reverb and your track.

All these tricks have multiple uses. Have you used any of these tricks? On what? Share it with us in the comments!