How to Transform Vocal Samples Into Percussion Effects

If you're looking for some slightly unusual percussion sounds to spice up your tracks a little, then you might do worse than looking at vocal samples or recordings you may have your drive. Although vocals might not be the first thing you think of when it comes to percussion with the right approach they can be transformed into sounds that can really compliment your main drum track.

This tutorial will take a step by step look at one example of how vocals could be used as percussion. I'm using Logic but you could use any DAW for this, that aspect really isn't important and obviously this is only one possible outcome, depending on the source material and the edits performed the possibilities are virtually endless.

To save time and any complicated copyright issues I have put together a simple backing track. This back drop will be used to demonstrate the process of transforming our vocal phrases. In your case you will obviously be using one of your own tracks.

At this stage its a pretty good idea to have the very basic parts of your track playing. This way it's easier to hear what your doing and you get a better idea of any groove you are building. Extra parts can always be brought in later and the new vocal part edited to suit. 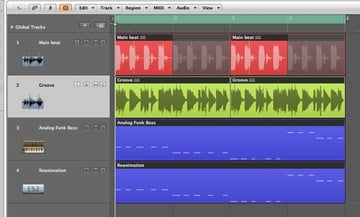 The basic track with no vocal sample.

At this point we need to start thinking about the raw material we're going to use. I like to start with a rhythmical vocal phrase, this makes the next few steps of the process much easier and tends to produce better results. Timed loops make things even more straightforward, so if you have access to sample CDs with Rex files or Apple loops, check the vocal sections.

Don't worry if you loops aren't tempo based, if you are working with uncompressed wavs or aiffs then these can be easily time-stretched in most DAWs to fit with your existing project. I won't go into too much detail here as the method varies pretty drastically from one application to another, but check your manuals and try it.

With your vocal in time it should work reasonably well with your current track. It's not essential that it sounds great but ideally it should be in time and in tune. If you can't find something thats in tune then use a non musical phrase. Spoken word or rapped samples work well and take away the concern for perfect tuning.

I have used a basic rapped sample here to avoid any tuning issues. When using this sort of sample you can be pretty sure any part of it will work as a percussion effect.

The vocal sample is added to the mix.

The basic uncut vocal sample in the mix.

The key to this technique is selecting the right parts of your vocal phrase and to do this we really need the vocal to be cut into its separate components. I'm obviously using audio here, I find this the best way to achieve the right sound but if you prefer you could use a Rex file in a software sampler and complete the edits using MIDI.

With your phrase in place use your DAWs scissor or razor tool to split it into separate parts. You are really looking for major transient events. So each percussive syllable is cut into its own region. If you are not sure then zoom right in a and listen tot the sample a few times, by using a combination of your ears and the visual feedback you should be able to identify these separate sections.

With your vocal track cut into sections it should currently play back as normal. Make a copy of these parts and place them either on a new track or on the current track. Also save the project at this point, this will allow you to revert to this stage if you are unhappy with the edits you make in the next steps.

The vocal sample is cut into its separate components.

Now we can start to choose which sections of the vocal sample we'll use as our percussion effects. The parts that tend to work the best are those with the strongest transients. So look along the entire sample and pick out a few sections with a strong dynamic signature, these events are usually more percussive, louder or brighter in nature.

Quieter, more subtle sounds can also work but we'll look at these later. For now select all the parts you don't need and delete them. Don't worry about this drastic move, we have all the parts in the copy that we made in the previous section.

Your selected sounds will now be playing back in the order they were recorded but with gaps where you have removed unwanted sections. At this point the sequence might not be too exciting and the sounds will probably need a fair amount of work but the first part of the picture is complete.

The unwanted parts are discarded.

The cut up vocal in isolation.

It's now time to make some rhythmical sense of the sounds we have selected. Remember we are trying to create something that resembles a percussion part, as opposed to a vocal, so the order doesn't matter. It's more important that the pattern you create relates well to the rest of your track, especially the drums.

I find that a healthy mixture of off beat and on beat placement works pretty well. Also try shortening some of the sounds in certain places to create accents. Try double or triple repeats to create mini fills in your pattern. After a short time a groove should start to evolve and you should be on the way to creating a vocal percussion pattern.

The groove starts to evolve.

In this example I have kept things really simple, pretty much all the sounds were moved and a few were repeated. I also shortened a couple of the sounds to give them a little more impact.

The initial groove in the mix.

With your new pattern in place you can start to treat the sounds. I find that grabbing groups of sound that play well together and placing them on their own individual tracks, you can add effects and really enhance them. This really gives the sounds their own identity and adds depth to the pattern as a whole.

I took a few parts and placed them on a track with a bitcrusher and some delay, another sound resembling a high hat was also given its own track and treated with some high end EQ and reverb. In essence all you are doing is bringing out the natural characteristics of each sound.

The sounds are split on to separate tracks.

Some sounds are then treated with effects.

The separate tracks were then panned a little, mixed and fed into a group track. This gives you total control over the whole part and allows you to add further processing as needed. I kept things in line with some gentle limiting here. 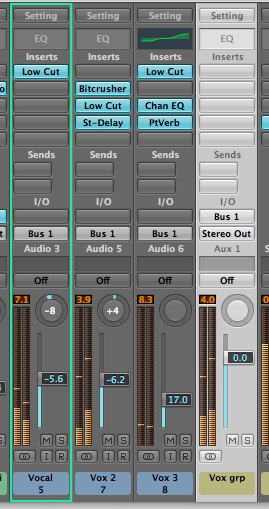 The various tracks are then all grouped for convenience.

The mixed and treated sounds on their own.

To finish your pattern off you can add some extra little touches and automation. I simply added a small roll made up of a part repeated over 16th notes. This was then faded in over half a bar and added to the end of each full sequence. It was placed on its own track and treated with some high pass filtering and delay.

A small roll is formulated.

The vocal roll effect in isolation.

Try adding pan information to some of your parts and even automate the effects you have used. If you plan to use delay or reverb extensively you may want to set up send and return channels to accommodate them.

You can see by the final clip that building a quick, percussive groove using just one vocal sample is pretty straight forward and it certainly adds a human edge to electronic productions. 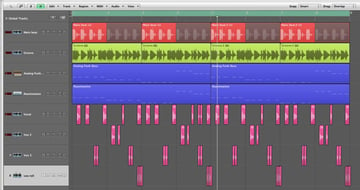 And the final mix.

The final pattern in the mix.