How to Turn Audio into Sampler Instrument Loops

When you're working with loops, particularly drum loops, to form the rhythmic basis of a composition, you often find yourself wishing you could do more to customize the track. Logic Pro 9 has a few tools that allow us to work with audio as if it were MIDI--such as the flex time features--but what about turning the audio into a MIDI-controlled sampler instrument track?

Open up Logic Pro 9 and set up a new project. It doesn't matter what kind of project template you use, as long as it has or you create an audio track.

Get some audio ready to work with--you might want to record an actual instrument, but I'm going to go the convenient route and use an audio loop from the library.

And here's how your window should look, more or less: 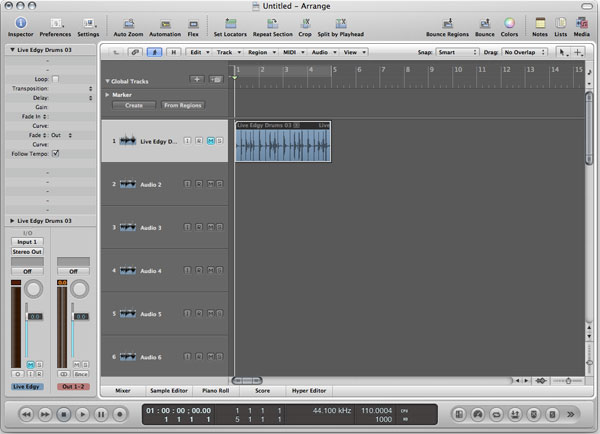 At this point you should make a selection as to what audio you want to use and cut it up into a region. Make sure your project tempo matches the audio you're using and cut it to the bar, as in 95% of situations you'll want to have a loopable sampler region.

To cut up regions, you'll need to use the scissors. You can turn this on by clicking one of the pointer tool menus above the main Arrange area and selecting Scissors Tool. The left menu sets your regular left click t00l and the right menu sets your Command+click tool. Here's what the menus look like:

I'm going to use the loop as is, since it's already cut to size.

Select the region you wish to convert and click on the menu option Audio > Convert Regions to New Sampler Trick (or hit Ctrl+E). You'll see a dialogue box like this one: 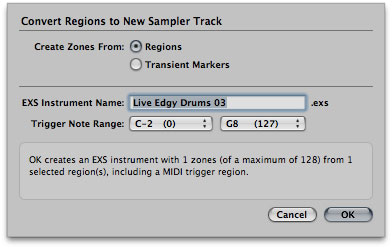 Select Transient Markers instead of Region. Selecting Regions is useful if you have multiple regions and want the entirety of each region to be triggered by a key on your MIDI controller. Hit OK and watch as Logic creates a new track with a green region filled with little lines: 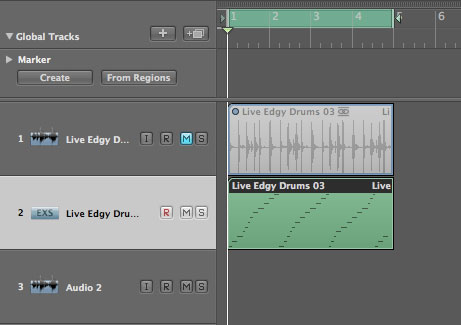 Your old audio track was automatically muted, and you can give the new region a listen to make sure everything went as planned (if it didn't, you will have to backtrack and see what you did wrong).

All audio should sound the same in terms of timing at this stage, even if Logic has cut it up incorrectly, because the slices are lined up in exactly the same way they were as a cohesive unit. If your audio file doesn't suit being manipulated in this way you won't know it until you start changing things.

For your comparison, the output of the conversion:

At this stage you can customize the MIDI any way you see fit. You can move the notes around manually, and you can record new ones through your MIDI controller, essentially having turned your audio into an instrument of its own. There are a whole slew of things you can do with the MIDI data now, but you'll also find out whether Logic was able to slice it up effectively. For example, if the audio sounds stuttered when you quantize to a very minute level like 1/64th, you probably won't have much luck doing anything with it.

Fortunately, my loop is easily manipulated. I can quantize it to 1/16th to give it a rhythmically tighter feel, and chuck on a bit of gating to make it punchier (if not quite 80s), all using the channel strip Inspector: 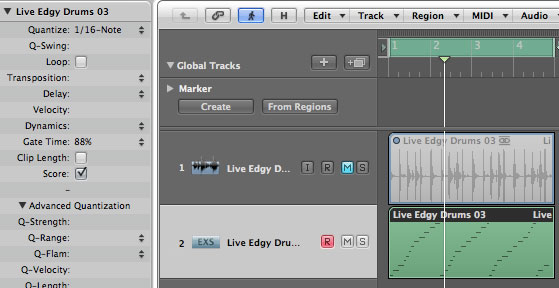 Or you can create an entirely new feel. All I've done here is removed the gating and changed the quantization to 1/12--all very simple changes, but it sounds like a totally different loop:

Earlier on you cut a loopable region to convert. This region should be reasonably long to give you room to experiment with; you may change the quantization or time signature in a way that uses more notes in less time, for example, and if you cut the initial loop down to the bare minimum, you may find yourself without enough notes. Now that I've experimented and come up with the sound I want, I like to create a loop or a group of loops in the smallest feasible building block size.

I do this because I may want to throw in a loop in a two bar section and be stuck with a four bar loop. Not a huge problem, but certainly a workflow inconvenience.

I've cut this loop down to one bar and repeated it, instead of having a longer region that's less wieldy. 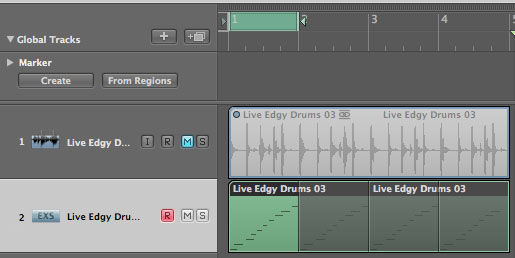