How to Use Gate Plug-ins Creatively

This tutorial will help you to stop looking at your gate plug-ins as boring noise removal tools and get you using them as creative tools and effects.

I'll walk through a few examples of how gates can be used this way using various DAWs. Even if your software isn't featured here don't worry, these techniques are generic and can be translated to pretty much any gate plug-in.

As most of you are probably aware the primary use for a gate is to reduce noise and any unwanted signal that is present in your recordings. For example you may have a vocal take with rumble, computer noise or heavy breathing in between phrases. A gate is the perfect tool for removing these problem areas, often with zero impact on the parts you want to keep.

As a gate is really just an automated level control they use very little to no CPU to run. Most DAWs include one or even two gates as standard and these will often be bundled with a number of pre-sets to get you going.

As the process of gating isn't particularly exciting and is often seen as purely a problem solving exercise, the gate can be somewhat overlooked as a creative effect. Let's run through a few examples of how we can think out side the box, from a simple alternative use for our gate to something a little more special.

First up let's take a look at using our gates in an almost traditional way, but instead of reducing we'll try using it in a similar way to a transient designer. This basically means that we can actually remove parts of a drum track or loop. This can be really useful for cleaning up our overall sound.

Let's start by choosing a loop with a fair bit of noise present. Here I have chosen a .rex file for speed but of course this technique can quite easily be applied to a drum group / buss and will work equally well on acoustic drums as it does on electronic sounds.

As the loop has been loaded in Cubase 5 I have used the standard, bundled Steinberg Gate plug-in. I have started by initialising the plug-in so that no gating takes place and no signal can be heard, this is a good starting point and is often the best way to go when using dynamics processors in general.

The next step is to bring the gates threshold control down until you can hear the peaks of the loop come through. In this case the first peak to show its head is the top of the kick and snare. Keep pushing the threshold until the majority of these major elements are playing but the other sounds are still gated.

The gates threshold being altered

Although we can filtered out many of the sounds in the loop, to make the remaining sounds a little more realistic we have to alter the release and hold times. When doing this try to mimic the actual release times of the drum sounds themselves. In doing this you may get some 'bleed' from the other sounds in the loop but this is to be expected and shouldn't be too obvious in the mix.

When comparing the before and after you should hear a dramatic change in the loop and using this technique you can slightly clean up your drum parts or completely transform them depending on the intensity of your settings.

Step 3 - Creating Your Own Gated Reverbs

Most fully featured, modern reverb plug-ins will contain some kind of gated reverb effect and they can work really well on short percussive sounds or drums. Although these presets can work well you can gain much more control over this effect if you can create it using your own processors.

In this example I'll use a single snare sound. You can hear that in it's dry form it's not particularly interesting and is maybe a little too dry. By adding a gated reverb we should be able to make the sound a lot more useable.

In this instance I have decided to load the sound up in Live 8 and because of this I am using Live's bundled gate and reverb plug-ins. Again this technique can be achieved using pretty much any reverb and gate combo.

The first thing I did was to add a pretty standard reverb patch to the snare. The decay is pretty long and although the sound is nice as an effect it would be far to long to use throughout a mix and robs quite a lot of the direct power and snap of the untreated dry version.

The snare with reverb:

So that we can achieve the effect and size of the reverb we need to add a gate to the end of the chain. With a super fast attack dialled in, you should be able to play with the threshold to allow the majority of the sound through. The reverb tail will be cut off and stop the sound from becoming to washed out.

At this point you'll want to play with the reverb mix, gate release and gain reduction amount. This will allow you to match the reverb time to the snares release and also ensure there are no unwanted clicks and pops introduced by the gating. You can hear that the result is a lively, stereo snare which will really find its own place in the mix.

One of the most creative ways to use your gate plug-ins is to produce rhythmical patterns with them. As a lot of DAWs now feature native side chaining, you can now feed your gate with just about any signal you like. This allows you to use the gate as a sort of automated tremolo or pattern generator. Some really excellent results can be achieved with a little imagination.

Moving over to Logic 9.02, I have loaded up instrument and percussion loops. I have used the more fully featured of Logic's two gates here as this will allow us a little more control over the finished sound.

The gate is placed on the instrument loop and the percussion loop is set to control the side chain circuit. This will allow us to use the peaks of the percussion pattern to activate the gating effect. Once this configuration is set up start to bring the threshold of the gate down until you hear some gating occur. 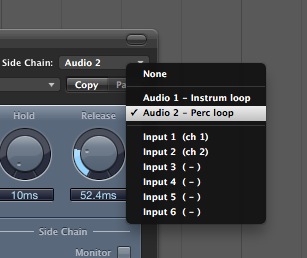 The mix with gating taking place:

Once the gating is taking place try sending the percussion to loop to 'no output' or a muted group. You should now hear the instrument loop with only the gated effect. This will allow you to make more exact adjustments to the gates settings. Of course you can always leave the percussion loop out of the mix and just use t as a trigger. if you prefer you can program your own trigger part using midi, this will allow a more personalised pattern to be produced. 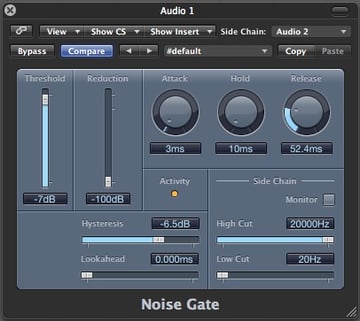 The gated loops in isolation: