How to Use Glitch Techniques

This tutorial is an overview of different glitch techniques to spice up your music, we will go over stutter, stretch, algorithmic cutting and other glitch editing techniques used to create complex effects simply.

For this tutorial we will be using Logic Pro, but the plug-ins we are going to be looking at are available for both Windows and Mac operating systems, so the information will still be relevant. We will look at four different plug-ins popular for glitch and learn how they process audio.

To install audio units (if no .dmg is provided) all you have to do is drag and drop the .component file, into a folder named components. The folder components can be found here: User-->Library-->Audio-->Plug-Ins-->Components.

First we will look at algorithmic beat slicing using LiveCut made by Smartelectronix, it is a free plug-in available for both mac and windows operating systems. Download it for free here: mdsp.smartelectronix.com/livecut.

Open a new project file, I am using an empty template to begin, create a new audio track, click on one of the empty insert boxes, and go down to audio units --> MDSP@Smartelectronix --> LiveCut. 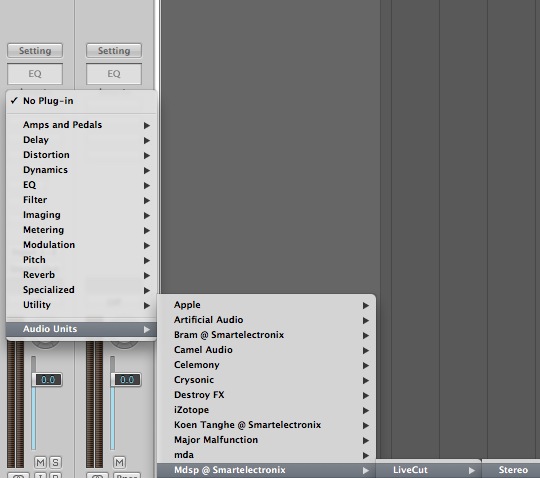 Pick any sound file you want and drop it onto the audio track, here I have used a 90bpm hip-hop drum loop, set the loop points and have a listen.

LiveCut has rearranged the loop automatically, how cool is that? There are different algorithms such as warp which emulates the non-linear glitch techniques made famous by the label of the same name, and a squarepusher algorithm which emulates how squarepusher chops up drum loops.

There is also an awesome effects section which can create some really interesting glitchy sounds, what I like to do is bounce down a section and take the parts from the loop I like and sequence the audio myself, as because it is random you have no control of the placement of the glitch.

Next we will look at algorithmic beat slicing using Super Trigger made by Bram@smartelectronix, it is a free plug-in available for both Mac and Windows operating systems. Download it for free here: www.smartelectronix.com/~bram/plugins.php?id=6.

We will continue to use the same loop for this example so all you need to change is the plug-in. Click on one of the insert boxes, and go down to audio units --> Bram@Smartelectronix --> SuperTrigger. 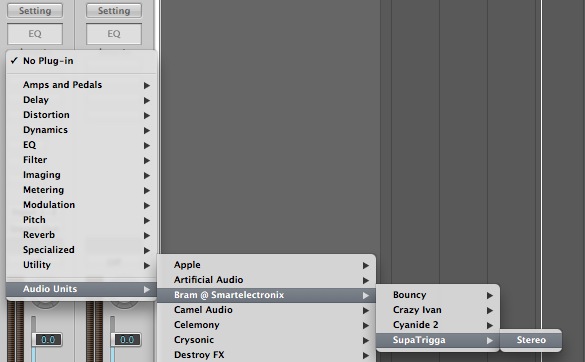 This is a very simple algorithmic cutter, but can be very useful to chop up drums and make fast alterations to your original loop. The tape stop effect is especially nice in this plug-in.

Again this is an algorithmic loop slicer, so to get the best results it is useful to bounce to audio and chop and take the segments you like to re-trigger in a fashion that suits you.

Next we will look at stutter techniques using BufferOverride made by Destroyfx, it is a free plug-in available for both mac and windows operating systems. Download it here: destroyfx.smartelectronix.com.

Load the plug-in, this may be a slightly different process if you are using something other than Logic. Click on one of the insert boxes, and go down to audio units --> Destroy Effects--> BufferOverride. 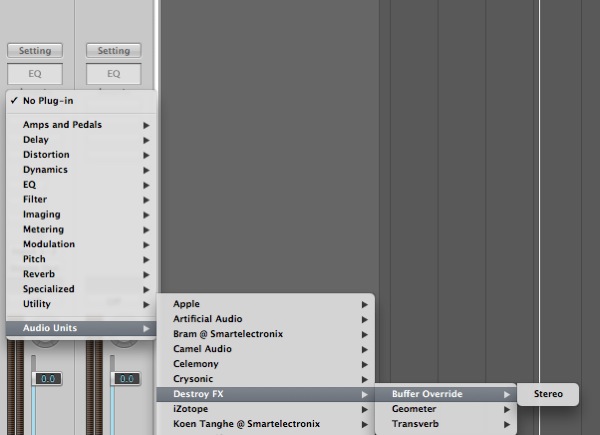 This is a very simple plug-in that can create some crazy sounds, there are two main controls on the front of the interface, buffer divisor and buffer size. Move the buffer divisor control and take a listen to the effect is has. 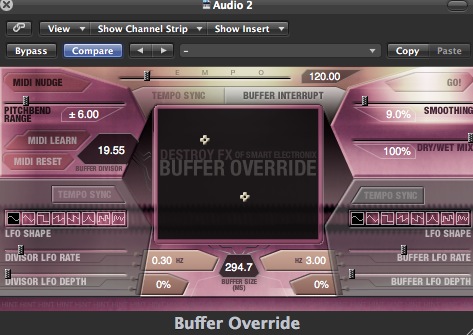 Pretty wild! This is a really useful plug-in for making quick glitch on, you can also hook the buffer divisor to be controlled by MIDI data such as a rotary knob on a keyboard using the MIDI learn function.

You can create a more tame effect by clicking the tempo sync button in the top left of the plug-in window, now the buffersize will change to buffers per beat, have a listen...

Next we will look at a rather complex plug-in called Effectrix. This is the only plug-in that you will have to pay for, but it is well worth it if you like your glitch effects. Again it is available for both Mac and Windows operating systems. You can find it here: www.sugar-bytes.de/content/products/Effectrix/index.php?lang=en.

First load the plug-in. Click on one of the insert boxes, and go down to audio units --> Sugar Bytes--> Effectrix.

This plug-in has many effects, but we will only be looking at a few, specifically the glitch effects available. The first one we will start with is the stretch effect, this is a very simple but powerful sound design tool, the effect has two main parameters: Time and Grainsize. Take the time parameter all the way down to zero and adjust the grainsize. 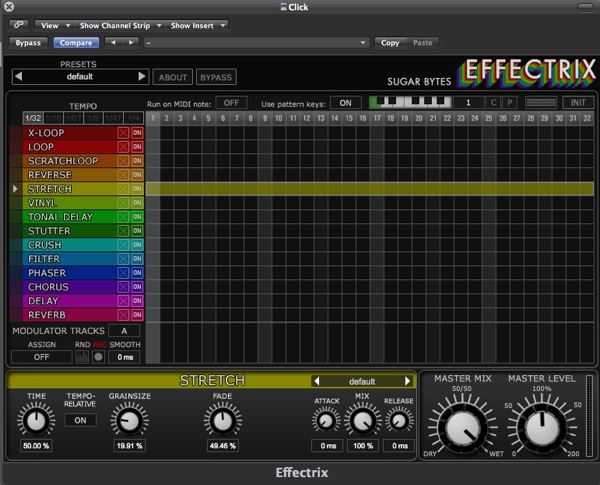 Recognise that effect anywhere? This is a lovely technique for create anything from a build-up or drop to ambient weirdness, I especially love putting vocals through it.

The next effect I will show you is the reverse function, this pretty self-explanatory but it is a very fast alternative to manually processing the audio.

The scratch function is a handy little tool useful for vinyl scratch type effects, it has five main parameters, that allow control over the forward and backward spin the slopes of the two respective spins, and the overall loop size of the scratch. 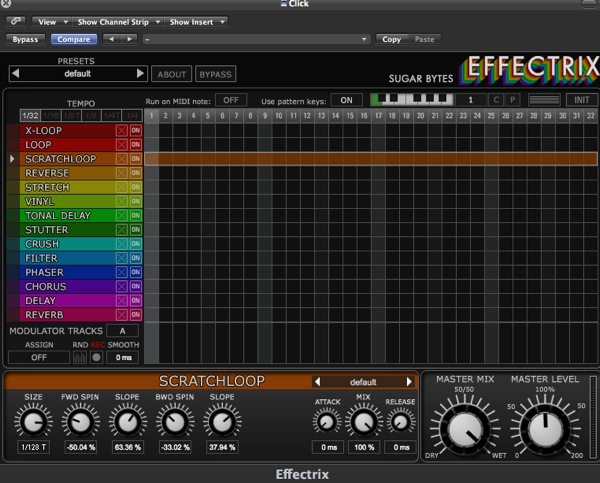 The loop function is very useful in producing fast stutter glitch effects, and all parameters in Effectrix can be modulated by the step sequencer below the main matrix of effects. Select the parameter you want to automate in the assign section of the modulator tracks, in this instance the size, and draw in how you want it to be effected over time.

The X-loop function is amazing for producing crazy build-ups or breakdown sounds. The X-loop function takes a loop of the audio you feed into it and can either speeds the loop up or slows the loop down. This effect is similar to modulating delay times on effects boxes such as the Roland space echo.

I suggest playing with these audio units for yourself, as the sounds covered here are just a starting point for your exploration into the exciting world of glitch.

Richard Carrigan
Richard Carrigan is a UK based underground digital music producer. Richard holds a BA Hons degree in Creative Music Technology, and is due to start a Masters course in Cambridge later this year. After he completed studying for his BA he now works for a renowned Acoustics company as an Acoustician. He develops both software and hardware for the creation of live electronic music, and has wowed crowds with innovative performances, which has led to increased interest in his unique talents.
Weekly email summary