How to Use Logic Pro 9's Drum Replacer

Drum replacement is a tool that comes in handy when recorded drums just won’t work with the rest of the track. Whether that’s because of a badly placed mic or the wrong kit was recorded, technology has made it easy to swap in some more appropriate samples while retaining the dynamic characteristics of the original recording. I’ve long wished that Logic would adopt drum replacement abilities like those Pro Tools has, and with Logic Pro 9 it did — and it does it much better, too.

I’ve started off by pulling a pretty bad snare skin recording into Logic. The mic has picked up a lot of cymbals and room noise, and to make things worse the tone of the snare is also terrible. Usually you’d mix your recorded drums and your replacement drums together, but in this case it’s safe to say that won’t be necessary. Have a listen:

Now that you’ve got the track in Logic, it’s time to look for a sample that works with the song. Don’t rush this or you may as well stick with the original recording! You may want to collect several as it can be hard to judge without listening to the sample in place. If you already have a collection of samples ready to be used in Logic, you can just audition those.

To audition these snares you’ll need to load them into EXS24 (which you can learn more about here).

Select the track you wish to drum replace and click on the menu option Track > Drum Replacement/Doubling. For a moment Logic will analyze all sound files on the selected track and then a settings window will appear. It looks like this by default: 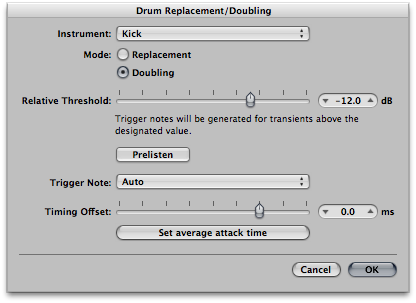 Now you need to dial in the basic settings. In this case, I’m changing the instrument to Snare, and the mode to Replacement. Doubling mode can also be used for replacement when you intend to mix the two sounds together — the only thing Replacement does differently is it mutes all regions on the old track once you’ve created the replacement track.

This is the fiddliest step in the process. You’ll see that a bunch of yellow lines appear across the audio once you open the Drum Replacement window. These lines are linked with the Relative Threshold setting. Relative threshold determines how loud the transients need to be before Drum Replacement recognizes them and adds a corresponding sample to the replacement track.

With well-isolated drum recordings, this part of the process can actually be pretty easy — just drag the slider to the right until yellow lines show up for all the drum hits, but not so far that the quiet hissy bits are included. But with a recording like the one you heard before, a bit of time needs to be spent on this step.

My biggest piece of advice here is a really simple one, and that’s to zoom in on your track like crazy. You want to be able to see clearly where the transients are and how much space is between them. It looks like you can see them when zoomed out, but it’s much easier to tell when 0.1dB to the left is too far when you can see all the transients up close and personal.

Now that you can see closely, play with the slider and get it so that most of the snare hits have a corresponding yellow line.

At this stage, some will no doubt be left out as you reach the “fine line” where there’s a struggle to include quieter hits without including background noise. I recommend manually adjusting the numeric value by 0.1 at a time rather than using the slider when you’re at this very picky stage of the process, because the slider tends to move in larger numbers than we want.

There will certainly be some snare hits left out. Bizarrely enough, I’ve seen the software continue to exclude certain hits that are visibly louder while including much quieter hi-hat hits. It’s very frustrating at times but the hits it has excluded have never been too important, so there must be some method to this madness.

You can see here that there’s one snare hit that’s been left out: 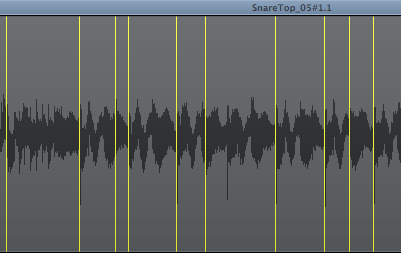 And once I jack up the threshold a bit, it’s still left out — but those hi-hat hits you can see in the first image are included: 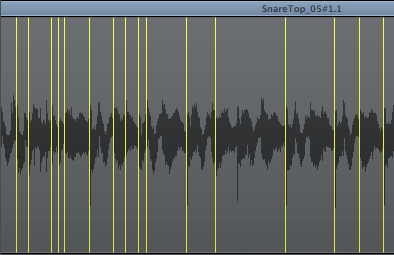 Step 6 is a prequel step telling you to isolate your damn microphones!

In this example I used Replacement mode because I didn’t want to mix between the two tracks as most engineers will do. You can reverse this if you want to mix the tracks — just right click on the muted regions in the original drum track and click Mute on/off.

At this point you’re happy with the threshold and with the sound of the new drum, so mix the two tracks together until you’ve got a happy medium of the more natural original, and the sampled snare. The reason they’re mixed is that the replacement track doesn’t capture the room’s response to the snare drum at all, and while it does use the amplitude of the original to designate the velocity of the replacement, no MIDI can beat the subtlety of dynamics in recorded music.

Step 8 - Listen to the Finished Product

Go back to Step 1 and listen to our original snare, and compare it to this:

The tone of the drum is better, the noise isn’t drowning out the snare itself, and the liveliness of the room that we’ve lost is retained by our overhead and room microphones. To show you the difference, here’s what our original drum track would sound like:

And here’s the same selection of drum recordings at the same levels, but with our replaced snare: