How to Use Multi-band Compression in Mixing and Mastering

Twice a month we revisit some of our reader favorite posts from throughout the history of Audiotuts+. This tutorial was first published in August 2009.

In some of my recent tutorials I have been breaking down the processors used in a typical mastering chain into individual subjects. So far we have looked at buss compression, M/S processing and stereo enhancement. In this tutorial we are going to look at multi-band compression.

Multi-band processors of any kind can reach into areas that their single-band counterparts just can’t touch. These processors are not just useful in mastering - they can be indispensable at the mix down stage, especially when treating drum and instrument groups.

Let’s have a look at some different multi-band compressors in action so we can get a better idea of how they work. The processors used in this tutorial in no way represent a definitive list of multi-band compressors, so your favorite plug-in may not be here. Feel free to share the alternatives with us.

Let’s take a look at a typical multi-band compressor and its controls. The precision multi-band compressor that runs on Universal Audio’s UAD platform is an excellent example of a mastering grade processor in this area. Don’t worry if you don’t have this particular plug-in, I am simply using this as an example. We’ll take a look at other products in the later stages.

At first glance you may notice that the plug-in’s central window is divided into four sections. These represent different areas of the overall frequency range. Most multi-band compressors work from 20 Hz - 20 kHz. The number of bands they use vary and often they can be added or deleted. The range which each band covers in most cases is also user-definable. 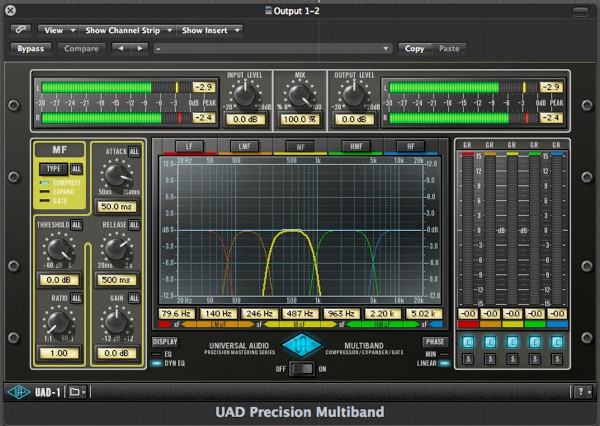 Each of these bands represents an individual compressor and has a full set of controls. All the usual suspects are here such as ratio, threshold, attack and release settings. With your frequency band set, your compressor will only act on the specified frequencies. This is really ideal for treating a particular instrument or problem frequency in your mix.

Metering is represented in many different ways here but most plug-ins will give you a clear idea of how much gain reduction is happening in each band. This allows you to judge what sort of processing is taking place with a quick glance. You will find this varies pretty drastically from one area of your mix to another, so choose a plug-in that gives you a clear readout. 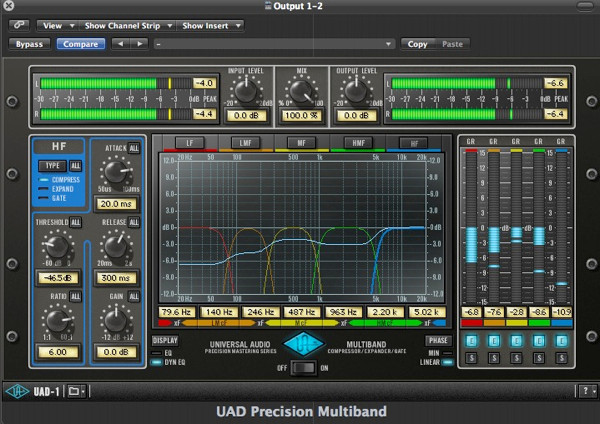 Multi-band compression isn’t specifically limited to use in mastering, but there’s no doubt this is where it's utilized most. The ability to home in on specific frequencies and treat them without coloring others is what sets multi-band processors apart from more basic single-band models.

With a decent multi-band compressor strapped across your DAW’s master output you will be able to tame subsonic frequencies, lower the level of problem percussion sounds, and bring rogue hi-hats and effects into line. All this can take place with varying amounts of compression, and each band can have different attack and release times, perfectly suited to the instrument in hand.

To home in on each area, solo each band and identify the area you want to treat. Now set the compression so that a few dB of gain reduction is taking place when the instruments in that area are at their loudest. If you repeat this with each frequency band you should introduce a good amount of control that simply wasn’t there before. 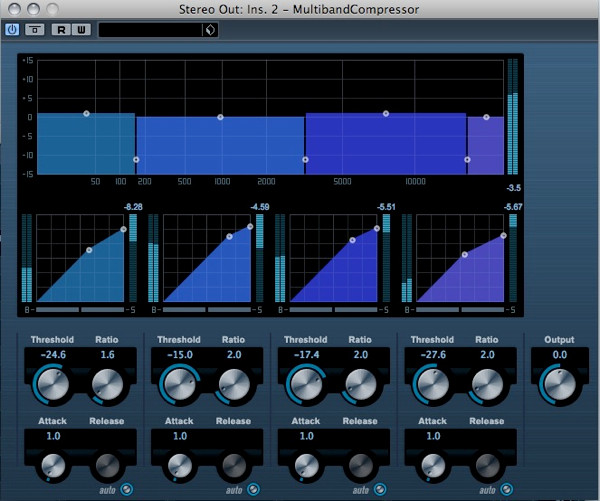 Cubase multi-band in action on various frequencies in a master

It’s worth remembering that when you're using any kind of compression on your final master, it's wise to aim for a ‘transparent’ result. This basically means you are aiming to solve any mix issues without it being apparent that there is any compression being applied.

This usually means opting for long attack and release times, low ratios and small amounts of gain reduction. If you find yourself having to use very heavy settings to get the desired effect, you may want to look at the original mix and make some changes. Of course, you may be looking for a very compressed sound as a creative effect, but this will be at the cost of your dynamic range.

Mix treated with only multi-band compression

Multi-band compressors can be just as useful in the mixing stage as they are in mastering. Obviously there is not a lot of point treating simple, monophonic sounds with a five-band processor, but groups of instruments can really benefit from this sort of compression.

With a multi-band compressor applied to your drum buss you can treat separate drums. Low- and mid-frequency drum parts can be attenuated without affecting any other area of your drum mix. This sort of treatment will also give your drum sound a cohesive quality that is often hard to achieve with a number of single-band compressors. 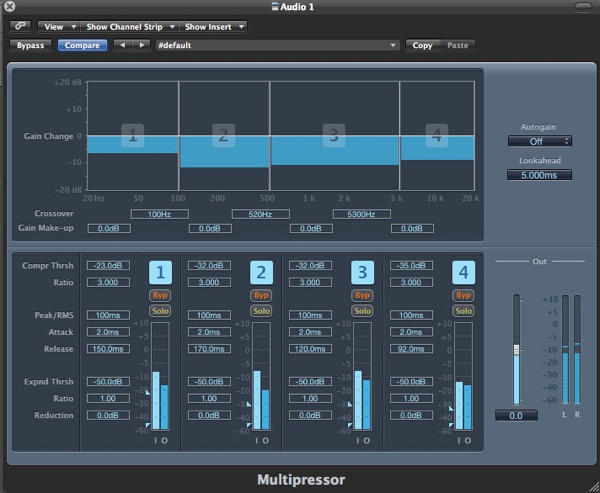 Logic's Multipressor doing its thing on a drum group

This technique is not just limited to drums, and can work with any number of grouped instruments such as guitars, vocals or even synth lines. As long as the contained sounds have a defined, unique frequency then the multi-band compressor will be able to clamp down on them.

Multi-band compression is also useful when a number of instruments have been bounced down to one track, where you have lost the ability to tweak individual settings. When using loops from sample libraries you should find this indispensable.

In the following audio example I have used multi-band compression to reduce the levels of the the bass drum and the snare on a basic drum loop. 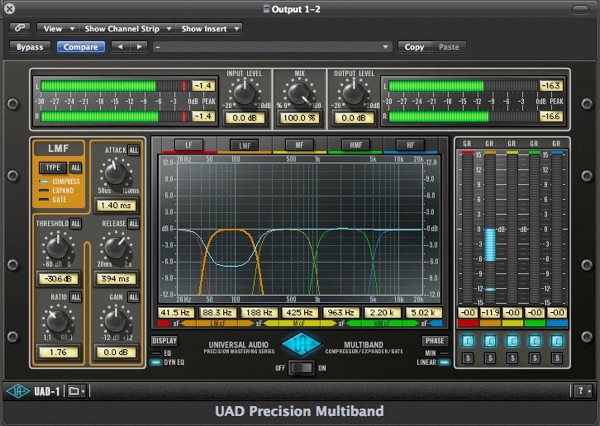 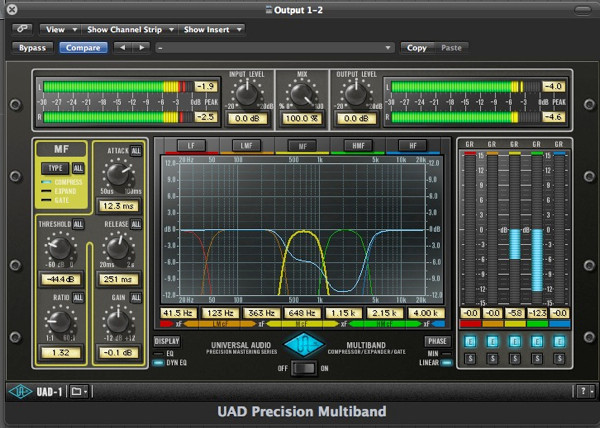 Most multi-band compressors also allow each band to be boosted in volume. This boosted area can then be compressed to bring it down to its original level as it fires. This mixture of amplification and attenuation is commonly known as dynamic equalization, and if the right balance is struck, can give you a really pleasing result. 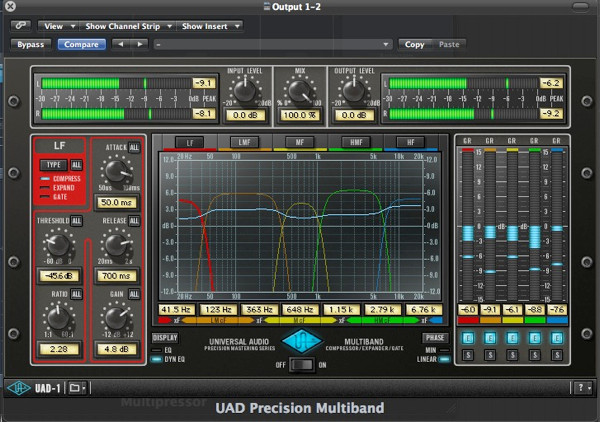 When this technique is employed areas of the mix that contain small amounts of the frequency band in question will be boosted and higher gain areas will be compressed. This results in a more even sound and can really open up a mix that is perhaps a little dull.

Multi-band compressors can be used for de-essing. Very high sibilant frequencies can be homed in on and compressed when present. This is essentially what happens in the majority of de-esser plug-ins, but this way you actually have more control over the end result.

These examples show that multi-band compressors can be used in a number of situations besides mastering. It’s well worth getting to grips with this technology.