How to Use Pitch Correction for Vocal Effects

Auto-tuned vocals are a cool effect have become a standard technique in popular music. The sound can be heard all over pop and electronica from the last decade. A variety of artists use it, from T-Pain to Cher, and even the J-Pop band Perfume from West's Polyrhythm tutorial. Even President Obama has gotten in on it (well, sort of...).

Every few weeks, we revisit some of our reader's favorite posts from throughout the history of the site. This tutorial was first published in November of 2009.

What you might not realize though is that it's a surprisingly easy effect to achieve. All you need is a source track and an Auto-tune plug in (or an Auto-tune clone, in this case we'll use Logic Studio's built in Pitch Correction).

First I'll explain the parts of Pitch Correction that we're going to use. Next I'll walk through two different examples of how to put the effect to use. In this tutorial I'll use the term Pitch Correction to mean the same thing as Auto-tune.

Pitch correction is mainly described as a way to "correct intonation". If a singer is a little off pitch it can correct this error and make the performance sound better. But the effect can warp the sound of the audio, so for it to go unnoticed it needs to be applied subtly. Eventually someone figured out that the warped sound can actually be pretty cool, and by applying pitch correction heavily you can get some interesting effects. At last, gone are the days when you actually have to be able to sing to be a singer!

When you first instantiate Pitch Correction on an audio track you see the following window:

The only parameters we're going to work with in this tutorial are Response and the individual pitch keyboard. What we're essentially going to do is choose which pitches are allowed to pass through (using the keyboard) and then decide how much of the effect to apply (using the Response parameter). The Range on the left side we'll generally leave on "normal", unless you happen to be working with a particularly low pitched source.

The keyboard allows you to choose which pitches the source sound will be tuned to. If you have every note selected (which is the default setting), then the plugin will determine which pitch the incoming signal is closest to and adjust to it accordingly. Sometimes if you're original signal is especially "pitchy", the plugin can misinterpret the intended pitch. (For example if you sing a C but it is so flat the plugin thinks you meant B, it will "correct" the pitch to B).

Therefore it's generally a good idea to only allow the pitches you want to be heard. If you're original signal only uses Cs, Ds and Gs, then only highlight those three pitches.

The Root and Scale settings allow you to set an entire group of notes with just a few clicks, rather than have to go through and individually select every note that we want to pass through. In this case "Root" is the key you're working in, so in C major your root is C. Scale is obviously the scale. In almost all cases you'll want Major Scale or Natural Min Scale, but you have plenty of options available. It can be fun to click through the different choices to see what kind of result you get.

The Response parameter allows us to determine just how much of the effect we want applied. This is determined in milliseconds. The less obvious you want the effect to be, the longer it should take for it to apply which means a higher response setting. For our purposes, since we're going for a very affected sound, we're going to set the Response time all the way to 0ms. That way the pitch correction will be applied immediately, giving us the robotic effect we're looking for.

Now that we've seen the basic parameters let's see how they can be applied. For our first example I want to create a downtempo electronica track. I want to use a pitch corrected vocal not as a lead singer, but more like just another sound in the overall texture of the groove. I've chosen the following samples from the Deep India library as my base vocal sounds:

The first thing we'll do is apply Pitch Correction, so I'll instantiate the Pitch Correction plugin on the audio track. The default setting is a chromatic scale with a Response time of 122ms. As I mentioned earlier, we need the effect to be applied immediately to give us the specific "vocoded" sound we want. I'll set the Response to 0ms, which gives us the following effect:

I don't really hear much of the effect, mostly because every pitch from the chromatic scale is being allowed through. Let's bring them all in towards a cohesive idea by limiting the pitches. In this case I'll limit them significantly to only 5 notes, a D minor pentatonic scale. 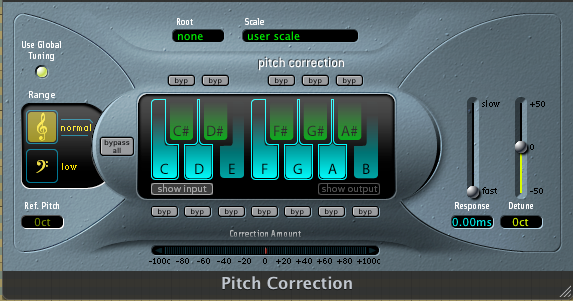 Now listen to how the 0ms Response time and restricted pitch makes the samples sound like they actually belong together:

The Pitch Correction is now where I want to, so I'm going to color up the sound a little. I've chosen a Guitar Rig preset called Phase Wurli (Believe me, there was no science behind this decision. I chose Guitar Rig because I figured it would give me a wide range of interesting choices, and then I clicked through presets until I found something I liked). Here are the vocal samples with the Guitar Rig effect applied:

Here's how the final result sounds in actual context:

The next example will be more of an upbeat dance track where the vocals are actually the lead, rather than just a background effect. We'll start with the source track, which is a lead vocal for the song's chorus. For this song the chorus has actual pitches that need to be matched, so I am going to select those notes individually. Like before, we're going to set the Response time to 0ms. 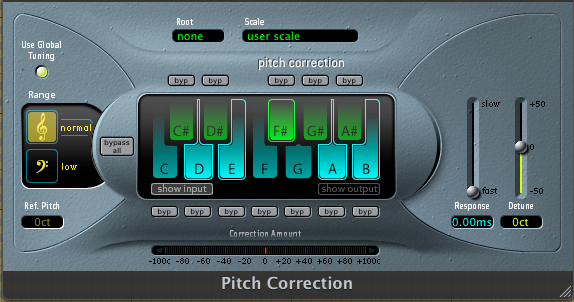 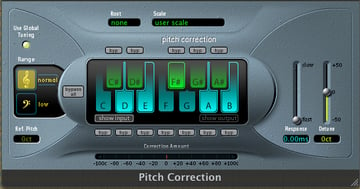 To save myself from public humiliation and to save your ears from bleeding, we're going to skip listening to the "raw" vocal track. Just take my word for it that it needs tuning. Here's the sample with pitch correction:

To keep to the conventions of the style I'm going to heavily compress the vocal. I'll start by instantiating Logic Studio's Compressor and choosing the "Opto Vocal 01" preset. I want to take it further though so I'm going to set the Threshold even lower to -18 and the Ratio even higher to 5.4:1. I want it to be so squashed you can taste the compression. 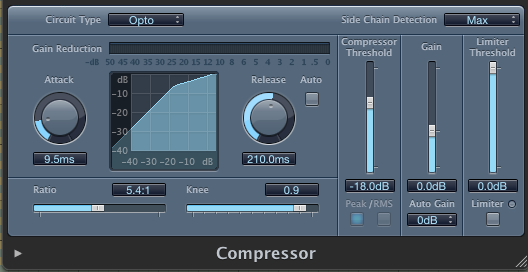 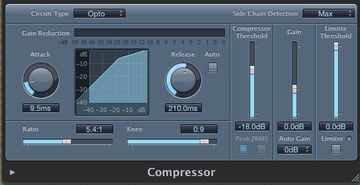 Next I want to beef it up a bit more so I'm going to sing the same line an octave down. Again pitch corrected with the same pitches. and with the same compression applied.

And finally I'll add a harmony above the top line.

Now that there are so many parts going on I don't feel like the lead is cutting through as well as it could. I'm going to add a Stereo Sample Delay plugin to the lead vocal. The Sample Delay will split the signal to the left and right sides, with one signal delayed just a little. This gives us a "doubling" effect which makes the original sound feel much thicker. I'll set the right side to delay by 800ms. Too low a setting and you wont notice the thickening, but too high a setting and the split signals wont feel like they still go together.

And finally, here it is in a the context of a real song:

Using Pitch Correction for warping vocals doesn't give you the same level of control and nuance as a traditional vocoder, but it does allow you to get an interesting effect with just a few simple clicks. All you have to do is turn it on, pick out your notes, and viola: you sound just like any other electronica diva.

You don't have to restrict your use of Pitch Correction to vocals, of course. What happens when you use it on a guitar solo? Or even a drum loop? These tools are here for fun and there are no rules. Experiment!