How to Use Propellerhead Reason 4′s Spider CV Merger & Splitter

The ability to split and merge different sources of audio using the Spider Audio unit is useful indeed, but it’s the Spider CV unit that really allows users to explore new ideas and ways of manipulating sound. Let’s take a look at using this device to totally change the sound of our instrument devices.

Create a new project, and set up a Subtractor, a Dr:REX, a Spider CV Merger & Splitter and a Thor synthesizer, in that order. When you create the Spider CV unit make sure to hold down Shift so that it isn’t auto-routed. 95% of the time you’ll want to make that a habit, since auto-routing a Spider unit is rarely useful. 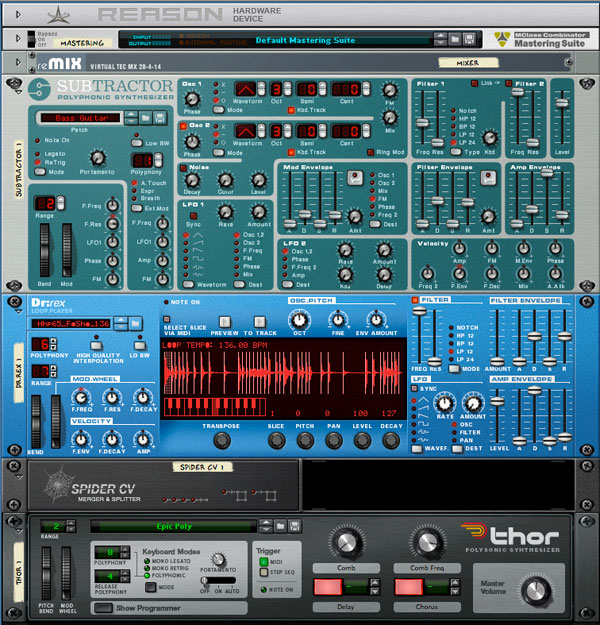 Right click the Subtractor unit and select Initialize Patch. This gives you a completely blank synth to work with. Do the same with the Thor.

Find the Subtractor’s LFO 1 settings section and set them like this:

Head down to your Dr:REX and locate the LFO on the front panel. I’ve selected the Subtractor and the Dr:REX just to show you that you can use the CV parameters from just about any device; it doesn’t really matter what you usually do with them.

Here are the settings I’ve dialed in here:

Now it’s time to wire up the Spider CV unit. Flip Reason around by pressing Tab and locate the back of the Subtractor. Under the heading Modulation Out, the Subtractor will have an LFO 1 port.

Before we wire this, locate the Spider CV. On the left half of the Spider’s back panel are the ports for the merger. The right hand side is the splitter. The first four ports are inbound CV signals to be merged, and the dials above the ports act much like audio level faders — they determine how much of that CV signal will be sent through to effect the sound, and you can mix the different CV signals as much as you like this way.

Drag the Subtractor’s LFO 1 modulation output down to the first input of the Spider’s merger side.

The Dr:REX has a similar back panel with a Modulation Output section — connect the LFO output to the Spider’s second CV merge port. 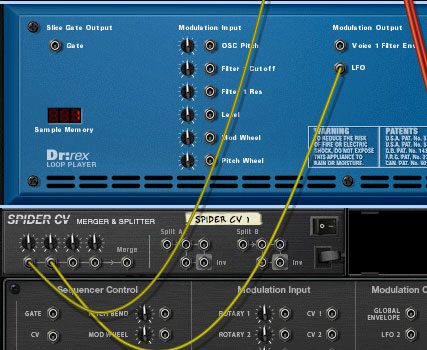 Head down to the Thor and play a few notes through it so you know what the blank patch sounds like. Now go back to your Spider CV unit and connect the Merge output to the Thor’s Filter 1 Freq input, which can be found under the Modulation Input list. Your connection should look like this:

If you listen to the sound of the Thor now, it’s totally different, and you can hear both modulations at work: one regular, smoother and repetitive modulation, and a second erratic, abrupt modulation. One sounds like it’s in time and the other owes its erratic sound due to the lack of timing—that’s because we’ve set Sync on for one and not the other.

Now’s a good time to experiment with mixing the CV signals. Try turning one right down so you can hear the effects of the other alone and vice versa. This will give you an idea of which one you’d rather make the predominant signal.

You’ll find that mixing CV signals is pretty much the same as mixing audio levels; you’re pulling some things back while making others more prominent, while trying to achieve an overall balance.

Now let’s take a look at splitting CV. Essentially this allows you to take one inbound CV signal and share it among several devices. We’re going to take the combined CV we already have and split it.

First of all, disconnect the Merge output from the Thor’s modulation input and reconnect it to the first input port in the Spider splitter: 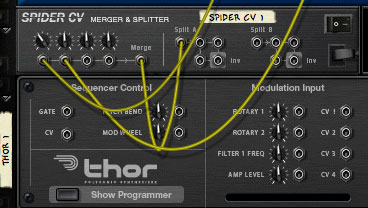 I’m now going to create an additional two Thor devices and load them up with basic patches — one will use the default Epic Poly and the other will use Underwater Asgard Pad. I’ve used these because they’re easy for you to find in the default patch folder (and it makes my job slightly quicker!).

Now you want to do what you did before with the Thor device, but three times over, and using the Split A’s outputs instead of the merger’s single output. Connect the three outputs to the three consecutive Thor Filter 1 Freq modulation inputs. 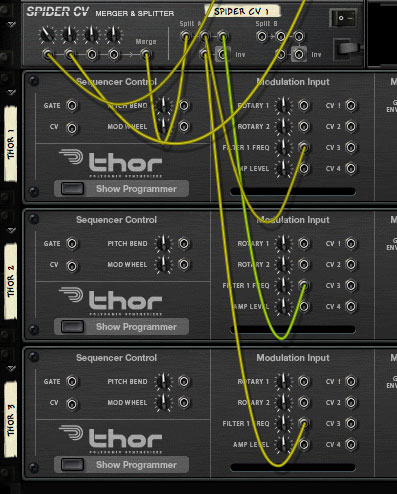 If you create a clip on the first Thor and copy it to the other two, you can hear the CV working in unison across all of them. Here’s what it sounds like when you “synchronize CV”:

The Spider CV Merger & Splitter is a simple device — but the possibilities for your compositions are almost endless.