How to Use Propellerhead Record’s Channel Strip

Propellerhead’s new killer app Record has finally landed. Its an affordable all-in-one recording and production solution and after spending some time with both the beta and final release, I can safely say its about the most CPU efficient DAW I have ever used.

I thought it might be useful for some of you who are using Record, or thinking about purchasing it, to see a run through of some of its key sections. This tutorial will simply walk through the different modules of the monster channel strip in Record’s main mixer.

Record’s mixer is perhaps one of its best features and quite honestly one of the most innovative DAW mixers I’ve seen in some time. Faithfully modeled on the massive SSL 9000k, Record’s mixer emulates its big brother in every way, right down to master buss compressor. The real advantage here is that as the mixer is virtual you are only presented with the number of channels you are using at any one time.

Although Record’s mixer presents an arguably large virtual footprint for a DAW console, its size is customizable and each section can be folded down when not in use, allowing you to view the sections you are currently working on.

To take a look at what the various parts of the channel strip are capable of, I have run some different signals through the mixer and looked at each section in action over the following steps of the tutorial.

An overview of the Record mixer

This is really a pretty simple section of the mixer but one that is so often omitted in other DAWs. Gain controls and a phase reverse switch are grouped with a really useful signal path section. If you have programmed a serious amount of volume automation on a particular track or have recorded something a little low, then that gain knob is going to be pretty useful.

There is also a control for routing the filters to a dynamic sidechain circuit. This can be used to create frequency sensitive processors such as de-essers. This control is also accessible from the actual filters section lower in the strip.

The gain and signal path controls

The dynamics section of the Record mixer delivers just about everything you’ll need to keep your track in check. Even though it’s reasonably compact this section packs in a compressor, gate and expander. There is also a side chain key input here and pretty much any signal from Record’s ‘rack’ can be routed to it.

With Record’s modular approach to routing and side chain inputs on every channel ducking effects have never been easier and the ability of routing ‘anything to anywhere’ certainly seems to be a constant throughout the application. It’s also worth mentioning that when I applied ducking to a few test signals, there was a distinct lack of popping and clicking that I have experienced with other side chain capable compression plug-ins.

The gate also works very nicely and seems to be very musical. Some other digital gates seem to introduce unwanted sharp edges and other unwanted artifacts but after just a few tweaks, all the results I coaxed from this processor were pleasing to the ear.

Drums with moderate to heavy compression:

It’s great to see a true console style EQ in a DAW. Many third part plug-in companies such as Waves, Universal Audio and SSL are charging as much as this entire product for equalizers of this quality, so this really is a step forward. Having used SSL consoles in the past I can tell you that this EQ reacted in the way I would expect when pushed. I haven’t had time to do an A/B comparison but again it sounds very good to my ears.

There is a dedicated filter section before the EQ which cuts the highs and lows perfectly. There is plenty of scope and power here but it remains musical. As i mentioned earlier these filters can be linked to the key input of the dynamics section for frequency sensitive processing.

Below the filter section lives the fully featured EQ, with high and low shelving filters and two parametric midrange EQs covering low and high mids. There are also controls for high and low Q modes and an E control which makes the mids smoother in response.

Drums with some basic EQ enhancement:

Record’s insert section may look pretty normal at first glance but the Props have really got creative here. Those of you that use Reason can think of this section as a hard-wired combinator: it has its own space in the Record ‘rack’ and any processors can reside here, with any routing you like.

This setup means that you are not limited to the traditional format of one processor after another. It allows total freedom in the way you route you insert FX. You can even have sub mixers and signal splitters allowing some really complex effects setups.

The knobs and buttons in the insert section can be programmed to control any part of your insert chain. One knob can even alter several parameters at once. These ‘macro’ controllers can then be named. If you come up with a combination of effects you particularly like you can then save your creation to be used later. There is also a library of preset combinations that you can use if you are not 100% confident. 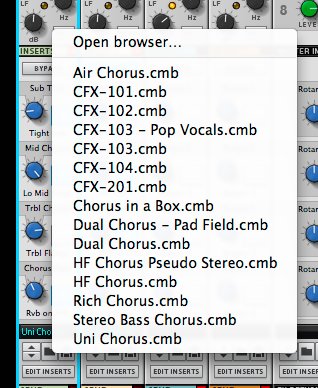 There are an impressive eight send and return slots on the Record mixer. These are easily set up in the master section of the rack area. Each send/return slot has independent send, level and pan controls. You can also configure each send to be either pre- or post-fader.

With this many send and return slots you can easily have four different reverbs and the same number of delays. This really helps strike a contrast between sounds in a busy mix. Couple this with the efficiency of the Record audio engine and you may find this the to be one of the best send return systems you’ve used yet. 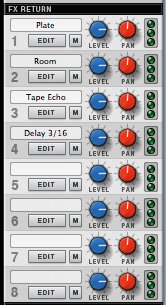 The return slots in the master section

Guitar with a plate, hall and two delays as send and return effects:

The last section in the channel strip is the fader module. The metering is really flexible and various modes are available. You can even view average and peak level simultaneously. There is also an innovative stereo width control that can take you from mono to a full stereo image. This width is represented by a meter in the pan section.

The fader section with mute, solo and pan controls

The usual mute and solo buttons reside on the lower area of the fader section along with handy short cuts to the rack and sequencer. Hitting these will bring up the corresponding devices in each area. Further to your right there is also a cool mini overview of the entire channel strip with a floating box that can be slid up and down to view the desired section.