How to Use Reverb to Create Your Own Pads

Pads are an extremely useful device for all styles of music, allowing for warm, calming, uplifting, sad, ominous, or even threatening effects. This tutorial shows you one simple way to create your own unique pads.

Creating your own pads is yet another way to help build a custom library and develop a personal voice. And by having more control over the various elements that make up your pad, you have more freedom to add subtle layers of complexity and imperfection for an organic sound.

We'll look at three different ways you can use reverb to create a pad, with all three methods using the same settings but unique source sounds. I've chosen Logic's Space Designer but any quality reverb plugin should have the necessary settings, so even if you're on a different sequencer follow along and adjust accordingly.

What we're aiming to create here is something that will take a basic raw sound and turn it into a long, lush and expansive pad. We'll want the sound to be saturated in reverb, with a long tail and a smooth attack. 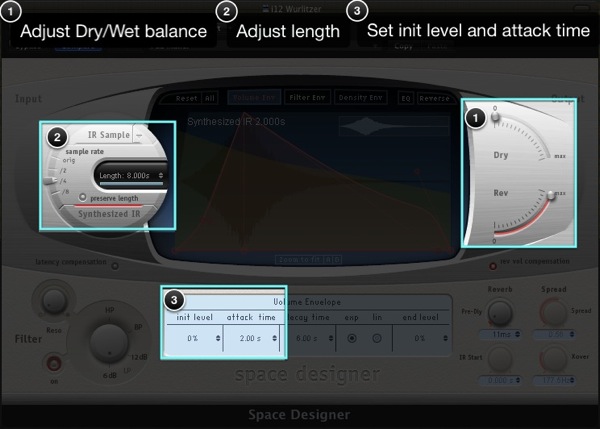 Our first pad will be created off of a simple wurlitzer chord, which will show you just how easy it is to turn just about anything into a pad. Here's the chord pattern I'm using:

It's worth pointing out that proper spacing and voice leading is just as important here as in any other case, if not more so. The reason being that the reverb effect can make everything very quickly turn into a muddy mess if there are too many notes crammed up against each other. Allowing each pitch a little breathing room will give your pad the wide sense of space it needs. Now all we have to do is apply our reverb setting and there you have it: we've created a pad from a wurlitzer!


You might be wondering why I had the keys play beats 1 and 3 of the first measure and then rest for an entire measure before moving on the next chord. It all depends on tempo and the result you're going for, but I found that to be the best solution for tying the chords together smoothly without having them step on top of each other. In this next clip the keys play 1 and 3 of every measure; notice how the when our second chord comes in (at measure 3), the first chord is still sitting on top of it and creating a muddy sound:

And in this clip the keys play beat one of every other measure. The sound dies out before we make it to our next chord, which is not a very seamless smooth sound.

Now that we've seen how the basic idea works, we can start applying it to more complex situations. Here is a varied rhythmic pattern for harp: 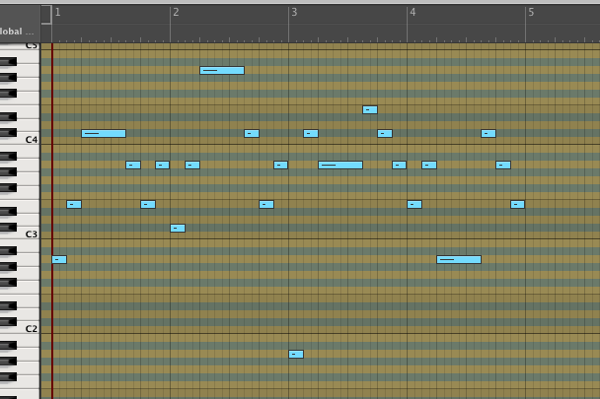 On its own it sounds pretty random and meaningless, but insert the Pad Reverb effect and we have a complex pad:

Although the effects are subtle, there are a few advantages to using a pattern like this instead of the basic chord from the previous example. By having rhythmic motion there is an inherent sense of movement going on in the pad. Even though the reverb effect washes over everything and you may not hear the individual attacks, you can sense a constant feeling of change. Also adding a nice sense of development and variety are the notes at the extreme high and low pitches. When used sparingly, the highest and lowest notes can add that little extra spice that makes the pad sound fresher and more interesting than simply holding down the same chord for 8 bars.

Tremolo Patches as a Sound Source

In this case we're not referring to tremolo as the pulsing effect, but the instrumental technique. The beauty of a good tremolo patch is that while there is generally a smooth performance, a human player can't help but have subtle imperfections and variations in what they're playing. When using a tremolo instrument as the basis for a pad, the result is a smooth sound with a touch of organic complexity.

Here we have a mandolin tremolo patch playing a basic chord pattern:

Simply apply our trusty Pad Reverb setting and we get:

For another example of using tremolo as the basic sound source, here is the same chord pattern on a violin tremolo patch:

Using the Pad Reverb effect on an instrument can create some very interesting results, but you can't just slap it on and leave it alone. The slow attack will usually mean you'll want to shift your notes earlier. For example if you want your pad to start at measure 26, you may need to adjust it back to measure 25 beat 2 so that when it eventually speaks its in the right place. You also have to be very cautious of avoiding muddiness. A full and thick sound can be effective when that's what you're going for, but an unclear and muddy sound is never appropriate. Make sure you are leaving enough space between pitches to keep them from sitting on top of each other, and also that you are leaving enough time for the pitches of one chord to fade out before the next chord comes in to avoid dissonant rubs that are not intentional.

We looked at three way to use reverb to create pads here, but it theoretically should work on just about anything. Try it on a drum loop or even the audio file from an entire song and see what kind of interesting, warm or haunting results you end up with.