How to Use Saturation Effectively

Saturation is an often misunderstood process, sometimes written off as basic distortion effect, too subtle for most uses. While this isn’t entirely inaccurate, saturation has a lot to offer and can impart a true analog flavor on our mixes if used correctly. Most saturation plug-ins are pretty simple devices, but the real key to using the effect is understanding how it works. Let’s take a look at the process in detail and then we can go through a few examples of a few saturation plug-ins in action.

Every few weeks, we revisit some of our reader's favorite posts from throughout the history of the site. This tutorial was first published in June of 2009.

Step 1 - What is Saturation?

Saturation is a process that has its roots firmly in the analog domain. Mix engineers using tape would print ‘hot’ levels to create a type of compression, which is known as tape saturation.

When tape is driven in this way and the level meets 0db (and a fair way beyond) the level clips, but in the analog realm this is known as ‘soft clipping’. The end result is a satisfying, fuzzy overloaded signal which displays natural compression and limiting characteristics. Engineers would use this as a tool on certain elements on the mix.

Digital systems are generally a lot stricter and really anything above 0db is considered as hard clipping. Anything beyond this brick wall should create digital distortion. Of course this isn’t technically accurate when it comes to modern DAWs and interfaces, as many of them incorporate a soft clip algorithm in their channels and master buss. This is why, for the most part, you don’t experience a huge problem if you induce small amounts of clipping in applications such as Logic, Cubase or Reason.

The soft clipping that occurs in these situations is certainly better than digital distortion but doesn’t create the effects we are looking for here. If we wish to recreate classic tape or tube saturation then a dedicated plug-in or hardware processor is called for. Of course you could go all out and invest in some real tape or tubes but as most of us are now producing ‘in the box’, let’s look at some purely digital options. 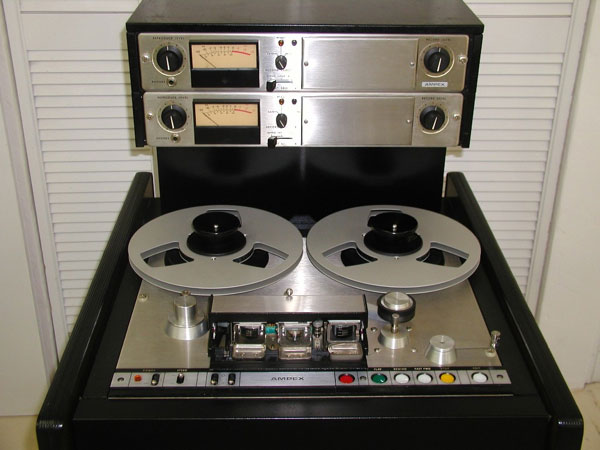 Classic tape machines are famous for their saturation effects

Saturation can work in pretty much any mix element but it really shines on a few specific things, drums being one of them.

A great drum performance recorded through pristine mic pre-amps into a 24 bit DAW can be a beautiful thing but sometimes during mixing they can lack a little attitude and grit. Saturation can supply exactly the right amount of edge without overly coloring or affecting the piece’s original feel.

Most saturation plug-ins work well as inserts and are extremely simple in nature. Once you understand the process of saturation you should know when and where to apply it and to what degree. Ideally you are looking to strike a balance between saturated sounds and cleaner, less colored elements. Of course you could plaster saturation effects across your entire mix but only if you want your mix to sound as if it was recorded to tape!

For this demonstration I have used the excellent URS ‘Saturation’ plug-in on an acoustic drum loop at a few different settings. Hopefully this will give you an idea of what is possible when you are presented with various different flavors of saturation.

The models used are a tube pre-amp at about 30%, followed by a tape machine model at 100%.

Drums with no treatment 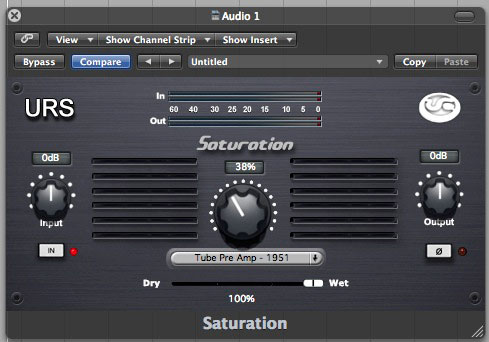 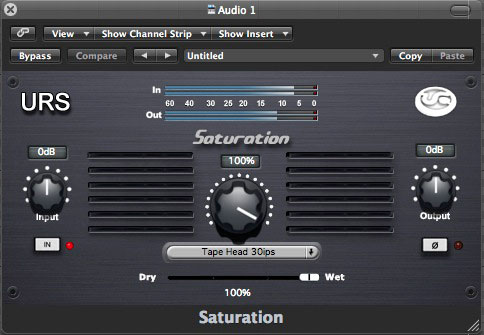 Saturation in any form adds harmonics to the sound. The perceived volume is also raised as natural compression and limiting occurs when the effect is introduced. These combined effects add up to what could be called ‘fatness’ or a ‘warm’ analogue feel. Whatever you call it, it certainly works in both examples here.

The plug-ins I’ve used in this tutorial range from high-end to bundled DAW products. I’m sure there are some interesting free products that offer similar features, so if you know of any please feel free to share links.

Another great way of using saturation plug-ins is to treat synth sequences. Virtual analogue instruments can be brought a little closer to the real thing and most sounds will be given a more upfront, edgy quality.

Here I have fed one of Logic Pro 8’s stock Apple loops through the SPL ‘Twin tube’ saturation plug-in. The sounds that come out of this plug-in are truly amazing and you could be convinced you’re listening to hardware. I’ve barely used the harmonics parameter and have simply dialed in a decent amount of saturation.

The end result is a fuzzy, loud synth loop with a retro feel. This is what most synth lovers strive for and it’s something that’s often difficult to achieve with soft synths alone.

Synth line with no treatment 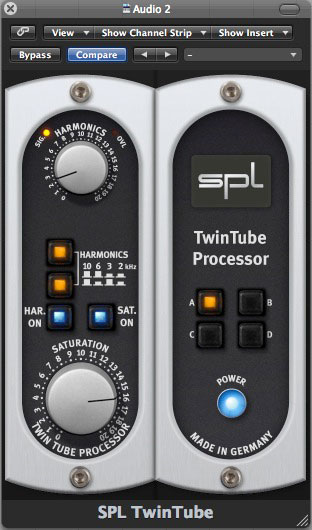 The synth is treated with an SPL twin tube processor.

Surprisingly enough even vocal recordings can benefit from a good dose of saturation. To show it’s not just third-party plug-ins that can deliver the goods in this area, I have used the ‘Bitcrusher’ plug-in from Logic to achieve a similar effect.

With the resolution at full and the bitcrushing off, the drive control adds gentle soft clipping and saturation. This makes the vocal fuller and also quite a bit louder.

Vocal with no treatment 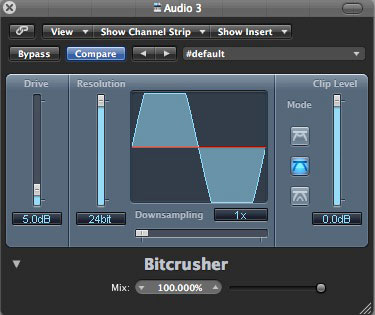 Logic’s bitcrusher is more than capable of some nice saturation effects.

A very common use of saturation is to strap it across the master mix buss. This can give your entire mix an analog quality and can even fool the most discerning ears into thinking hardware was used in the process.

A favorite amongst many for this sort of critical buss and mastering work is the PSP Vintage Warmer. I’ve spoken to many producers who absolutely swear by this box of tricks and use it for most of their buss limiting and saturation duties.

The Vintage warmer has a lot more to offer than just straight forward saturation and is capable of compression, limiting, tape effects and even basic EQ. The audio examples below use only saturation and limiting. This means the overall volume of the parts is boosted considerably but you can certainly hear the saturation effect clearly.

What I’ve done to demonstrate the Vintage Warmer is play all the demo material together and strap it across the master buss in Logic. There are no other effects here apart from some filtering on the synth and the saturation plug-ins that have been covered.

Mix with no treatment 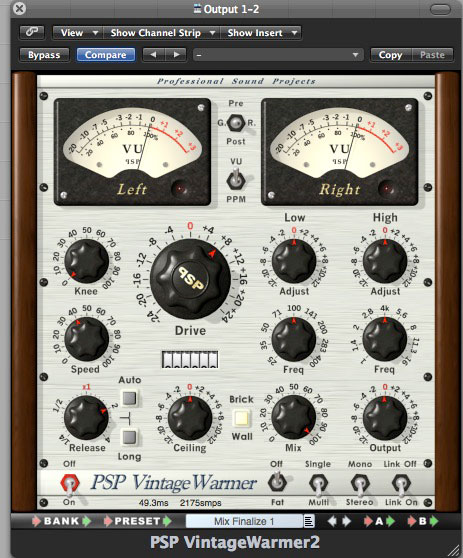 The PSP Vintage Warmer is a favorite amongst producer for mastering duties.