How to Use the Sound Cube to Plan Your Recording

If you don’t lay down plans before you get into the studio, you’re asking for trouble. If you don't, the sounds are going to end up clashing for attention and the song is going to sound like it was thrown together unless you figure out what you’re doing in advance and plan accordingly.

But don’t despair, because today we’re going to go through a planning process that could save you hours (or days, or weeks) in the studio trying to fix problems that could have easily been avoided.

A Three Dimensional Metaphor for Sound

Enter the sound cube. The sound cube is a tool that allows you to give each sound its own space and niche in the context of the track because the three dimensions are represented by their equivalents in the world of sound.

You can, of course, have more than one sound occupying one of those spectrums, but it’ll sound best if you space them with the help of the next two factors.

Stereo Image: stereo image is the left and right on the front of the cube. This is probably the most directly spatial of these factors, though the next comes close. You can place different instruments across the stereo field to maintain separation and intelligibility even if they occupy similar spaces in the reverberant image and frequency range.

Reverberation: reverberation represents distance. Are the sounds far away or up close? A vocal that’s totally dry is going to sound like someone’s spitting in your face, while one that’s very wet is going to sound like it comes from the other side of a cathedral. Because the reverberation to direct noise ratio increases with distance, our ear determines the amount of direct noise in what its hearing to place a sound.

So, with these three dimensions of sound, we can actually fit quite a bunch of instruments in by varying one or more factors. If I want to mix a bass guitar and an basson, which are both low, bassy instruments, I can push one further back or push them apart in my stereo field to prevent them from running together.

Of course, if you were after blurred edges between your instruments, you’d put the two bass frequency instruments in the same place on the cube.

This crude little diagram might help you visualize the concept. 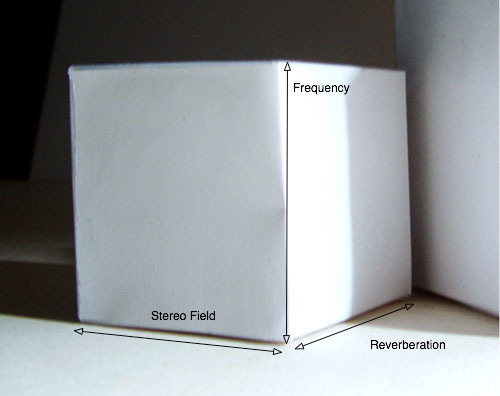 I recommend sitting down and thinking about the track and what it needs to be comprised of. If you're recording someone else's work, this involves some discussion about how everything is going to fit together with the artist.

Always make sure you’re moving towards the end goal. Each sound in the piece needs to have its own niche, a place to exist that is not dominated by other sounds, unless the musician is deliberately attempting to blur the intelligibility and separate audibility of those two (or more) sounds. The end goal is to know where each and every sound is going to go.

So, what questions do you need to ask to determine this?

Which instruments am I recording? Know in advance. Studio experimentation is fun, but don’t bank on it saving the day during a creative dry spell. Let it happen but try your best to know what’s being recorded well in advance. Never depend on experimentation during the production phase. It’s cool in the writing phase of the song’s development.

What do I want each instrument to achieve? Each instrument needs to be in the track for a reason. Otherwise, it’s a waste of time, energy, money, and more importantly, a waste of some of the space in the song that could be used to emphasize or introduce other things.

Which instruments will be close up, or pushed back? Determine which of these instruments need to be up close or pushed back. A good song will usually strike a pretty good spatial balance between frequency and reverberant space so that they don’t clash, but if they do…

Which instruments will be louder, quieter? Of course, one of the most basic of factors is which instruments should be louder or quieter, not in terms of space, but pure volume. Volume can cause points on the cube to swell into spheres, so to speak. Loud instruments take up more room than quiet ones. Remember to factor in relative loudness, too—if you want something to sound big and loud, you’ll need to include quiet instruments just to create that relative illusion.

Get it On Paper

Now, once you’ve thought it all through, you should get a clean piece of paper and mark it all up so you’ve got a handy reference guide. You’re going to forget this stuff if you don’t write it down, and if you confuse the brainstorming phase with this phase, you may get confused trying to figure out whether a note you've made was an idea or a decision.

There are a few ways you can mark this stuff up depending on your own individual preferences for dealing with information. Do you draw a cube and mark out various positions within the cube? Do you do a track-by-track listing with short descriptions? You might write:

When it comes time to record and mix, you’ll know exactly where to put that track in the context of the rest. I do recommend playing with a cube diagram, at least in the final stages of your brainstorming session, because a visual reference lets you check that you’ve given each sound enough room and an appropriate spot.

If you usually find yourself battling unorganized, sludgy mixes, these ideas might help you to retain clarity throughout the recording process. Good luck!