How to Use Transient Designers in Your Mixes

Not long ago, transient designers were only available as hardware processors. Now, a number of DAWs and plug-ins are dragging the technology into the digital domain. With all these new emulations and interpretations of a classic processor becoming available, it's well worth familiarizing yourself with what could become an essential part of your production process.

It’s possible that you may already be aware of this type of processor, just by another name. Transient designers have been given names such as transient modulators (Transmods), envelopers and signal modelers. If you are not familiar with this breed of plug-in, it might be possible that you actually have one in your collection without even knowing it.

Cubase and Logic both include Transient designers as part of their plug-in package and it is now possible to purchase high quality processors for this purpose that run on both dedicated DSP platforms and your native processor. Sonnox, Universal Audio and SPL are now all supplying excellent solutions for transient design. There are also a few great free products that we’ll look at here.

Let’s take a closer look at where these processors came from, how they work and see how we can use them in real world situations.

What is a Transient Designer?

If you have never used a transient designer of any kind or are just not familiar with the process, at this point you may be wondering what I’m talking about. Let’s take a quick look at the process and its history.

The first transient designer was designed by Ruben Tilgner using his ‘differential envelope’ technology and the result was a two channel hardware processor released by Sound Performance Labs (SPL) of Germany. The processor used a combination of VCAs (voltage controlled amplifiers) and envelope followers to clamp down on specific areas of a sound’s transient events.

The original hardware (and most software incarnations) only had a few knobs, which controlled attack and sustain. Don’t be deceived by the simplicity, as this processor can solve all sorts of problems and create just as many interesting effects. In fact, when SPL brought out their original transient designer, engineers were so taken with the ability of the unit to completely transform their drum tracks that many of them saw the unit as an absolute studio essential.

How do these things work for us in the mix? Well, essentially a transient designer affects the attack and sustain phase of a sound and are capable or drastically enhancing or attenuating each of these with pin point accuracy. For instance, using a transient designer we’re able to increase the attack of a snare sound or clav pattern, or even reduce the sustain of a live percussion loop to reduce the room sound in the recording.

Of course these things can be achieved with some success using other dynamics processors such as gates and compressors, but you’ll find that once you start using transient processing, the speed with which you can achieve these effects really leave the more traditional methods behind.

Transient designers also tend to be very versatile and are not just limited to drums as is often the misconception. They are just as happy strapped across a vocal or guitar track and can even work wonders as part of a mastering chain.

As mentioned previously the early two-channel SPL transient designers only featured two controls, one for attack and one for release. New hardware models and plug-ins that emulate the hardware faithfully also only feature these two controls, but some newer adaptations of the processor sport considerably more tweakable parameters. It is worth noting that SPL now make the transient designer 2 and 4 which can both treat multiple signals at once.

Both the Sonnox ‘Transmod’ plug and Logic Pro 8’s ‘Enveloper’ plug-ins feature interfaces with considerably more controls than the more traditional versions. To make sure that everyone is catered to, the following examples will use several different plug-ins. Obviously the difference in quality between the Sonnox plug-in and Cubase’s bundled version is going to be noticeably different, but the following sections should show that good results can be achieved and that the theory is technically the same across the board.

Arguably the most common way to use a transient processor is to add punch to a sound by increasing the level of the attack phase in each transient. Pretty much all of the processors covered here will do a good job of this but here I have used Universal Audio’s recreation of the latest SPL transient designer hardware. In this scenario the plug is running from a UAD1 card inside Logic Pro 8.

I’ve taken a simple drum loop that sounds slightly muffled, perhaps due to the recording which normally might get dumped. The SPL transient designer is loaded and a slight amount of attack is added. Life is added to the loop and you can clearly hear the punch introduced to the initial transients of each drum sound. 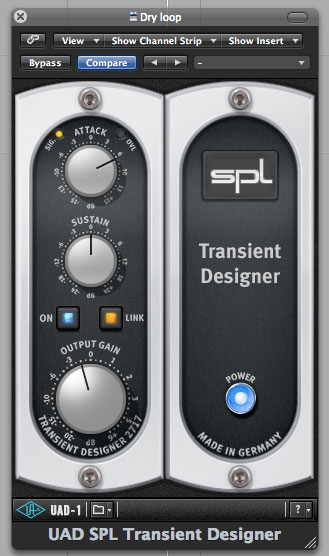 When adding attack in this way the volume of the signal will be increased, so it’s well worth lowering the output level of the plug-in to avoid clipping. Of course, you could take things much further here if you liked and further processing such as EQ and limiting would help polish things off.

Of course these examples may not show an improvement over the original sound — they are simply here to demonstrate the effect of the process.

The exact opposite of adding punch and snap to sounds involves softening the attack of a sound’s transients. For instance say you record a percussion or guitar part and you find the microphones were too close, or a plectrum was used as opposed to finger picking. You may find these sharper sounds have a little too much bite and cut into other elements of your mix.

Traditionally the solution would be to use dynamics processors such as a compressor or limiter, in some cases the situation might even require going back to the drawing board and re-recording the sound! This is where transient design really comes into its own as a problem solver, it really can save the day when it comes to getting certain instruments to sit perfectly in your mix.

Here I have chosen a synth pattern with plenty of attack and very ‘spikey’ transients. The Sonnox native ‘Transmod’ plug-in is then loaded into Cubase and the ratio control is lowered until we can see the meter showing reduction of the attack phase. The synths aggressive nature is now tamed and would now sit comfortably in a mix with other punchy elements. You can see that even with a processor that features many more controls its pretty easy to get a handle on which parameter does what. 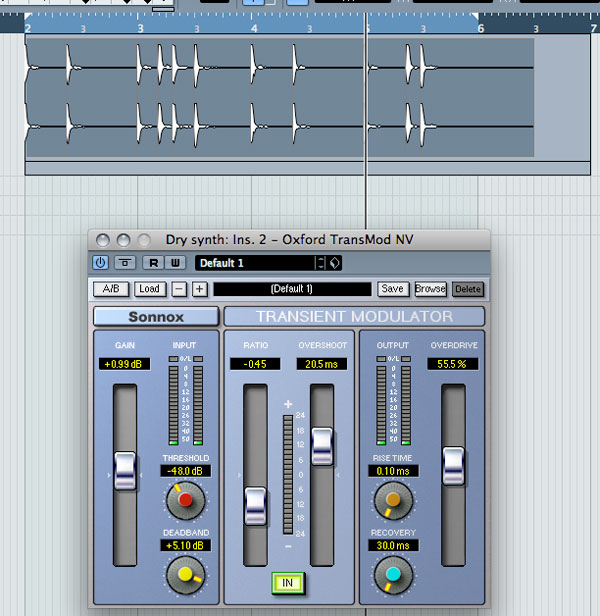 Another really useful technique using transient processing is removing room sounds from a recording, or even excessive reverb or delay that may have been imprinted on a file. To do this its simply a case of reducing the sustain control to the right amount. Although we don’t have many controls to think about here its important that you get the settings just right for the sound you are using, take things too far and you can end up with nothing more than a snap from the attack phase of the sound. 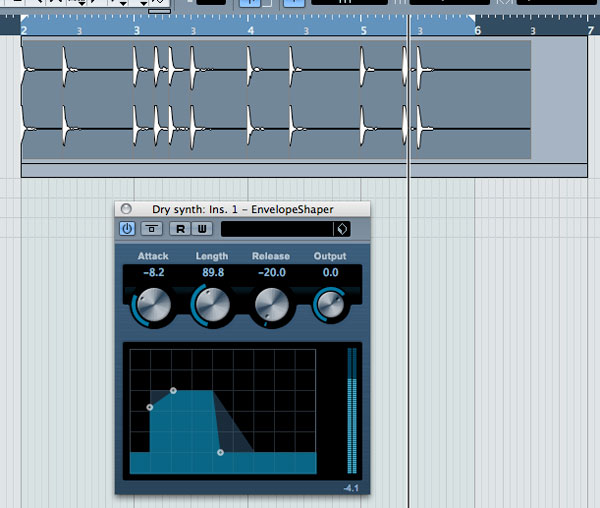 For this example I have continued to use the synth pattern for the previous stage. The synth is loaded with a pretty heavy reverb and this could make it drop back in a mix and make it generally less defined. By loading up the Cubase ‘Envelope Shaper’ plug we are able to turn the release setting to a minimum and really pull the reverb effect level down, without detrimentally effecting the actual synth pattern.

By dialling in large amounts of sustain on any of these plug-ins really interesting effects can be produced. Often the result can be comparable to that of driving a compressor really hard. This is certainly more of an effect that a problem solving technique but it can be great for increasing the apparent volume of sounds and imparting some character. 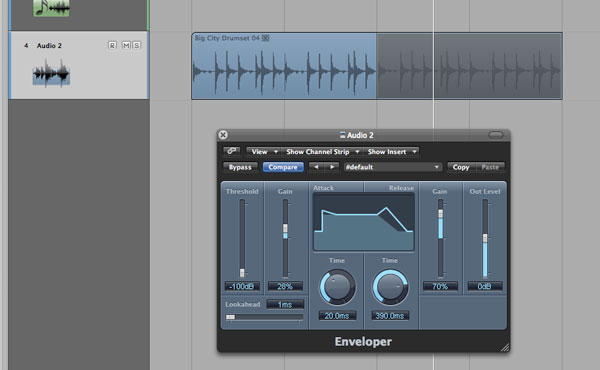 I’ve grabbed a simple rock drum loop for this one and once playing back in Logic I loaded the bundled ‘Enveloper’ plug-in and dialed in some serious release gain. This makes the loop sound huge and possibly not that usable, apart from in an effects passage, but it does demonstrate what happens if you push the process hard enough.

Of course these examples don’t cover all the ways you could utilize transient designers but hopefully they go some way to showing you what an important mixing tool they really are.

Here are some links to check out for specific plug-ins…