How to Use Vocoders in Remixes

by Mo VolansJul 29, 2010
Read Time:5 minsLanguages:
Audio ProductionLogic Pro
This post is part of a series called Producing Vocals: From Mic Placement to Mixing.
How to Make One Vocal Sound Like a Choir
Creating a Vocoder Freeze Effect

So maybe you've just been given a vocal part to remix and no matter how hard you try you just can't get it to sit with your style of music. Maybe the progression is just too 'light' or perhaps you already have a piece you want to use. Whatever the reason, vocoding could really help you out in this situation.

I've used the vocoder thats bundled with Logic Pro 9 for this tutorial but as usual these techniques can easily be translated to other DAWs and essentially any other vocoder.

Often when you a vocal part arrives as part of a remix project, it can be a challenge from the outset. If the timing, intonation or style clashes with your own then things have to be hammered into shape. Often this calls for some extreme processing.

A good few years ago I remixed Tears for fears for a major label and had this exact problem. My solution was to heavily vocode the vocal part. This meant it was still very much a part of my mix but the change in it's musical progression meant that I was able to fit it around my work instead of me working around it.

Of course sometimes it's easy to work around the vocal but this treatment can at least give you the option.

To avoid any messy copyright issues I've used a vocal phrase from Apple's 'Voices' Jam pack. It's maybe not the ideal example of a vocal remix part but it should work nicely for the purposes of demonstrating the technique.

The vocal part we'll be using.

Let's assume that at this stage you have already constructed a basic loop to use for your remix, or at least have an idea in mind. I have thrown something basic together, rather than develop an entire song.

The drum and bass parts.

My idea currently consists of a drum loop and bass part. Even this simple combination has it's own mood and musical progression. When the vocal part we have is added you can hear that it just doesn't fit musically. The timing is correct but that's where the good news ends.

The loop and vocal at this point are not playing nicely together.

The raw, out of tune vocal.

An option here would be to write some musical parts to work with the vocal but sometimes you will want to stick to your own style. This is where the vocoder comes in!

This is the point where you can load up your favourite vocoder plug-in. There are loads of them about and many DAWs bundle them as standard. I was actually planning to complete this tutorial in Cubase but it appears that they have ditched their vocoder in version 5 / 5.5... So Logic's stock vocoder it is! 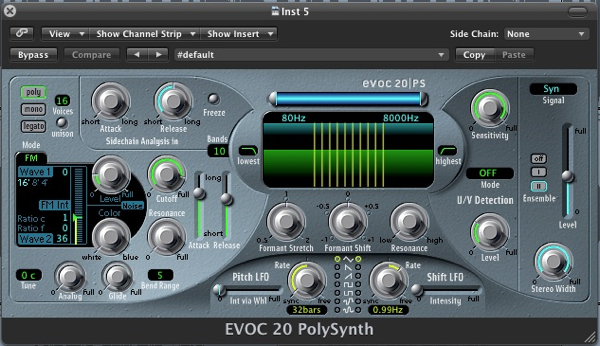 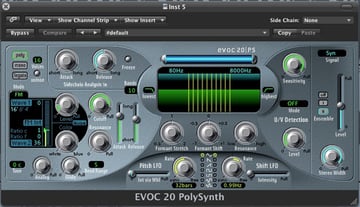 Most vocoders are treated by your DAW as instruments, as opposed to plug-ins. This means that you have to route MIDI and audio to them in order for them to produce sound. (These are traditionally known as the carrier and modulator.)

The audio we are feeding our vocoder with in this case is obviously the vocal. This is routed by using the instruments side chain input, in the top right. Once connected you are ready to start programming MIDI. 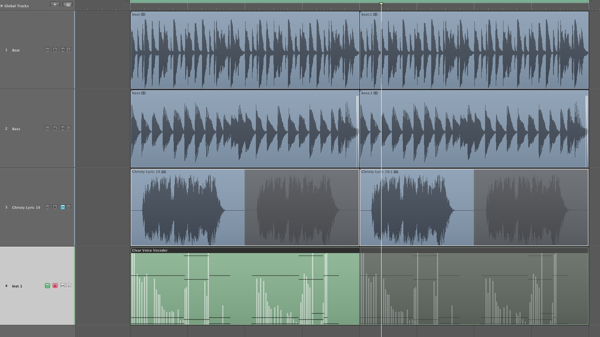 MIDI routing is usually very straight forward and is often created when the instruments MIDI track is created. Ultimately this means you are good to go as soon as your vocoder is loaded and has audio being fed to it.

On a successful test of the connection I started to play a new progression. I picked something that worked well with my current loop but also allowed the vocal to be heard in full. In short match your chords placement to the vocal phrasing. 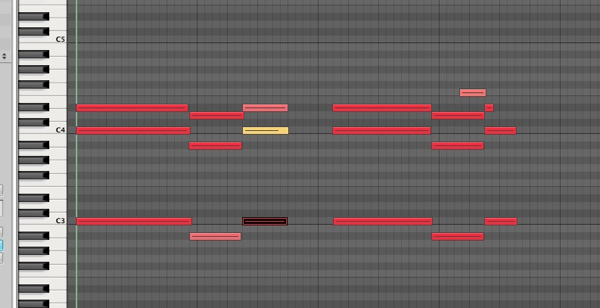 The new progression is recorded.

If you are pretty new to vocoding it might be a good idea to start with a basic pre-set. Try to go for the most intelligible one you can find, this will ensure that as much of your vocal as possible is understood by the listener. 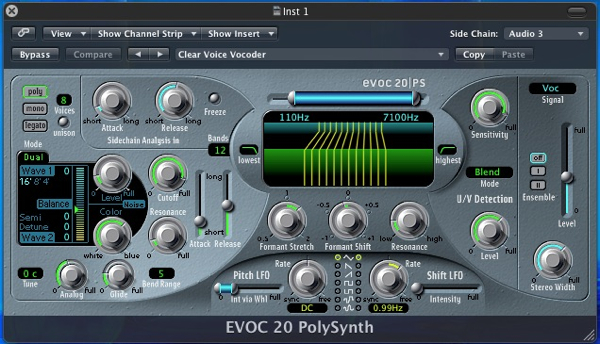 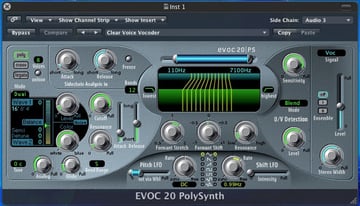 The vocoders settings get tweaked for clarity.

The new vocal in isolation.

If you find that things need to be cleaned up further (as I did here) you can tweak things a little. I simply increased the amount of bands used, to produce a more refined, less grainy effect and also opened up the filters to ensure a nice bright sound was created. I also tightened up the vocoder envelopes a little.

The raw vocoded sequence with other parts.

Finally with my vocoder working satisfactorily and my musical elements in place I added a small amount of delay to the vocoded signal to open things up a touch and add some space. A compressor was also added to ensure that every part of the sequence was as up front as possible.

The final effect is obviously not a natural one but for electronic music it can be a really good way to include the vocal parts supplied but also stick to a specific style of production. 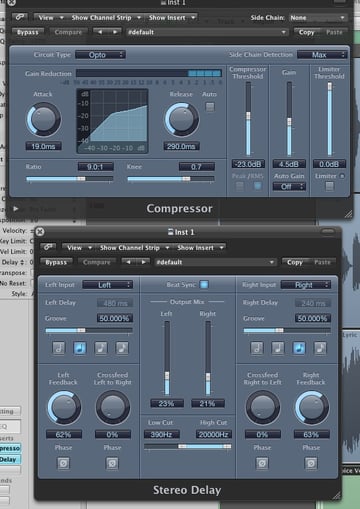 Compression and delay are added.

The final result with some effects added.