How to Write an EDM Melody with Ableton Live MIDI Effects

Today I will show you how to creatively use Ableton Live’s built-in MIDI effects. I previously demonstrated the power of MIDI effects and I promised to make more tutorials in this subject.

I assume that you have a working knowledge how MIDI effects. If not, then you should go back and read it again.

I realized that the arpeggiator, chord, note length mixed with a scale effect can be a really powerful combination for creating EDM music. EDM music is not like orchestral music so it is not important to create complex chord variatons. Often the songs contain only two-note chords and in some situations the producers double or triple some of the notes through different octaves to create illusions of complex chords.

In this exercise I will use a six-note chord which actually is only a four-note chord with some of the notes doubled in the higher and lower octaves. So let’s make some melody.

So you'll be making a melody on a MIDI channel. But before you do that you have to create an instrument. I created my own programmed operator patch. You can do your own, or use my pre-set from the attached project file.

So listen first the basic melody:

It’s a really simple four-bar melody with five note changes. The basic BPM is 128 so later you can decide which style you would like to continue this melody. I used some delay and reverb on the return channels.

Here how is sounds:

Now we have the basic melody, it’s time to make some notes. I used a Chord effect to create the basic chords:

It’s quite funny because diminished sevenths only occur on minor scales. So maybe I was wrong because this chord only exist on minor scales but we are using a major scale. Don’t panic we will fix that later on.

So after we calibrate the Chord plugin let’s listen the melody:

You can hear that is a really good melody. But the last chord isn’t quite the best, because it's a hybrid chord.

In order to eliminate that we have to use a scale plugin. Now you must chose the C Major pre-set from the device browser which you can find underneath the scale effect. Turn the base pot meter to C#.

Now listen again. You can hear that is much more pleasant to our ears. Because the scale plugin changes the A# into a B note at the last chord so the perfect fifth become a diminished fifth.

Step 3. Use the Arpeggiator and Note Length

To create a more interesting melody I used an Arpeggiator. I used Chord Trigger Style so it will create only a rhythmic pattern.

I used the rate control on 1/16 and the gate on 106 percent. Now you can feel that every chord sliced to 1/16 pattern continuously. But I changed the rhythmic a bit more.

I turned on the Retrigger into Note and the repeats to 4 or 5 (depending on my taste). So we have a basic chord progression. But don’t stop right there use the note length in order to create some change on the rhythm. 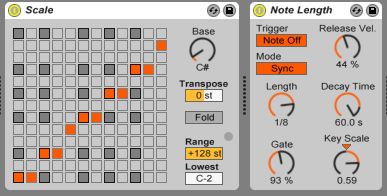 I used the note off button and I automated the decay time. I used the clip envelope mode and draw some columns on the decay parameter. Now you can decide how to automate you rhythm. 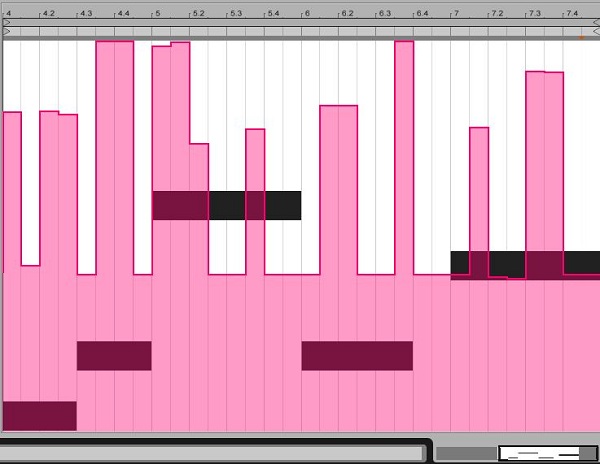 I hope I have helped you to write great melodies with these simple devices. Don’t forget to combine them in several ways.

See you in next time. Happy music making!