How to Write Theme & Variations

If you have been following along over the past few months, we have been gradually expanding from the smallest musical ideas into larger and larger pieces of music.

In this next tutorial we'll go a step further and learn about Theme & Variations, a valuable form that has been around in some way or another for as long as there has been music.

Theme & Variations has many practical purposes even in contemporary composition. Film music, for example, often uses a limited number of themes to identify particular characters or ideas. Repeating those themes over and over in the exact same way can be boring, however, so learning about how to create variations can give the themes new life.

Practicing variations is also great for your composing chops. You learn how to make the most of limited material and develop technical fluency, becoming able to direct a given set of notes to express anything you want them to.

Variations can be thought of as repetitions of a theme with one or more musical aspects changed, either slightly or drastically.

For example, you might play the theme in the exact same way, but instead of quarter notes in the accompaniment, you expand it to sixteenth notes. Or instead of using simple diatonic chords, you re-harmonize the theme with complex chromatic harmony.

For each variation, usually the same changes are applied throughout the whole pass through the theme. Meaning if the melody has been changed from quarters to sixteenths, typically that will be the case for the entire length of the theme until the next variation begins.

What Can You Vary?

Any musical feature of a theme can be varied. There is a lot of room for creativity regarding what aspects of a theme you can modify and in what ways.

Just a few of the things you can vary in a theme include:

A typical "Theme & Variations" from the classical era almost always uses a small ternary form for the theme. This is the ABA form that we discussed last time.

Usually all of the repeats are included, meaning the form expands to AA-BA-BA. The extra repetitions of each section help us really get it into our ears so we can recognize it under the coming variations.

The theme is also usually presented in a very simple way, meaning simple melody, simple harmony, simple texture. Not only does that make it easier for us to hear the theme, it also gives us a very clean starting point from which to add complexity on top of with the variations.

For our examples here I've chosen Mozart's Variations on "Ah vous dirai-je, maman", or better known to us as Twinkle Twinkle Little Star. I chose this example because the variations are very clear but more importantly the tune is so familiar that it is easy to follow along.

In the case of Mozart, with just a few ornaments here and there the theme is played almost entirely in simple quarter notes with basic diatonic harmony. It's a 24 bar theme made up of an 8 bar A section, 8 bar contrasting B section, and a return to the 8 bar A.

(Thank you to Stefano Ligoratti for providing the recording under Creative Commons Attribution 3.0.)

Now let's look at some of the ways Mozart varies this basic theme.

A good place to start is to vary the melody, usually by embellishing it with ornaments, grace notes and faster motion, or by changing the rhythm. Underneath any surface level changes the main skeleton of the theme always remains.

In variation V the melody is changed by shifting the rhythm to a more lively offbeat pattern. In the B section of the theme there is also chromatic movement down as F-F in bar 10 is changed to F#-F, E-E in bar 11 is changed to E-Eb. There are also some 16th notes added in the B section and final A for an even more active melody.

Despite the variations you can still easily hear the underlying Twinkle Twinkle Little Star melody. 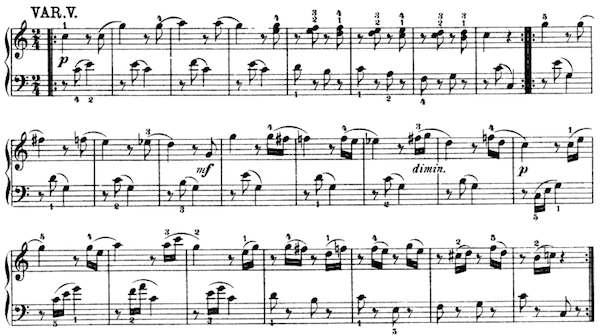 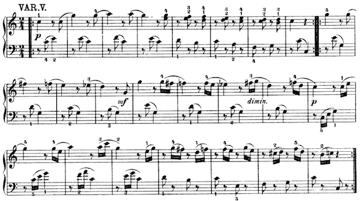 Variation I uses passing notes and neighbor notes to change the activity of the melody from quarter notes to sixteenth notes. Again all the important structural notes are there, even as they are surrounded by a complex flurry of activity. 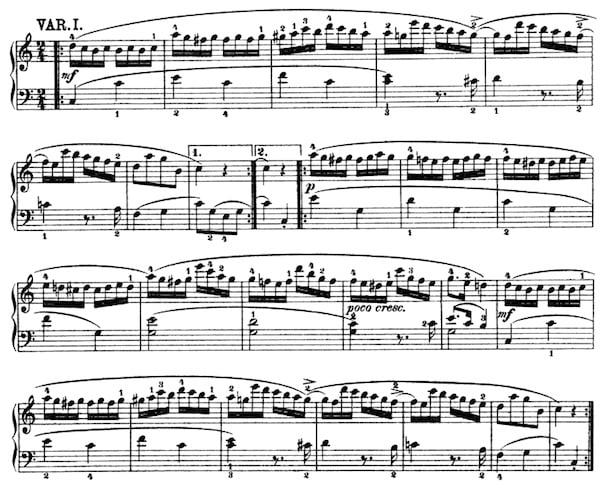 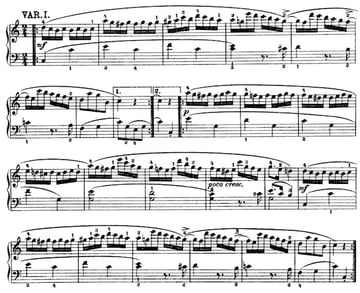 I'll remind you again to notice how Mozart applies a single variation technique to the whole 24 bars, so it feels like a cohesive section.

There are a lot of ways to vary the harmony of a given theme.

You could reharmonize the melody with different chords, such as in variation VII where bar 6 is changed from C to E7. This is a change from the I chord to the secondary dominant of vi, V/vi. (Look and listen for the G# in the bass.)

Although the chord is different, the melody note it supports remains the same. 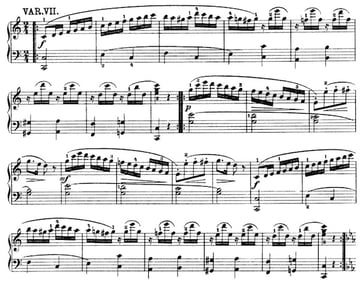 An even more drastic harmonic change is to shift modes. In variation VIII the theme is changed from C major to C minor. This is a great technique to remember because it demonstrates how one single theme can express a lot of very different moods. 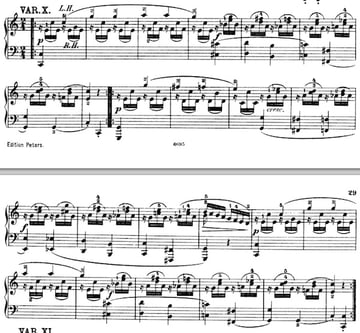 Rhythm is a good aspect to vary that can express a very different character or feel. 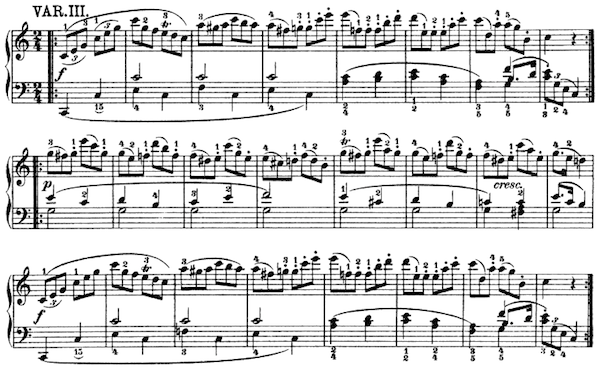 Variation XII takes an even more drastic approach to varying the rhythm by changing the meter from 2/4 to 3/4. This means every measure has an extra beat to contend with, which Mozart fills mostly via rests (bars 1 and 2) or repetitions (bar 3).

Another great way to create something drastically different from the original is to vary the tempo. This can of course go in either direction as faster or slower, and in Mozart's case he decides to do one very slowly.

Variation 11 is marked adagio. The change to a slower tempo gives Mozart room to be more playful and ornamental. He introduces grace notes and trills and explores a variety of textures.

Rather than keeping it one texture throughout like most of the variations, this variation is more like an entire composition with contrasts in texture and motion in the accompaniment.

The main theme is about 45 seconds but this variation is three minutes long! They're both only 24 bars each.

This variation is my favorite of the set because you could play this for someone out of context and they probably wouldn't even that realize it's just Twinkle Twinkle Little Star! He has applied many small variations to change this piece into it's own music, but if you listen for it you can always hear that original theme underneath.

A common aspect to change is the texture. By texture we could mean the number of voices, whether it is contrapuntal or melody with chords, block chords in the right hand or a single line, etc.

Mozart makes changes to the texture in every one of his variations.

In variation V the texture changes from two notes in perfect sync with each other to a call and response pattern between the melody and bass. Although the theme has two notes playing at a time, the uniform rhythm gives them a cohesive sense of being one unit. Variation V separates them rhythmically so we hear a distinct two part texture. 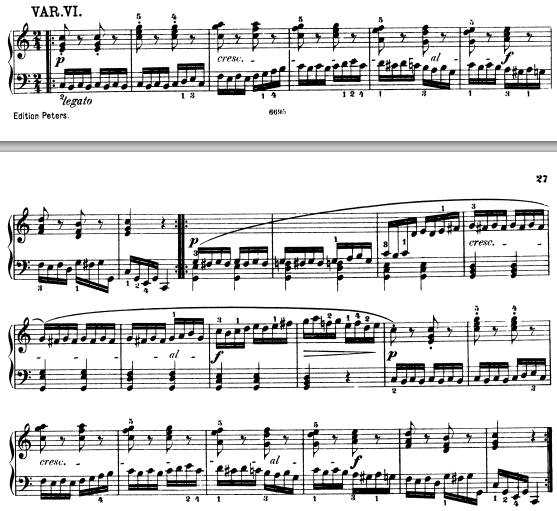 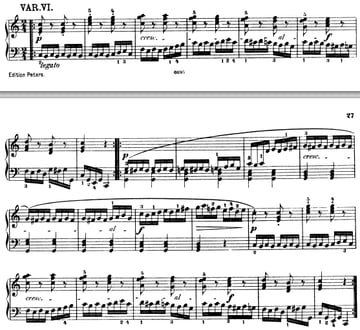 When Theme & Variations are presented as a set, like the one we are looking at, the composer will often cap the whole thing off with an extended coda at the end of the last variation. This gives the whole piece a strong feeling of closure and a very marked ending.

When the last variation ends we might be expecting yet another one to begin, but an emphatic coda is a way of indicating to us that it's really over.

Variation XII, being the final variation of the group, includes an extended coda at the end. The coda comes after the repeat of BA at bar 25 and is like a grand fanfare celebration to give the piece a sense of finality and closure.

Variation XI, the slow one, is a perfect example of the power of variations. Even if you were not writing a set of formal "Theme & Variations" like Mozart did, you can see that the technique means you can take a pretty boring everyday idea like Twinkle Twinkle Little Star and turn it into a beautiful piece of music.

I highly recommend you seek out more music in the Theme & Variations form to listen to and analyze. Particularly great ones include Beethoven's Diabelli Variations and Brahms' Variations on a Theme of Haydn.

There's even a piece by Elgar called "The Enigma Variations," the enigma being that no one knows what the original theme for the variations even is!

Once you begin to train your ears to hear variations you'll probably start hearing them more in other pieces as well, perhaps within a single composition or in different cues in a film score.

Share your discoveries in the comments and let us know some of your favorite techniques for modifying an original theme.