In this tutorial we are going to cover how to use FL Studio's chord tool to make putting chords in much easier. Reading a chord name is relatively easy but knowing which notes go into the chord is not something everyone knows. That's where this tool comes in handy. As long as you know how to read the chord name you can easily insert chords into a piano roll with the chord tool.

This particularly useful if you want to remix or redo a pop or rock song that's normally played on a guitar or piano and you can find the chord sheet online in or in a book. Ironically, the chords to Pachelbel's Cannon in D is the basis for some of the most popular rock and pop songs of the 20th century. With this in mind, let's use the chord to help us recreate Cannon in D!

Before you redo a song you need to analyze the chords so that you know what you're working with. Thankfully for us, the chords are simple major or minor chords with either the maj or min suffix. The chord progression for Cannon in D is D major, A major, B minor, F# minor, G major, D major, G major, and A major.

Step 2: Choose your Synth and the Piano Roll

Now that we know how to read the chord progression let's put them into a piano roll. First pick out your favorite synthesizer and choose a nice pad sound since these will be chords not melody; ill be using the Sytrus synth with the "Fairy" preset under pads. After that make sure the synth selected and open up the piano roll by clicking on this button:

What we are going to do is put the whole chord progression into a single FL Studio pattern since the progression won't change later. Click on the arrow button in the top left corner of the piano roll window and scroll down until you get to the chord drop down menu. From here it gives you all of the suffixes for most all chords (albeit a few may be missing). Since the first chord of Cannon in D is a Dmaj chord, pick the Maj suffix from the drop down menu.

With the Maj suffix now selected, find the note D-3 and left click using your draw tool (looks like a pencil) to create your first chord. You'll see you now have notes on D-3, F#-3 and A-3 which happens to make up a D major chord. Now stretch the length of the chord so it is about one bar long.; this will give you time to really hear the chord. The chord should sound something like this: 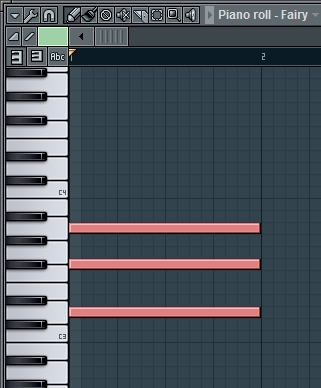 Step 5: Filling in the Progression

Now that you know how to put chords in using this tool just fill in the rest of the chords, each being a bar long. You either alternate between maj or min in the chord menu or do all the major chords on their corresponding bars and then go back and do the minor chords. If you want to turn off the chord tool, go back into the chord menu and at the very top should be "none". When you are done with your piano rolll should look and sound something like this:

You can also play with different chord extensions like 7ths, 9ths, etc. and come up with a more modernized Cannon in D progression. Here is what I came up with using DMaj7, Amaj7b5, Bmin, Fmin11, Gmaj7, Dmaj#11, Gmaj7b5, and Amaj, in addition to my own melody. Hope you enjoyed!