by West Latta26 Jan 2009
Difficulty:IntermediateLength:ShortLanguages:
ArrangementLogic Pro
This post is part of a series called Recording Vocals.
How to Use Pitch Correction for Vocal Effects
The Producer's Guide to Putting Passion into Vocal Delivery

The world of sample libraries has grown tremendously in the past few years, giving composers wide-ranging options for creating sweeping scores that incorporate fantastic sounding vocal effects. Choral sample libraries, such as EWQL Symphonic Choirs will even 'sing' lyrics that you write!

But there are some situations that call for a more unique approach to vocal treatment. When a choir or multiple singers are not available, composers turn to software to help them achieve their goals. This tutorial will focus on using Logic Pro and several of its plugins to create a multi-layered vocal treatment that might be appropriate for ambient, new age, or soundtrack work.

We'll first begin by acquiring our source sounds. For this particular project, I've decided to use some self-recorded vocals using a style similar to Tuvan or Tibetan Throat Singing. These types of vocalizations work well for establishing a dramatic and unique mood.

I've recorded several takes, each with slight variation and duration.

Next we'll lay out these four variations on individual tracks, which will allow us to process each track individually as a unique voice.

As we begin our arrangement, we want to explore ways to create motion within the piece. Even though each of these four samples is relatively static, you'll notice that the fourth sample is slightly longer and at a lower pitch. We'll use this variation as a basis for our arrangement.

Because we only have one take at this lower pitch, however, we're going to duplicate that track to add depth to the layer. We'll use a common A-A-B-A arrangement here, where the first, second and fourth phrases are the same, and the third phrase acts as a variation. 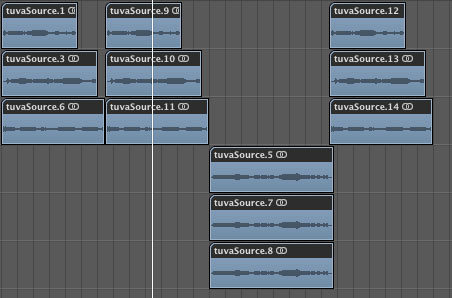 Now that we have a basic arrangement laid out, we'll begin working with some plugins. In Logic's Mixer window, we'll add two new Auxiliary Channel Strips which will act as our FX Busses. Because these are now Bus tracks, we'll set the input channel for each one to its corresponding bus - Bus 1 and Bus 2 respectively We'll also add these new channel strips to the arrange window via the same Mixer->Options menu. 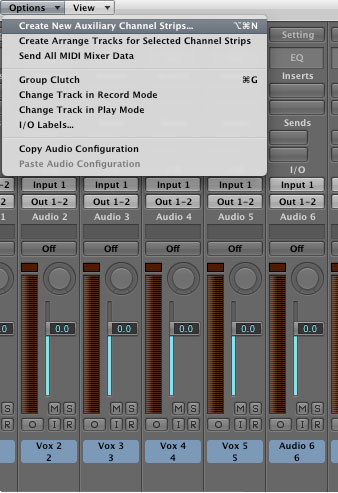 In Aux 1, we'll to add a reverb that will be used for all the vocals. I've chosen to use Logic's Space Designer reverb, with the preset "Big Cave", which emulates a large cavernous space with a long (8.5 seconds!) decay.

For each of our Vocal tracks (1-6), I'll set the first Send to Bus 1. This routes the vocal channel signal to the Reverb Bus. For each track I've set the send level to a value somewhere between -12 and -6dB.

Here's what the first section sounds like with a simple reverb:

With three unique vocal samples, this already sounds pretty good, but to add a bit more depth and variation, we'll experiment with some spectral effects and Logic's Vocal Transformer.

In the second Aux Channel, we'll add an instance of Spectral Gate And Hold - another of my favorite plugins from the SoundMagic Spectral by Michael Norris. I've spoken of these plugins in other tutorials, but they work extremely well for ethereal, otherworldly sounds.

Without going into too much detail about FFT and Spectral Processing, here's a quick blurb from the user guide for the SoundMagic Spectral Suite:

SoundMagic Spectral is a suite of freeware Audio Unit plug-ins that offer exotic real-time spectral processing effects, along with a few time-domain effects...the main difference between a time domain process and a frequency domain (spectral) process is that spectral processes have two extra steps involved in the processing of audio: spectral conversion and reconversion. Firstly, the effect converts the raw sound data into a "spectral representation," a series of numbers representing the strength of the frequency components within the sound at various points before processing. Then, after operating on the spectral data in some manner, it reconverts the spectral representation back to a time domain representation (sound file format)...The frequency domain representation of audio consists of an array of frequency bands (called "bins"), equally spaced across
the spectrum from 0Hz up to the Nyquist limit (sampling rate/2).

With this in mind, we'll make a few adjustments to the default settings of this plugin. We'll set the threshold to -40dB, which ensures that all bins above this frequency will be affected. We'll set fade-in and fade-out lengths to 3 seconds, Bin shift to 12, and FFT Size to 8192. Beware of setting this too high on slower machines - it is a CPU intensive process. 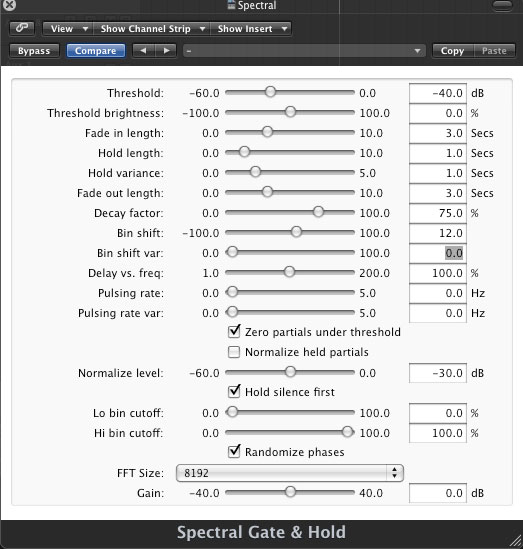 For our next step, we'll route some of our vocal track to the Spectral Aux Channel. The spectral FX can quickly overload the mix, so in this case less is definitely more. We'll send a signal of -2dB from Vox 1 and Vox 4. 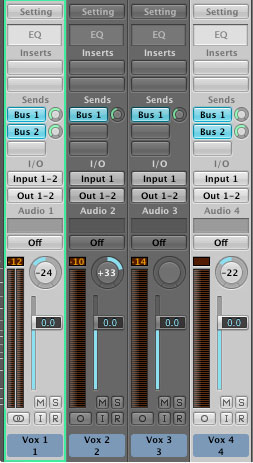 We're nearly finished, but in listening to the mix, the B section still sounds too similar across the three tracks. To remedy this, we'll use the Vocal Transformer plugin to slightly modify the formant of two of the channels. We'll also slightly offset their start times, so that the phrasing doesn't overlap and create phase issues.

Adjusting formants can be rather crude, so use small increments to find the setting that works right for your piece. In this case, I've chosen to offset Vox 5 by -2 steps, and Vox 6 by +6 steps. 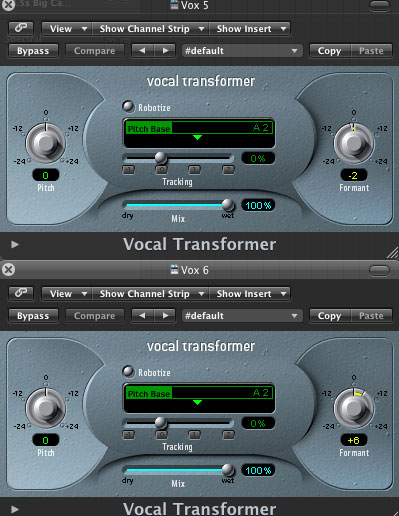 We'll make some minor adjustments to offset the start and endpoints of our samples, resulting in this new arrangement. 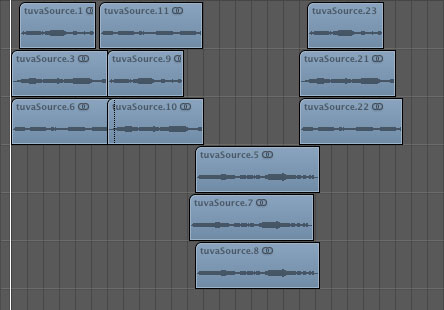 The final mix is an interesting blend of organic and synthetic. Enjoy!