Logic Studio provides fantastic value for the hobbyist and professional musician alike. With over 18,000 loops, it also provides a huge variety of samples that can be used to lay the foundations of new songs, beats and scores.

That said, it is easy, in the world of digital audio, to become a victim of 'preset-itis' - using loops, samples, and software instrument presets that can be heard throughout today's film, television and popular music. With just a few simple tricks up your sleeve, however, you can turn boring, heard-it-a-million-times presets and turn them into something unique.

While the hip-popular music has recently bastardized the vocoder through overuse, misuse, and downright abuse, Logic's EVOC 20 PolySynth has features far beyond what are commonly used. One of my favorite techniques is using a vocoder in a way that harkens back to our tutorial on using Noise Gates. In this tutorial, we'll look at a simple way to use some of Logic's rhythmic loops, EVOC 20, and some simple plugin presets to create something more interesting than a factory rhythm.

First we'll set up two tracks in Logic - one audio instrument track and one standard audio track using the Track -> New... menu. In the instrument track, we'll insert an instance of EVOC 20. In the audio track, we'll add a drum loop from Logic's library. For this example, I've selected House Deep Tribal Beat 01 - sounds like a preset to me! Drag and drop the loop onto your audio track, and voila! 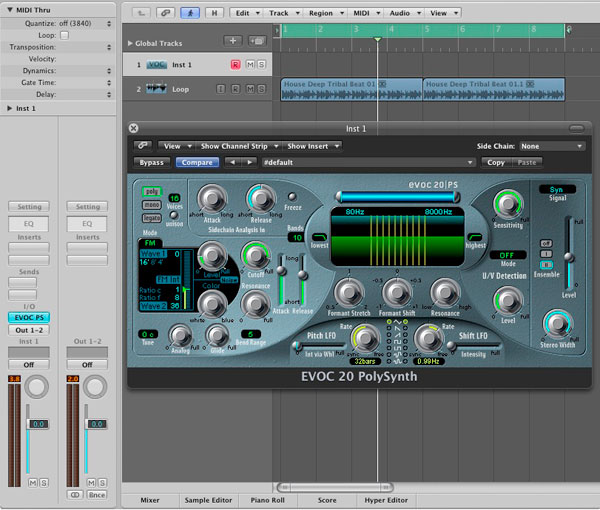 EVOC 20 is a polyphonic synth in its own right, but for the purposes of this tutorial, we'll just use a preset to show that simply combining several presets interesting ways can actually result in something unique!

We'll use EVOC 20's 'Atmospheric Pad' preset, selecting it from the dropdown menu. In the sidechain menu, we'll select Audio 1 as the sidechain input. With this selection, EVOC 20 takes the analysis signal - in this case the drumloop - and transfers its sonic characteristics to the synthesis signal. 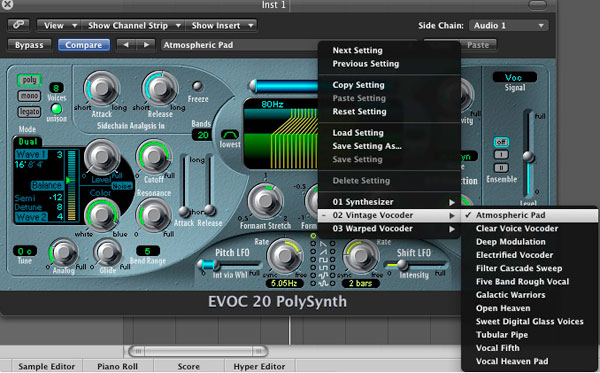 Before proceeding to step 3, we'll turn the volume of the audio loop track down all the way. This means that while EVOC 20 will still be able to analyze the signal, the original loop will not be heard in the mix.

Next we need to record some MIDI data into the EVOC 20 instrument track. This provides us with the synthesis signal, against which the analyzed drumloop signal will be applied. You can record notes from an external midi controller, or draw them into the Piano Roll editor. Here's my simple chord progression. 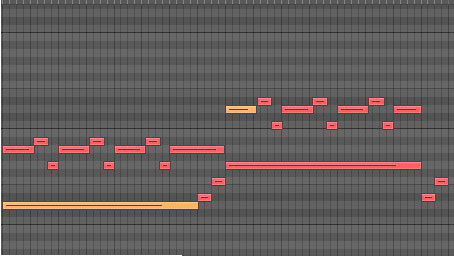 You'll notice that as you play, you'll hear the sound of the EVOC 20 synth being 'gated' by the rhythmic pattern from your drumloop track.

To create a greater sense of motion through the piece, we'll next make a few subtle changes to our drumloop track. Remember that EVOC 20 is using this as the analysis signal, so any changes we make here will be reflected - though perhaps in ways you might not expect - on the synth track.

We'll begin by inserting an instance of Logic's Vocal Transformer plug into the first insert slot of our drumloop. We'll leave the settings at their defaults, but reveal Automation for this plugin in the Arrange window.

By adding some simple automation curves to the Formant parameter, we can easily change the tonality and feel of the EVOC 20 synth. 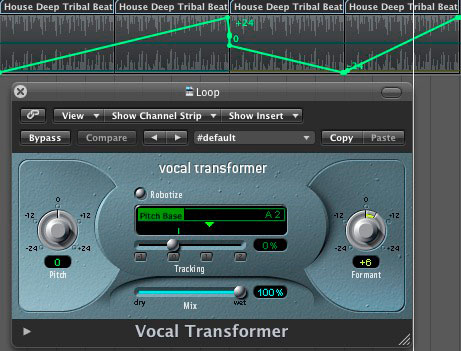 For the last piece of automation, we'll make some simple sweeps of the Formant Stretch and Formant Shift parameters of the EVOC 20 synth.

We'll expose a second layer of Automation data for the synth track by clicking the small arrow to the lower left corner of the Arrange Track. Then we'll draw a few simple automation curves, resulting in sweeping variations.

Our mix so far is a bit thin, so I'm going to add two additional plugins - using only presets - to broaden the sound.

First we'll add one instance of the Stereo Spread effect to the EVOC20 channel - leave the preset at its default.

Secondly, we'll add an instance of the Stereo Delay plugin, again using its default settings. The result is a much more full sounding synth bed.

Here we are, with a nice synth bed created from a few presets and some simple automation. All we need is a little something to back it up!

I've recorded a simple off-beat bassline, and added a simple trance loop from Logic's library. The result is a nice little trance riff composed simply of a variety of Logic presets with a few simple automation parameters.

I hope this tutorial has given you, my fair reader, a few simple ideas on how to turn boring presets into something unique. Stay creative, keep your ears open, and keep making noise!