If you fancy a bit of departure form virtual analog, subtractive synths you could try dabbling in FM (Frequency Modulation) synthesis. Native Instruments FM8 is the perfect way to get involved with this edgy sound creation method. Let’s take a look at how to create a typical roughed up bass patch that you could use for Electro house or Dubstep.

I’m using Logic Pro 9 here and FM8 as an Audio Unit plug-in (installed as part of Komplete 8 Ultimate). Don’t worry if you are using a different DAW as long you have FM8 installed you should be able to follow this with no problem.

I am going to assume you know a little about FM synthesis here (or at least what it is) as this is a tutorial about creating a sound in FM8, as opposed to how it creates sound! But I’ll keep things simple and aim it at people picking up FM8 for the first time.

Even the relative beginner can get into programming the FM8, so don’t worry too much about the fine details. If you are interested in the ins and outs of FM I suggest a little bit of background reading before you get going. Wikipedia is a good starting point.

Start by choosing some ‘Operators’ in the expert section (don’t be put off by the name). These are essentially the equivalent of a analog synth’s oscillators and are the FM8’s sound source. 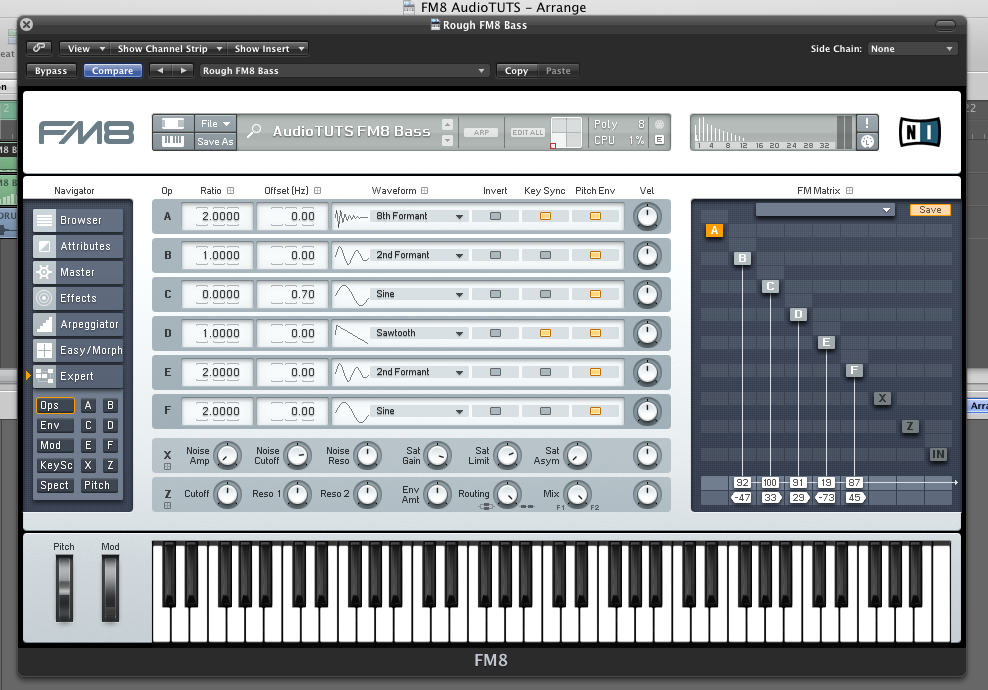 Choosing some Operators in the ‘Expert’ area

I’ve chosen an interesting collection of Operators here and changed the offset and tuning of various entries. Don’t worry if things sound a little bland and mundane at this point, the sound will start to take shape in the next step.

The basic mix of Operators

Even though we have got a good mix of Operators and most of them are being fed to the synth’s output the sound needs to be brought to life. Fm8 produces more interesting timbres when feedback routings are created in the Matrix area.

I have created a number of feedback routings and there was no actual pattern used here, it was simply a case of trial and error. I kept adding routings and changing amounts until I reached a sonic texture that flicked my switch.

Generally speaking the rule of thumb is the more routings you use the more intense the sound will be. And it goes without saying that the feedback amount also plays a pretty large part here too.

The patch with some feedback added

My advice would be to spend time experimenting with different routings. There are preset Matrix settings and you can save your own as well, so you can always move backwards and forwards between different creations.

With a heavy synth like this I just love to add a whole lot of pitch bend. Heavy pitch slide somehow remind me of guitar parts and can sound really technical. Once effects and overdrive are added at a later stage they become even more effective.

I’ve added the pitch bend in the mod section, under the expert tab. You simply sleet pitch bend and add the amount you want to the master pitch. It may seem a little different than the way it’s done in other synths but it is pretty straight forward. 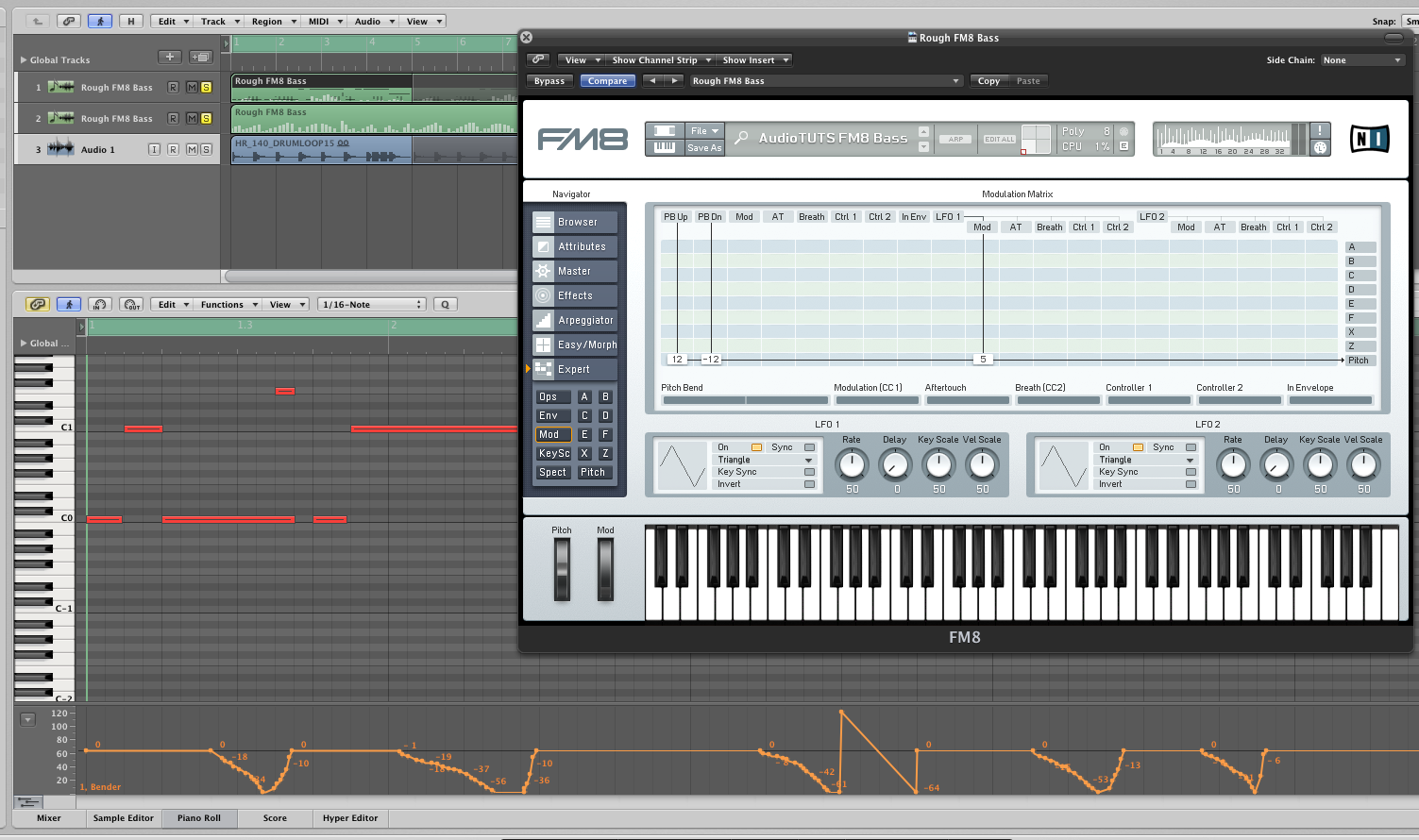 The pitch bend is hooked up and recorded into Logic

Some pitch bend data was then recorded into my DAW and the effect was in place. Now let’s tweak the sound a little more before some critical effects processing is added.

The patch with the pitch bend applied

In the master section of FM8 there are a number of really tweakable parameters that make enhancing your patches really straight forward. At this point I altered some settings here to make the patch slightly more impressive.

I made sure the patch was in mono mode, then added some dynamic unison. I spread the stereo field here and added some pitch based de-tune as well. This was all followed by a decent dose of portamento for a little extra interest and I also increased the analog and digital qualities of the patch.

The master section parameters being tweaked

Things were starting to come together at this point but what would a good synth patch be without some heavy effects processing!

The patch with the extra edits in place

I used quite a few of FM8’s internal processors here but you can obviously use more if you prefer. There are no distortion or overdrives used and some people like a bit of extra crunch, so it’s there if you need it. 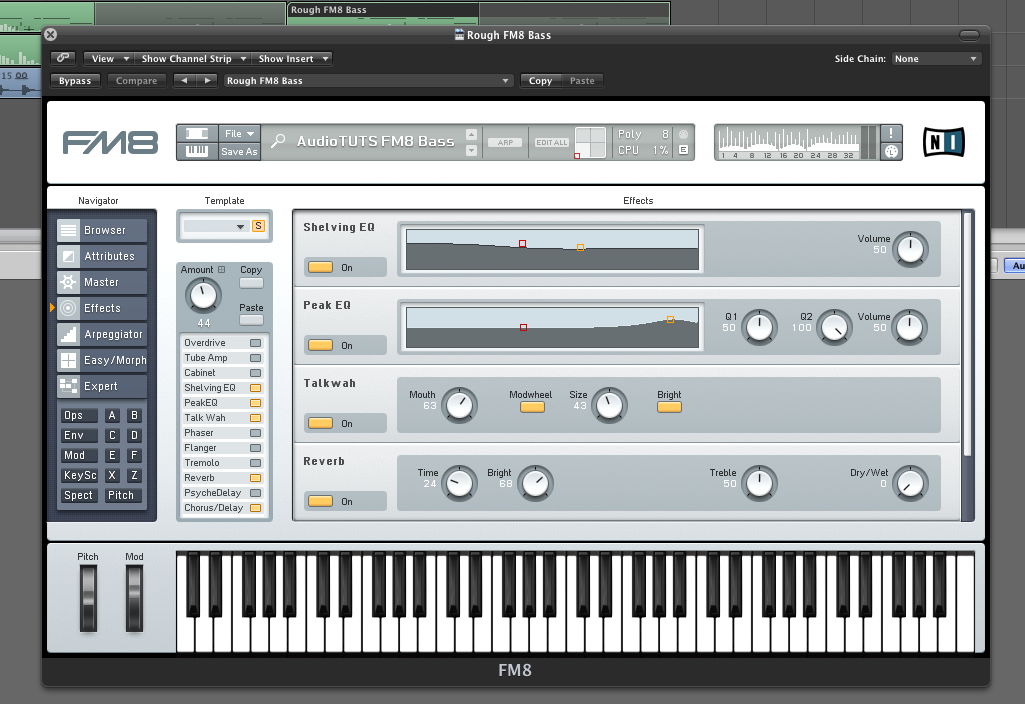 The effects processors are engaged

I did use quite a bit of EQ to pump up the low and high frequencies. I also used the talk-wah to get the ever popular formant mode / talk box effect. The mode wheel was linked directly to this effect and some data was recorded into the DAW as well.

The only down side to the processing here is some body and low end is lost but you could always layer a sub below the synth or an extra instrument to beef things up a touch. In the final example I used a lot of low EQ to re-introduce the low end.

Some EQ is added to re-introduce some low end

The final patch in isolation

Finally I added some reverb to add a little space and dimension. The patch was now done and you can hear the finished thing playing back with some simple Dubstep style drums below. Hope this gives you an alternative to all the virtual analogs out there. Have fun making your own FM based patches!

The patch with some basic Dubstep drums