Managing your Pro Tools projects is just as important as knowing how to mix them. Without taking the time to learn these skills, you’ll end up with folders that are gigabytes larger than they need to be, confusing sessions that look foreign when you come back to them months later, and you’ll spend ten times as long working on your mixes. Let’s avoid these problems with some techniques I’ve learned during my time with Pro Tools.

Without a doubt, one of the biggest nuisances with digital multi-track recording is the massive amount of hard drive space each project takes up, especially after doing tens of takes on each instrument! I try to keep things tidy during the recording process, though you do need to be careful not to delete the takes you wanted to keep, and be sure that you won’t want the takes you’re not using later on.

Go to the Regions list to the right of the Edit window in Pro Tools. It’s probably best to widen it so you get a good view of what you’ll be deleting. Here’s a screenshot of an incredibly disorganized project’s region list: 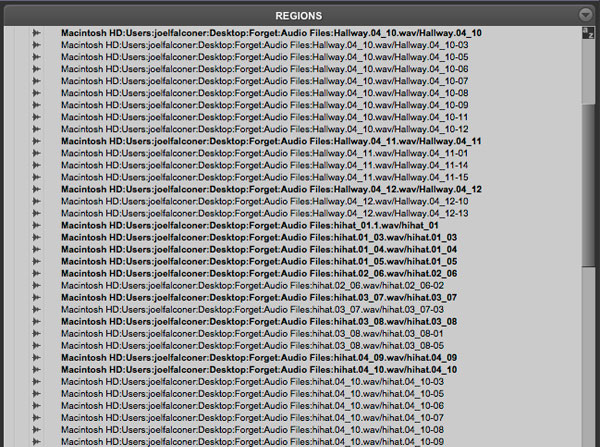 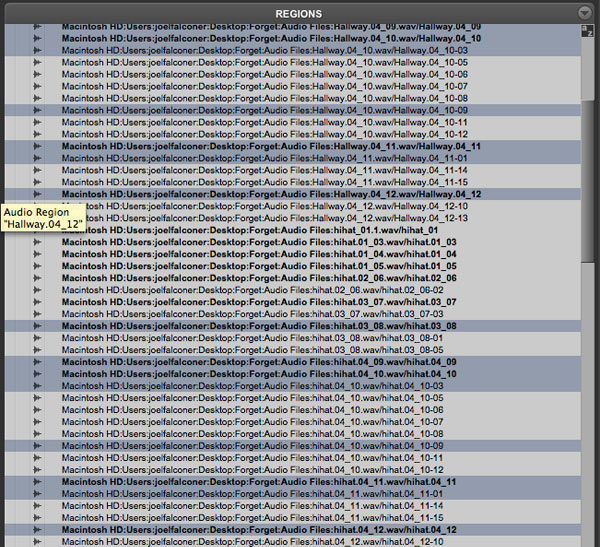 Now go back to the drop-down menu and click on Clear. You’ll see the following dialogue box:

It’s important that you click Delete and not Remove if you want to clear hard drive space. Remove will simply take the files out of the list, leaving them in the folder, and making it really difficult to get rid of unused files later on. If you have lots of audio files to delete, it can get tedious confirming each deletion — holding the Alt button while confirming will delete all files in one fell swoop.

Backing Up Your Session

Pro Tools automatically backs up your project file, so any non-destructive changes can be reversed later on (audio files are not backed up, so destructive changes truly are destructive and final). It’s also easy to drag-and-drop a copy of your project folder from your computer to an external hard drive, or burn the session to CD. But what happens if you lost your Pro Tools CD? Or your Digidesign or M-Audio interface stopped working, meaning the draconian protection measures Digidesign makes use of will prevent Pro Tools from opening at all?

You could spend a decade sorting out your Audio Files folder, especially with editing and crossfades to consider, but there’s a much easier way to prevent this scenario from occurring. It’s not a fun process, but it’s much better than the alternatives. We’re going to save copies of each track’s audio in a way that they can easily be imported into another DAW without spending hours trying to get the timing of each audio file right.

First, we need to get each of our tracks prepared for back-up. Most tracks look something like this:

The track is split into many regions and hence audio files, which will make life hard in the event of an emergency. You’ll also note that this track doesn’t start playing for quite some time after the start of the song, which will make putting in the right spot quite difficult. The solution is to consolidate the region.

Make sure no groups are currently selected. Select all tracks (Ctrl+A on PC and Cmd+A on Mac, or Edit > Select All) and then go to Edit > Consolidate. Assuming everything has been selected between the start and end points, this will turn each track into one audio file, and all these audio files can be inserted at the start of a new project and everything will line up perfectly. Here’s what the track I showed you before looks like now:

At this stage, follow the steps in the first section of this article to clear our unused files. You’re now left with one audio file for each track, so by copying the Audio Files folder in your Pro Tools project folder, you can backup every bit of audio you’ll need to import into a new project or another DAW.

If you find the Region list still contains more files than your project has tracks, you may have excess playlists. Click on the small arrow next to the track name:

Click Delete Unused, and then select all playlists you don’t wish to keep and confirm their deletion. You’ll then need to repeat the steps required to delete unused files from the Region list.

Optionally, at the end of this process you can zip the Audio Files folder. This makes archival a little simpler, and more space efficient, than keeping copies of the folder. Be warned that it’s also slightly easier to end up with a corrupted backup this way, simply because everything is in one file. It’s much easier to retrack one instrument because a particular file in an unzipped folder was corrupted than to start recording the song from scratch in the case that your zip file goes bad.

The Audio Files folder is notoriously difficult to make sense of. Compounding this problem is the fact that most Pro Tools users don’t bother to set up naming conventions from the very start of the project. The earlier screenshots showed a project that, while it had some track names in place, wasn’t terribly organized at all. It’s terribly easy to get around the problem of disorganization.

The rule is that files are named after the tracks they’re recorded on. So, the best thing you can do is create all the tracks you know you’ll need at the very start of the project, before you’ve recorded a single take, and name them all. If you name the tracks after you’ve started recording, those files will not take on the new track name.

Next time, we’ll continue looking at Pro Tools project management, but we’ll cross from the drudgery of file management to organizing things so that it’s easier to mix and comp by exploring groups and playlists.